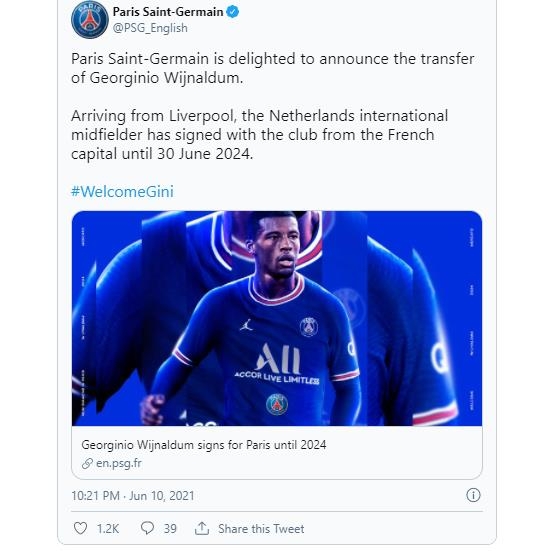 PSG announced the signing of Wijnaldum on the club’s website on the 10th (local time). The term of the contract is 3 years until June 30, 2024. Wijnaldum’s contract with Liverpool expires this month and there is no transfer fee.

Growing up in the youth team of his hometown Sparta Rotterdam, Wejnaldum made his professional debut at Feyenoord (Netherlands) in the 2006-2007 season. .

At first, it seemed likely that Wijnaldum would move to Barcelona (Spain) under Ronald Koeman. Koeman, who was from the same Dutch national team as a coach and player, also wanted to sign Wejnaldum.

However, recently, PSG, led by Mauricio Pochettino, turned their minds to Wijnaldum by offering better conditions than Barcelona. It is also known that manager Pochettino personally contacted Wijnaldum and persuaded him.

“The contract with Paris Saint-Germain is a new challenge for me,” Wijnaldum said on the PSG club’s website. “I have joined one of the best teams in Europe. I want to put my all into the team’s ambitious project.”