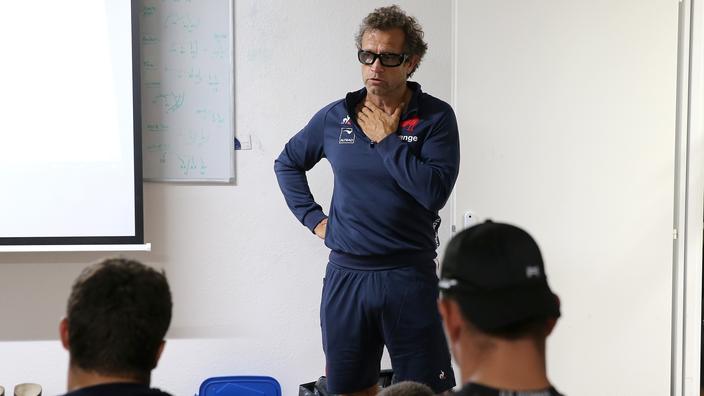 The coach of the XV of France evokes the situation of the Blues, who must compose without several notable absentees, before the start of the Six Nations Tournament, on February 6, against Italy.

Do you approach this tournament with the pressure of the result following your good results in November?
Fabien Galthié: After the series of matches that we have played, we feel a very strong enthusiasm around the France team, a very happy, benevolent expectation, support too. At the start, when we took on the mission (to lead the France team), we decided to federate, gather and share. It’s in line with what we wanted to do with this team. That’s how we feel.

What is the medical news of the players you have called up and of those who have been injured or affected by the Covid?
So far, training is going well. We still have a big training session later (Wednesday afternoon) at 15 against 15, the 42 players will participate. We had to change our selection since 10 players were forfeited last week. We called 10 other players and we have worked well since Monday. We will release 14 players at the end of the afternoon around 6 p.m. They will join their clubs. And we will give back a group of 14 players that we will call on Sunday evening morning, knowing that we are waiting for the weekend matches in case there are injuries. The information about the players who have been forfeited is generally very positive.

Did the absence of many executives impact your week of preparation?
For them, it also counts … These ten players who did not come, it is sad for them. For us, it is sure that it is something that we must take into account. But we have learned to manage crisis situations over the past two years, especially during the Autumn Cup and the tour of Australia. We are starting to get used to crisis management. But it allows us to transform problems into opportunities, it allows us to progress in a form of imbalance. This makes it possible to highlight players that we would not have summoned immediately. They touch experience. We feel that they can match with our team very quickly. We are transforming this crisis into an opportunity, one to progress, two to find new nuggets, three to make this France group as solid as possible no matter what.

Have you heard from Antoine Dupont? Do you expect him to play this weekend?
I got him, we traded, he’s fine. He has been back in training for two weeks now. He wanted to play (against Cardiff in the Champions Cup), but he tested positive for Covid. But he’s fine, he’s still training. Today (Wednesday) he has a test at his club. Depending on the results, he will play with Stade Toulousain or not, it is the decision of his manager. I trust him to make the best decisions for his team and for Antoine.

Antoine Dupont also brings all his character, he imbues the players with his high standards, his ambition. He can make other players of the France team want to be elected to their very best player in the world

What place has Antoine Dupont taken within the French team for two years?
He has become, in the team, a leader, a good partner, a good teammate. He is an exemplary player, not only because he runs well with the ball but because he defends well. It performs a lot of tasks that are not seen and are not brought to light. He contributes enormously to the collective performance whether in attack or defense. He also brings all his character, he imbues the players with his high standards, his ambition. He can make other players from the France team want to be voted their very best player in the world. It is possible because it was. In our group, we have players who can be ambitious and go for that title. It will be beneficial for the team. It is the team that carries the players to this supreme title, this great recognition. It is a combination between the individual and the collective.

For Italy coach Kieran Crowley, France are the team in form at the moment. What are the expectations of the XV of France?
We are very happy and very proud to be considered in this way by the microcosm. It affects us positively. We had good performance in the fall. But if we look at our adversaries, starting with the Italians, they are Latins and they are capable of seeking virtues. They have everything to gain, it’s already a team that arrives with a particular profile. He is our first opponent. Then we have Ireland who are undefeated since last February, their last defeat was against France. Since then they have won all their matches, including England during the Tournament, they have won in Scotland and also against the All Blacks. They too are capable of doing great things this year. They are ahead of us in the world rankings. Behind, we will continue with the Scots, the Welsh and the English. So many teams that are capable of winning the Tournament. Today rugby in the North is very competitive.

Bernard Laporte is a great president. And that he has done great things for the Federation and for all rugby fans since he has been in charge

What is your view on Ireland, your first game on matchday two?
They are on a very positive dynamic. They have been undefeated since February 2021. We also see that they have good results with their provinces: Leinster, Munster but also Ulster and Connacht. There is a positive dynamic in their elite rugby which benefits their national team. It is a very strong adversary that it presents itself in this Tournament.

Regarding the affair which affects Bernard Laporte, you said that when you touch Bernard, you attack the institution and the France team. Can you clarify your thought?
Indeed, I answered on this subject that Bernard is a great president. And that he has done great things for the Federation and for all rugby fans since he has been in charge. The French Rugby Federation is an institution and we are all committed to this mission of making the institution shine. Share, federate and unite around our common passion.

Anne Hidalgo in favor of recognizing the white vote