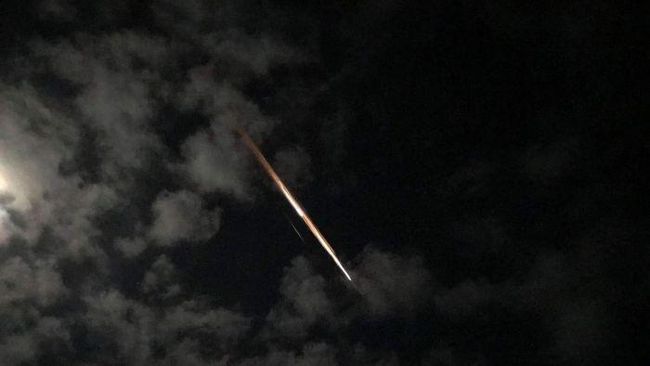 Jakarta, CNBC Indonesia – Some time ago a video appeared on social networks showing the passing of a bright light, from Noosa to Bundaberg, two areas in Queensland last Thursday night.

Regarding this, an astronomer explained that the strange and bright lights appearing in the sky in the Northern Territory and Queensland confused hundreds of people.

Quoting ABC Australia, Friday (26/2/2021), University of Queensland Astrophysicist Jonti Horner said that the debris was space debris from a rocket, named Chinese Long March 3B, which launched a navigation satellite in 2019.

He said the space debris was estimated to be 12 meters long by 3 meters wide when it entered orbit and began to separate. So it’s a pretty hefty chunk.

“This object has reached the earth and is getting lower and lower its position because of the atmosphere. Finally, this object caught fire last night, and its nature is not dangerous,” said Harner.

Professor Harner said these parts of the rocket began to gradually separate while they were in orbit. The remaining part of the rocket may also have escaped into the atmosphere, but because it takes more time to burn, has become burning debris.

Professor Horner said the rocket was predicted to land in the Pacific Ocean.

He also said tracking celestial debris is a tough job because of the space debris payload that threatens the existence of active satellites.

“Citizens all over the world are watching space debris all the time. (They) try and predict whether any satellites are in danger,” he said.

See Also:  The Science Behind a Mountain Can Continue to Grow Tall or Drag

Usually the International Space Station will perform several maneuvers throughout the year to avoid possible repercussions.