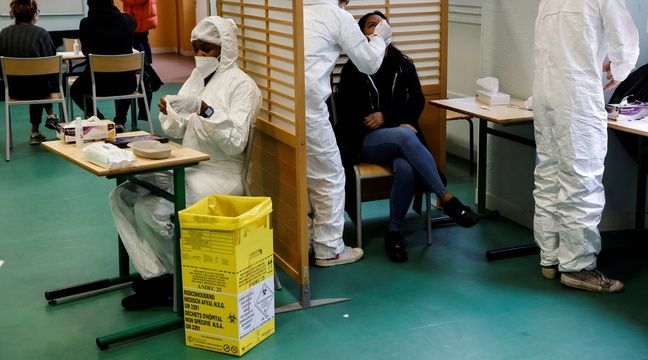 Over the past seven days, the number of virological screening tests for coronavirus in France has fallen sharply for the second week in a row. Between November 16 and 22, around 1.4 million virological tests (RT-PCR) were carried out, against 1.8 million the previous week and 2.3 million at the beginning of November, indicates the Directorate of Research, Studies , evaluation and statistics (Drees).

What is this decrease due to and should we be worried that the epidemic is escaping us again? We put the question to Eric Billy, researcher in immuno-oncology in Strasbourg and member of the collective “on the side of science”.

How can we explain this decrease in the number of tests in France?

There are two joint explanations. Since the incidence of the virus is falling, there are fewer patients, fewer symptoms and contact cases, and therefore naturally fewer people getting tested. City doctors in particular say they are prescribing fewer tests. It is therefore normal to have a drop in the number of tests, which is consistent with the drop in other indicators: fewer patients, fewer hospitalizations, fewer resuscitations, etc.

The other explanation is the massive deployment of antigenic tests, which partly replace PCR tests. However, the results reporting system is for the moment incomplete and suffers from dysfunctions, so that not all the results of the antigenic tests are reported in an efficient and transparent manner.

Some pharmacists and laboratories use the SI-DEP system to enter PCR and antigen results, a system that ensures good feedback to Santé Publique France. All PCR tests are reported by SI-DEP and are therefore counted, but the antigenic tests carried out by independent doctors, certain pharmacists and nurses in particular, are sent back by an application, ContactCovid. In fact, not all antigenic tests come back. The figures of the Public Health France tests are the addition of the PCR and antigen tests which have managed to go up, so it is an incomplete figure and the number of tests and positive cases is probably underestimated.

The decrease in the number of tests and patients would therefore be distorted by a problem of recovery?

There is definitely a drop, but it may not be as big as you think. And the data is incomplete. For example, most of the time, the percentage of positivity is not given for antigenic tests nor the total positivity (antigen test + PCR test).

We can see that the positivity rate for PCR tests is dropping, currently at around 12.5, which is a clear drop even if it should be remembered that in June, we were at less than 2.5% and that – above 5%, the virus can be considered to be actively circulating.

Should we question antigenic tests?

No, it’s a good thing to see the massive arrival of antigenic tests which are more oriented towards contagiousness: we know directly if we are sick so we can therefore adapt our behavior instead of waiting for a result in 24 hours, or even 72 hours or even a week by PCR. These are faster, cheaper tests. We also hope to see the arrival of other types of rapid tests, such as those based on saliva sampling and LAMP technology, which are even less expensive and require fewer staff for the samples. We just have to settle this problem of ascent and have complete figures.

France therefore currently has more testing capacity than it performs. Is this a waste?

We should take advantage of this “lull” and have a large testing capacity to improve our test targeting. All-out testing is useless and unsustainable in an effective strategy. We could therefore take the opportunity to start testing the pooling : we test in the same tube the associated samples of 10 people at once, in case of positivity, we repeat the test for each individual to see who has the Covid. We would test it now in order to be able to apply this strategy correctly, which is much more effective for large-scale and rapid testing of a cluster area for example, once the virus circulates again at low noise, with a test positivity of less than 5 %.

See Also:  No return to the »Red Monastery« (neue-deutschland.de)