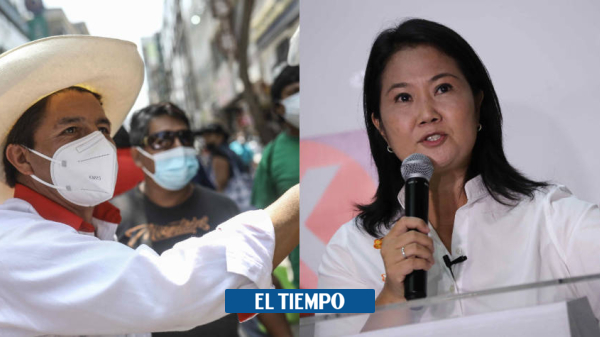 The presidential candidates in Peru, Pedro Castillo Y Keiko Fujimori, were located in a technical tie, with 42.6% and 41.7%, according to a survey carried out by the Datum company, just over a week after the second electoral return June 6.

(Read here: Terrorism on the eve of elections, a constant in Peru)

About Fujimori, 65% affirm that their apologies about the performance of their party in Congress are not sincere.

According to the study, carried out under the modality of a mock voting that deducts null and blank votes when adjudicating results, Castillo, of the leftist Peru Libre party, lost 2.9 percentage points compared to another simulation applied a week earlier. , while Fujimori of the right-wing Popular Force has grown by 1.6 points.

In the drill, held between May 25 and 27, date He asks his sample of 1,201 people to materialize their vote in a ballot issued by the pollster.

The technical tie comes after the debate of the teams of experts of both applicants and that, according to 54% of those surveyed by Datum, Fujimori’s team won, while Castillo’s team obtained 26% of preferences.

It also occurred after the attack that last Sunday left 16 people dead, including four minors, in the Valle de los Ríos Apurimac, Eme and Mantaro (VRAEM) area, dominated by drug trafficking and where the remnants of the terrorist group operate. Shining Path, converted into custodians of drug trafficking.

46% do not believe that Castillo implements a type of government like that of Venezuela, against 40% who do.

When consulting the voters’ voting intention, Datum found that Castillo had 41.6%, about 3.3 percentage points less than the previous week, while Fujimori rose to 41.5%, 1.4 points more.

However, 10.9% indicate that they will vote blank or flawed, while 6% remain undecided. 77% of voters are decided on their vote, while 16% are thinking about it, 5% have not thought about it and 2% do not know.

Regarding the main campaign incidents, 46% do not believe that Castillo implements a type of government such as that of Venezuela, against 40% who do believe it, and 43% affirm that Movadef, the political arm of the armed gang Shining Path, it is among the organizations that support it.

On Fujimori, 65% affirm that their apologies about the performance of their party in Congress, which led to the closure of the Legislature due to its permanent opposition to the government measures, are not sincere, however, the government proposals of its technical team were supported mostly in the survey.

The simulation of voting and the survey of voting intention and incidents of the campaign were applied to a sample of 1,201 people nationwide, between May 25 and 27, with a margin of error of 2.8% and a level of 95% confidence.