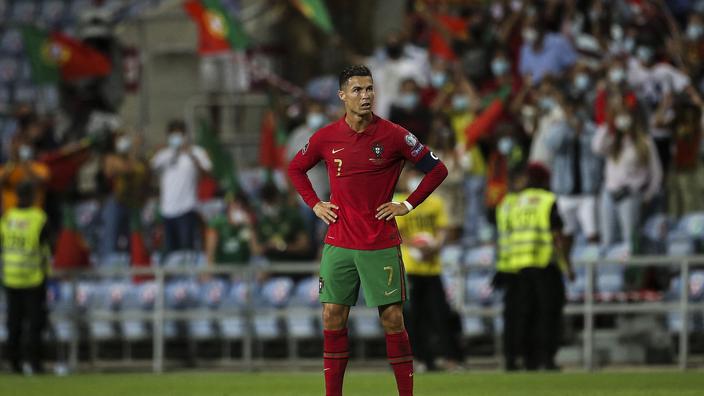 Top scorer in the history of selection football since Wednesday, the Portuguese continues to chase records.

Cristiano Ronaldo entered football history a bit more on Wednesday. By delivering his own at the end of the night against Ireland (2-1), the captain of Portugal became the only top scorer in history in the selection with his 110 and 111e goals, overtaking Iranian Ali Daei and his 109 achievements. “It’s not a new record broken, it’s a new record that I’ve been looking for“, Tweeted CR7 accompanied by a promotional clip where former teammates evoke his total dedication to football. “What is important, no matter what you want to accomplish in life, is to set goals so that you always have a goal to achieve.. ” And Ronaldo, engaged in the endless debate on the “GOAT” (best player of all time) with the neo-Parisian Lionel Messi, carburizes with an insatiable quest for records. Back at Manchester United, his favorite club, he could set off to conquer records on British soil, while eyeing new ones with the selection. Here are five that can still be reached by the Madeira native.

Champions League: future player with the most cap, then the most successful?

After his repeated failures with Juventus Turin, will Ronaldo return to the top of the European scene with Manchester United? The arrival of the top scorer (135 goals) and passer (42 assists) in the history of the competition inevitably puts the Red Devils back in the game of the favorites. The Portuguese, who will find his favorite number 7, will also sign his return to Old Trafford in C1 on September 29 against Villarreal, the evening when he will become the most capped player of the event with 182 matches, that is to say one more. than his former captain Iker Casillas. But this is a whole different record that dreams of Ronaldo, already holder of five Champions Leagues. Currently in good company (Maldini and Costacurta with AC Milan, Di Stéfano and Zarraga with Real Madrid), Ronaldo would join the Spaniard Francisco Gento, the only winner of six Champions Leagues, between 1955 and 1971 with Real Madrid. The Portuguese would thus offer a fourth C1 to Manchester United, with whom he enjoyed European glory for the first time in 2008.

2008 was a particularly prosperous year for the Lusitanian striker, who was more generally on the left wing at the time. This had not prevented him from signing his first season of the first order with a victory in the final of the Champions League, where he had scored the only goal of his head against Chelsea. Enough to win the first Ballon d’Or in a long series, first disturbed by Lionel Messi (winner between 2009 and 2012) before CR7 sets the record straight with the 2013, 2014, 2016, 2017 soundtracks However, his generational rival regained the advantage with a sixth Ballon d’Or in 2019 and looks set to clinch a seventh since his Copa America title. Enough to stir up his rage to win?

During his first adventure with Manchester United between 2003 and 2009, CR7 was crowned top scorer only once. During his auspicious year in 2008, the Portuguese scored a trifle of 31 goals, winning in passing his first European Golden Boot (he has 4 with the 2011, 2014 and 2015 seasons against 6 for Messi). If it will be difficult for him to seek the record of Thierry Henry, top scorer in the championship four times, Ronaldo could seek the record jointly established by the British Andy Cole (1995) and Alan Shearer (1996), both authors of 34 goals in one season. He would still have to shoot at least one goal per game, since he only has 35 games left with the Red Devils.

Back in the club where he has revealed himself since his arrival at 18, Cristiano Ronaldo said to himself “happy and eager to reunite with Old Trafford“. And to bring back a first title since 2013, the date of Sir Alex Ferguson’s last freelance, who would have convinced him to come home? In case of 21e title of champion, Ronaldo would undoubtedly be among the contenders for the title of best player of the season. Honored by his peers in 2007 and then in 2008, the 36-year-old striker, if he were to be elected Player of the Year, would thus become the oldest player to receive this distinction but also and above all the first to win it for the third time. He would then succeed his compatriot Ruben Dias, winner of last season after a brilliant first season under the colors of Manchester City.

Read alsoPlatini now in the retro, Ronaldo still chasing records and the effects of time

The Euro is Ronaldo’s favorite international competition. His first triumph with the Seleçao, in 2016, marked the love story of the Portuguese with the competition he had discovered at home in 2004. 20 years later, on the occasion of Euro 2024 which takes place will hold in Germany, the native of Funchal, who will then be 39 years old, could become the very first player in history to participate in a sixth European Championship, thus surpassing his ex-partner Iker Casillas (five Euros between 2000 and 2016 ). Already record holder for the number of matches played in the competition (24), the Portuguese captain is also the top scorer since the last Euro and the match against France, where he scored twice on penalty (2-2). Co-top scorer of Euro 2020 with five goals, CR7 brought his total to 14 units, five more than Michel Platini.

«I don’t plan on stopping there“Ronaldo told Seleçao supporters after his 110 and 111e goals scored in the World Cup qualifiers. A competition that still covets, like Leo Messi, the Portuguese. Off to a good start in their qualifying group, the Portuguese should, barring any great surprise, travel to Qatar in a little over a year for the 2022 World Cup. By participating in his fifth World Cup, the former Real player would join the closed club of players to five participations including the Mexicans Carbajal and Marquez, Lottar Matthäus and Gianluigi Buffon. Above all, Ronaldo would covet the international holy grail and the only title he lacks (he also won the League of Nations in 2019). To do this, he will obviously have to stack the goals. From there to catch up with Miroslav Klose’s 16 World Cup goals? The equation is simple: he will need to add at least 9 goals to his current total of 7 goals. Impossible is not Ronaldo …