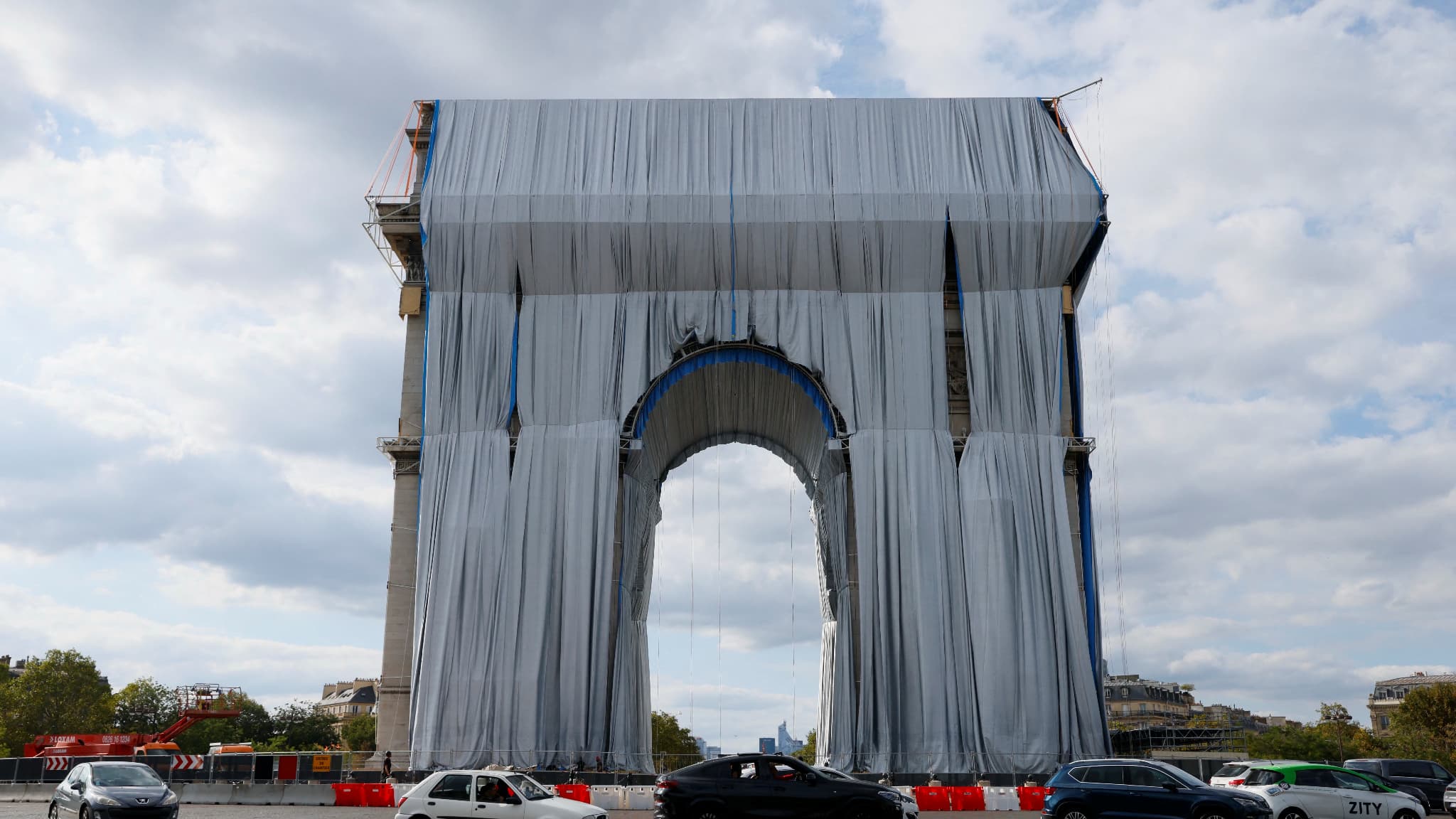 While the Arc de Triomphe is packed until October 3, back in pictures on other monuments that have been hijacked by artists.

The youthful dream of Christo (died in May 2020) and his wife Jeanne-Claude, finally realized. The Arc de Triomphe, 50 meters high, has been packed. From September 18 to October 3, the Mecca of French commemorations is to be discovered completely transformed into a gigantic gift package, held by 3000 meters of red rope. In 1985, Christo had already packed the Pont-Neuf in Paris, spanning the Seine.

On this occasion, we will take a look back at the works of other artists who had fun taking over well-known monuments.

• JR and the Eiffel Tower

Last May, the Frenchman JR unveiled an ephemeral trompe-l’oeil presenting a dizzying vision of Paris and the Eiffel Tower. A work designed to celebrate the reopening of cultural venues from May 19, and exhibited on the Trocadéro esplanade for a month.

JR has also seized the Louvre twice. In 2016, he created on the surface of the pyramid a trompe-l’oeil reproduction of the facade of the Louvre in black and white, hiding the pyramid as if it no longer existed.

In March 2019, he had imagined an impressive trompe-l’oeil giving the impression that the structure emerges from a gigantic ditch. This installation, set up to mark the 30th anniversary of the Pyramid, covered the 15,000 square meters of the Cour Napoléon.

In 2018, the French street artist Le Module de Zeer covered with printed canvas seven columns of a gallery along the main courtyard of the Palais-Royal in Paris, where the famous Buren columns are installed. A work installed as part of an exhibition organized by the Ministry of Culture to highlight urban art, entitled “On the scale of the city”.

The work of the Module by Zeer, with its impressions of modules composing horizontal stripes, had been conceived as a “dialogue” with the columns with white and black vertical stripes by Daniel Buren. But the latter had sent a letter asking, in the name of moral rights, that the work be withdrawn because he had “not been warned” of its installation.

In July 2019, the Palais Brongniart was adorned with summer colors for the first edition of Street Packing, a street art project resulting from a collaboration between the city of Paris and the EPSAA (Professional School of graphic arts of the City of Paris).

Thus, fourteen columns and some of the panes of the west facade of the former Paris Bourse were covered with an ephemeral work imagined by a student, Léa Degez. On the program, ten meters high and thirty-five meters long with a fabric covering printed with circular patterns, creating an impressive trompe-l’oeil. The work, titled It goes round, was inspired by the gear mechanisms of La Bourse.

In June 2019, the duo of street artists Ella & Pitr, known for their monumental works on roofs, fields, facades, produced the largest fresco in Europe … in Paris, on the roof of the Parc des Expositions from the Porte de Versailles. A work of more than 2.5 hectares, which can be admired with a drone, or by going to the roof terrace of pavilion 7 of the Parc des Expositions at Porte de Versailles, very close to the ring road.

Eight days of work and several hundred liters of paint were needed to complete this work with a limited lifespan, like the building, which was to be destroyed in 2022.