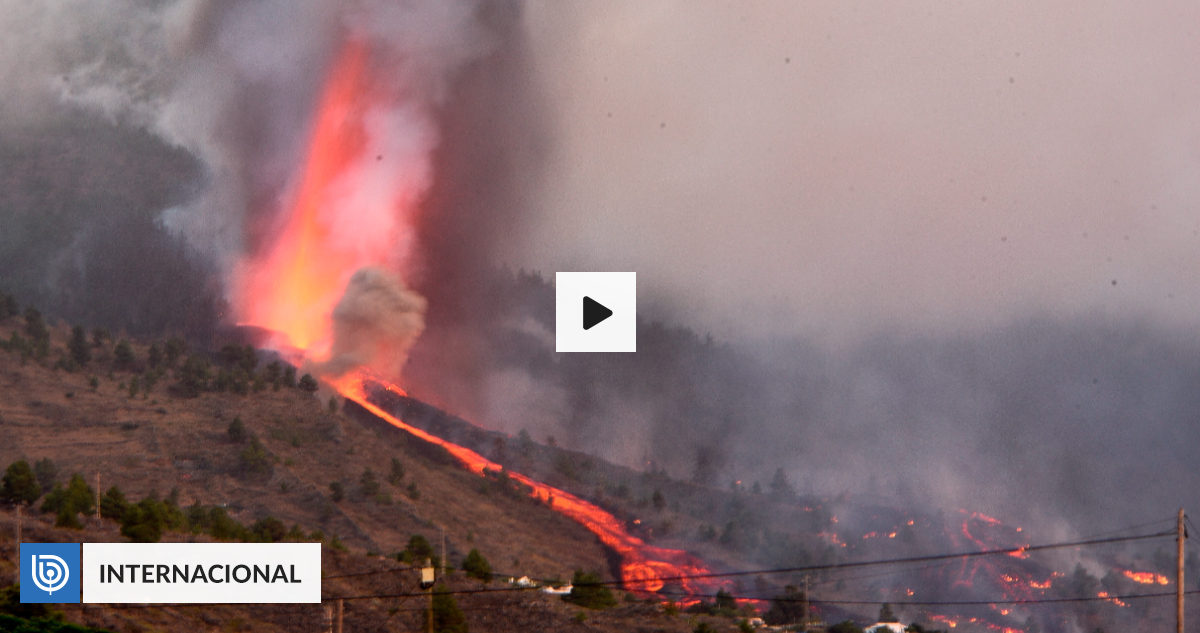 A lava flow from Cumbre Vieja “literally eats away homes, infrastructure, crops that it finds on its way to the coast of the Aridane valley,” explained the president of the local administration.

The situation in the area of ​​the Spanish island of La Palma of the Canary Islands affected by the eruption of the Cumbre Vieja volcano “It is devastating.”

“A lava flow with an average height of six meters it literally eats houses, infrastructures, crops that he finds on his way to the coast of the Aridane valley ”, explained the president of the Cabildo, Mariano Hernández Zapata.

According to the information, it is expected to enter the sea off the coast of Tazacorte, possibly at Playa Nueva, in Los Guirres. This island that is part of the Atlantic archipelago of the Canary Islands.

???? @avtorresp announces that around 5,000 people have been evacuated and no one else is expected to be displaced as lava flows out to sea#RashLaPalma

As the night had already advanced on Sunday, Hernández Zapata confirmed that there are no victims to mourn in this eruption.

He congratulated the scientific organizations present on the island, because they predicted the situation almost a week in advance and gave the authorities a probable starting point that was only far away. 300 meters from the place where the volcano finally erupted.

“Thanks to this previous work, dependents could be evacuated hours before the eruption. Throughout the day yesterday, Sunday, more than 5,000 people through the area where it is expected that the lava can advance ”, he remarked.

Hernández Zapata pointed out that, after being certain that “100% of the people are safe and there is no need to regret personal injury.”

Now they direct their concern to “damage to infrastructures and people’s life projects, which are their homes ”.

“We now have to be the administrations closer than ever to all the neighbors who have lost their homes in this catastrophe,” he concluded.

Meanwhile, the Military Emergency Unit (UME) has deployed on La Palma 67 members and 30 vehicles, a contingent that will increase throughout the morning until reaching 180 troops and 57 vehicles.

Meanwhile, three seaplanes are scheduled to arrive in the early afternoon.

The data was provided by the Minister of Defense, Margarita Robles, who stressed that all the necessary means will be available to deal with the volcanic eruption.

Thus, the possibility of sending some type of material and personnel specialized in gases is being analyzed if necessary and the Navy is prepared in case it was necessary to “make some kind of approach by sea,” Robles assured.

The minister explained that the barracks of El Fuerte was enabled, where more than 200 people with reduced mobility have already been welcomed. This, in addition to families with children, for which the canteen has had to be adapted into accommodation.

????The #Earth Army provides the Support Unit for the Projection of the act. ‘ El Fuerte ‘(5th SUIGE) in #LaPalma, to support the civil population evacuated from nearby towns, due to the eruption of the Cumbre Vieja volcano. @IGE_ET @MCANA_ET # SomostuEjército ???????? pic.twitter.com/PCBq0wk8RP

Robles pointed out that the UME was assigned to monitor the lava in a certain area.

Its function will be to help in the fires that are taking place, but also in eventual evacuations depending on the events.

“What is necessary, what is said and putting all the necessary means,” he insisted.

Robles pointed out that yesterday morning there was already a perception of what could happen and stressed that “things are working.”

The 7 eruptions that the island of La Palma had experienced until this Sunday were all concentrated around the Cumbre Vieja.

The longest of all that have been documented to date on the Isla Bonita is that of Tehuya, which occurred in 1586, which lasted 84 days, from May 19 to August 10.

The shortest, however, was the one that until yesterday was the last on the island and the penultimate in the Canary Islands: Teneguía, in 1971, which lasted 24 days, from October 26 to November 18.