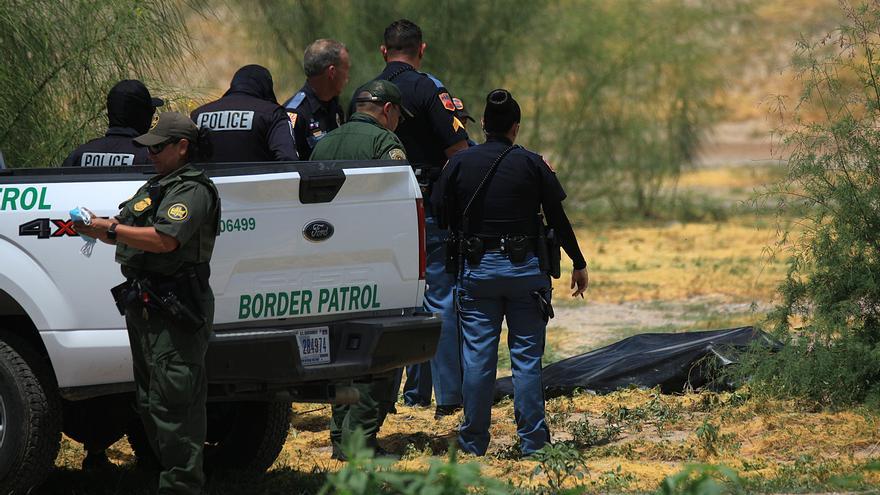 The border patrol next to the body.
Luis Torres

The Mexican authorities found this Monday the lifeless body of an allegedly migrant man on the Mexican side of the Rio Grande, which runs along the border between Mexico and the United States. Police elements and rescue bodies from the border areas of Ciudad Juárez (Chihuahua, Mexico) and El Paso (Texas, United States) went to the point on the banks of the river after noon before the alert of the border patrol, which located the body mouth down. Subsequently, a team of El Paso firefighters came down to the point and removed the lifeless body of the migrant in black bags, whose identity is still unknown as well as the cause of his death.

According to numbers from the United States Customs and Border Protection (CBP), in October of last year and until the end of May 2021 there were 203 migrant deaths along the border between the United States and Mexico. The Texas border sectors collectively register the highest number of deaths, with a total of 148. The Border Patrol, which is part of CBP, reported a total of 250 migrant deaths along the border with Mexico in last fiscal year 2020.

Migration increased in Mexico since October 2018, when caravans with thousands of migrants, mostly Central Americans, began to enter the country to reach the United States. In 2019, the image of a Salvadoran father and his one-year-old daughter drowned in the Rio Grande when they tried to cross to the United States went around the world.

With the arrival this year of Joe Biden to the presidency of the United States, the migratory flow from Central America to that country increased again in the expectation that he would lift the restrictions of his predecessor, Donald Trump. The crossing of undocumented immigrants does not stop growing and during this year, more than a million migrants have been arrested along the border.