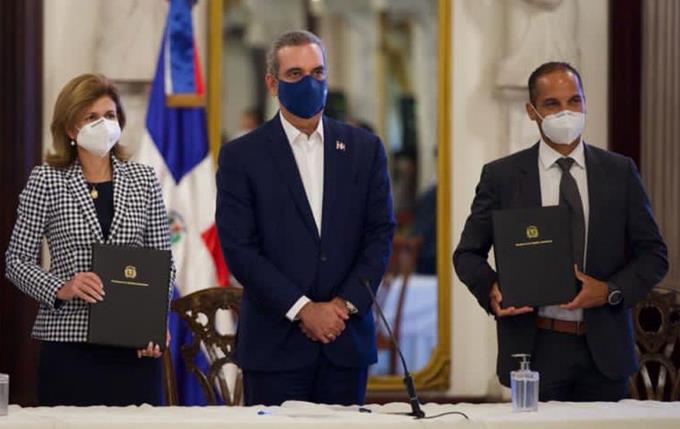 The government signed an advance purchase-sale agreement for the acquisition of 10 million vaccines against Covid-19, with the pharmaceutical company AstraZeneca, to apply them to five million people vulnerable to the disease.

The acquisition of the vaccines has a cost of 40 million dollars, of which the private sector contributed the first eight million.

It is the AZT1222 vaccine, which is developed by the University of Oxford and would be available in the first quarter of 2021.

“I am in a position to get vaccinated, but Covid-19 already gave me. I am already vaccinated, but I can tell you that the first thing I am going to vaccinate is my mother, ”said the president.

Abinader explained that the first payment for the vaccines will be made by the private sector, for an amount that amounts to 8 million dollars.

“We are talking about an investment of 10 million vaccines that will be purchased at four dollars each and that is why we are ensuring the cost. It is good that they know that there are 10 million vaccines, but only five million people will receive them, because it takes two applications, to ensure one hundred percent coverage, ”he clarified.

See Also:  US-Russia. Russian planes intercepted by Americans off the coast of Alaska

He assured that the Dominican Republic will be one of the first countries to receive the vaccine, which will help the government save thousands of lives.

He explained that for the application of the vaccine, the Ministry of Health has designed a logistics that is being perfected, so that from the moment it is received, the application process can begin.

For his part, Peña said that with the signing of this agreement, the country is positioned among those who ensure that its population will be treated as soon as the vaccine is available.

“This agreement is the result of the efforts of countless people and it is appropriate to highlight the willingness of a large part of the national business community, who have been allies in the fight against the pandemic,” he added.

Peña, who is also the coordinator of the Health Cabinet, reported that the final investment of what the Dominican State will pay is not yet available.

“The final investment is not available until the vaccine is approved, however we already have the commitment to make a first payment corresponding to eight million dollars, which is the great support we have received from the private sector,” he said. . He said that the country has signed agreements with other entities and is on the list of 17 pharmaceutical companies, to ensure that it is included in the first countries to receive the first doses of these vaccines.

While the representative of AstraZeneca, Rafael Mendoza, informed that as a result of the agreement, the vaccine will be supplied to the Dominican Republic at cost price, during the duration of the pandemic.

“Today we are pleased to share that the agreement concluded with the Dominican Republic will allow 10 million doses of the Covid-19 candidate vaccine to be available in the first three months of next year and subject to the approval of the National Congress, and of The clinical trials that are underway and the regulatory processes will be successful, ”he explained. He said ongoing clinical trials will determine the safety and immune response of the Covid-19 vaccine, in more than 50,000 participants globally, across a wide range of diverse groups and geographies.

“Phase two and three clinical trials are taking place in the United Kingdom, the United States and Brazil, while phase one and two are ongoing in South Africa, Japan, Kenya and Russia,” reported Rafael Mendoza, AstraZeneca representative for Central America and the Caribbean.

Mendoza said he was honored that the government of the Dominican Republic has chosen this vaccine for its vaccination plan against Covid-19.