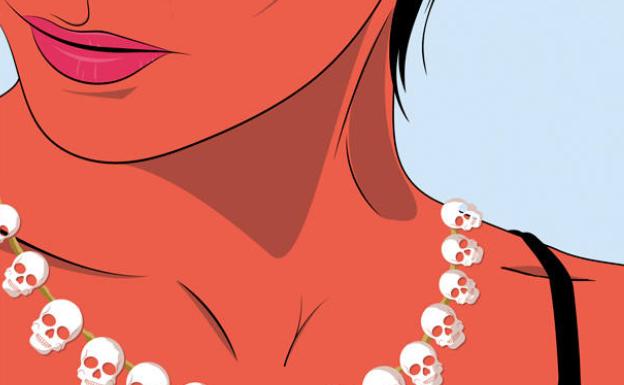 Roy Hazelwood, an FBI agent, said in 1998 that “serial killers don’t exist”. The journalist and writer Tori Telfer (Chicago, 1988) shows how wrong she was. That they also kill, and they do it in chain and with viciousness. Gather in ‘Damas killer’ (Impedimenta) a creepy gallery of lethal, non-fatal women. With notable doses of vitriol and black humor, he resurrects the stories of a fortnight of ‘masters’ of crime who, with their murderous deeds, made Thomas de Quincey’s wish to consider murder as one of the fine arts good.

They are brutal murderers, ruthless and sophisticated, capable of baking delicious cakes with ‘surprise’, of filleting their victims with surgical skill, accused of bathing in their blood to keep themselves beautiful, or of administering undetectable poisons to forensics. Daughters, mothers, grandmothers, wives, lovers … all are connected by their vileness.

To know what we are talking about, just type in a search engine names like Erzsébet Báthory, ‘the bloody countess’; Nannie Doss, ‘the laughing granny’; Lizzie Halliday, ‘the worst woman in the world’; Elizabeth Ridgeway, ‘the devilish saint’; Raya and Sakina, ‘the vipers’; Darya Nikolayevna Saltykova, ‘the Russian torturer’; Mary Ann Cotton, ‘the damn’; Tillie Klimek, ‘the priestess of the beards’; Alice Kyteler, ‘Kilkenny’s Sorceress’; Kate Bender, ‘the beautiful neck slicer’, or Marie Madeleine Marguerite d’Aubray marquise de Brinvilliers and ‘queen of the poisoners’.

Telfer notes as when talking about the most lethal serial criminals in history we think “always” of men with nicknames “like Jack the Ripper, the Butcher of Berlin or the Vampire Violator,” and how the annals of crime forget these ladies of death. Almost 150 serial killers censored by the most serious studies, in front of the thousand long killers. 10% of female serial criminals that Telfer puts under his microscope with an approach that renounces the most topical, recurring and easy explanations – “he did it for love”, “it’s a hormonal affair”, “an evil man forced him to to do it »- and the macho topics -« was a ‘femme fatale’ or a witch »-.

He opens the series with the sadistic Hungarian countess Erzsébet Báthory, who in the 16th century starred in one of the bloodiest episodes in criminal history. Descendant of Vlad Tepes, the Impaler, is blamed for 650 deaths. Obsessed with beauty, she inflicted on her maidens and servants the most terrible punishments and tortures, cutting off their fingers, burning them and forcing them to practice cannibalism. If he got tired, he forced other servants “to continue the task,” urging them to be more cruel to avoid being tortured.

The Russian Darya Nikolayevna Saltykova showed in the XVIII the same behavior. He killed at least 38 of his servants, who had no more rights than their horses and other domestic beasts, although he was accused of 140 murders. She was denounced and punished in an exemplary manner by Catherine the Great, but she avoided capital punishment, abolished in Russia at the time, and died imprisoned in a convent.

Also terrible was the Marquise de Brinvilliers, who shone in Paris in the second half of the 18th century. Intelligent, cultured and beautiful, married to an always absent aristocrat, she was desired and courted by dozens of lazy men. He turned many of them into his lovers, but when he got tired he used the poison with prodigality and efficiency. Also against his father and his brothers. He was beheaded and his body burned at the stake.

Mary Ann Cotton, a virtuoso of that “arsenic without compassion” that was distributed in the magnificent homonymous film by Frank Capra, was charged to three of her four husbands, and perhaps eleven of her thirteen children, with this lethal substance. In the mid-nineteenth century, forty years before Jack the Ripper, Cotton, marked a milestone in a poor and hungry England. He used his pregnancies to marry, the first time with 19 years, but with no intention of raising children. His victims seemed to die of typhus, a common epidemic in that unhealthy England and with symptoms similar to those of poisoning.

Already in the XX takes the witness Anna Marie Hahn, prone to use arsenic as a dressing. Judged for five murders, she was technically the first serial killer of the United States and the first executed in the electric chair, on December 7, 1938.

Dive Telfer in the lives of these and other murderers. It shows, more often than not, the social and cultural context of women with little chance of subsisting with dignity. It distances itself from the patriarchal prism that prevails each time the phenomenon of the murderous ladies is approached, and the topics that present women as angelic, selfless and submissive creatures as well as beautiful ones. Telfer argues that both the stereotype of female weakness and the tendency to associate passion and lust with “beautiful” killers and witchcraft with “ugly” explain why the shadows loom over the wanderings of serial killers.

«Women are only considered capable of committing impulsive expressive homicides –The murder as a result of an action in self-defense, an outburst of rage, a hormonal disorder, an attack of hysteria–, not to carry out instrumental-cognitive homicides, which are premeditated, planned and executed in cold blood », Writes Telfer in the prologue.

‘Killer ladies’ is Telfer’s first book, test reader, academic editor and journalist who had published her articles in media such as ‘The Believer’, ‘Vice’, and in the digital versions of ‘Rolling Stone’ and ‘The Atlantic’.