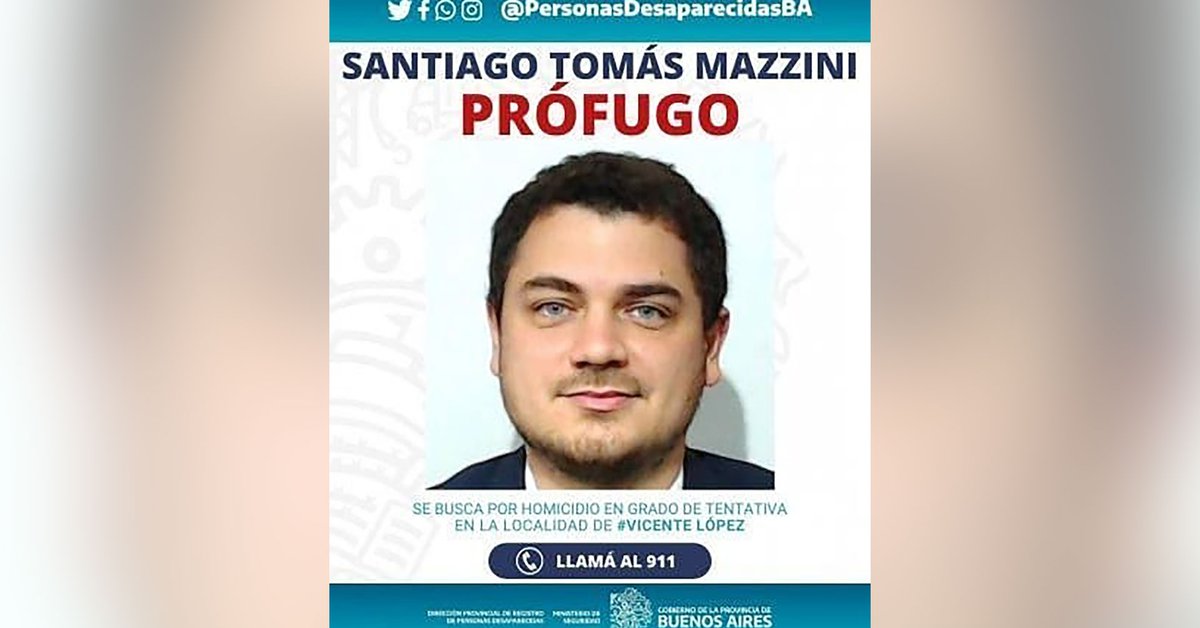 Justice cannot find Santiago Mazzini. The 37-year-old lawyer who, after a traffic argument, ran over and killed the Aerolineas Argentinas pilot Julián Giménez in Vicente López has been on the run for 70 days. And now offer a succulent reward for whoever delivers it.

Despite the different investigative measures that were deployed, Mazzini’s whereabouts remains a mystery. Given this, the Ministry of Security of the Province of Buenos Aires published a reward of up to four million pesos for those who provide data that allow their capture.

Mazzini is wanted for the attack on August 4. It was 4.30pm and the lawyer He drove his black Jeep brand truck 2020 model, at the intersection of San Martín avenue with Ayacucho when a traffic discussion began with Giménez (29), who a few months ago had been received as a commercial pilot.

The pilot I drove a low-displacement motorcycle. While there are no corroborating witnesses to the reason for the traffic discussion, Township security cameras show they exchanged screams for several blocks and that there could even be some kind of friction between them.

The outcome occurred seconds later when both crossed the tracks of the Florida Miter train station. As can be seen in the videos, which were key to Justice, Giménez hit the left rear view mirror of the truck with his hand and, immediately, Mazzini pinned him against the sidewalk and ran him over. Both the motorcycle and its driver were trapped under the wheels of the Jeep.

A woman passing through the area called SAME. The pilot was admitted to the Vicente López hospital and later referred to the Olivos Clinic. He agonized for 20 days but, after several operations, he died of the injuries.

In those first days of August, while Giménez was fighting for his life, the lawyer Mazzini went underground. When the prosecutor Martín Gómez classified the case, at that time, as an attempted murder, and they went to look for him at his home in Vicente López, the accused was gone. In his apartment, officers found his wife pregnant.

On August 24, when the young pilot died, the cause changed his rating to simple homicide, which provides a penalty of 8 to 25 years in prison. The fugitive’s lawyer, Diego Szpigiel, assures that, for the moment, Mazzini will not turn himself in.

In article N ° 1 of the resolution in which the Buenos Aires government’s money offer is made official, the authorities set the amounts to be delivered in the event that someone provides accurate information about the lawyer: “Offer a public reward, between the sums of two million pesos ($ 2,000,000) and four million pesos ($ 4,000,000) for those who provide reliable data that allow locating the fugitive Mazzini ”.

Official Gazette: the reward of the Ministry of Security

Also, it is clarified that “the people who wish to provide the aforementioned information, may do so with reservation of identity, appearing before the General Prosecutors of the Chamber of the different Judicial Departments of the Province, having to ensure the confidentiality of the information and the reservation of the identity of the people ”.

As confirmed by sources with access to the file, It is not ruled out that Mazzini has left the country. Researchers affirm that there is no camera that has taken it, although in this type of search secrecy is key to finding the fugitive.

Meanwhile, the defense of the fugitive lawyer appealed the refusal to exempt from prison and, on this point, in the next few days the Buenos Aires Chamber of Cassation will have to resolve.

Trout entries in National Team matches tripled: how to differentiate fake from original
Femicide in El Talar: the result of the autopsy was known
Mavys Álvarez case: what happens in Justice with the complaint to Maradona’s environment