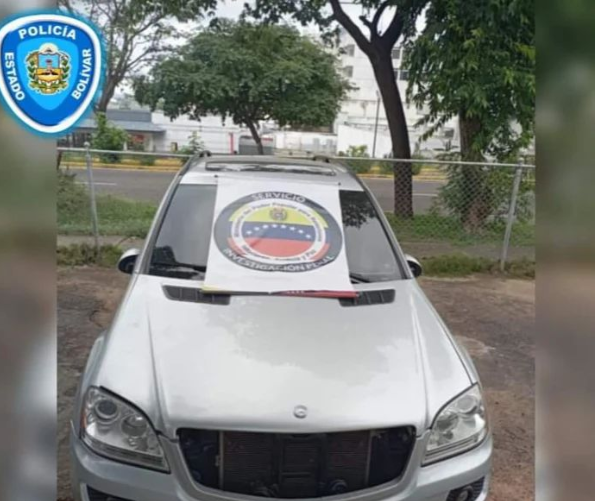 Security deployments have been activated to counter these thefts in the entity.

Three stolen vehicles were recovered in different procedures carried out by military personnel, in Puerto Ordaz and Ciudad Bolívar.

The first case was dealt with by the Criminal Investigation Service (SIP). The owner of a Mercedes Benz car reported that it had been stolen.

The DIP commission found the vehicle on the public highway, adjacent to a workshop located in the Unare parish of the Caroní municipality.

The characteristics given by the citizen describe that it is a 2006 ML350 model, beige in color and AF051OG plates.

Until now, investigations to find the whereabouts of the person responsible for the event are still ongoing.

Another find on Paseo Caroní

Officials from the Criminal Investigation Directorate (DIP) located and recovered another car on Paseo Caroní avenue in Puerto Ordaz.

It was a blue Toyota brand vehicle, Corolla model of the year 2001.

This procedure was notified to the Public Ministry; and -according to what was reported by the institution- an investigation was launched for the crime of misappropriation.

In the Historic Center of Ciudad Bolívar – Angostura del Orinoco municipality – they also found another car in a state of abandonment. It was a red Jeep, with AAI178 license plates.

A commission attached to the Criminal Investigation Service (SIP) of the Police of the Angostura del Orinoco Municipality (Pmao), verified said vehicle in the Police Investigation and Information System (Siipol), which found that it was requested for theft. He was transferred to the police headquarters and there they notified the case to the Public Ministry.

For their part, the authorities have activated security deployments to counteract these robberies in the entity.

The spice level of your dishes reveals your personality

7 losses in Tseung Kwan O on the 7th caused Junying Sanfang to lose 2.71 million in 3 years