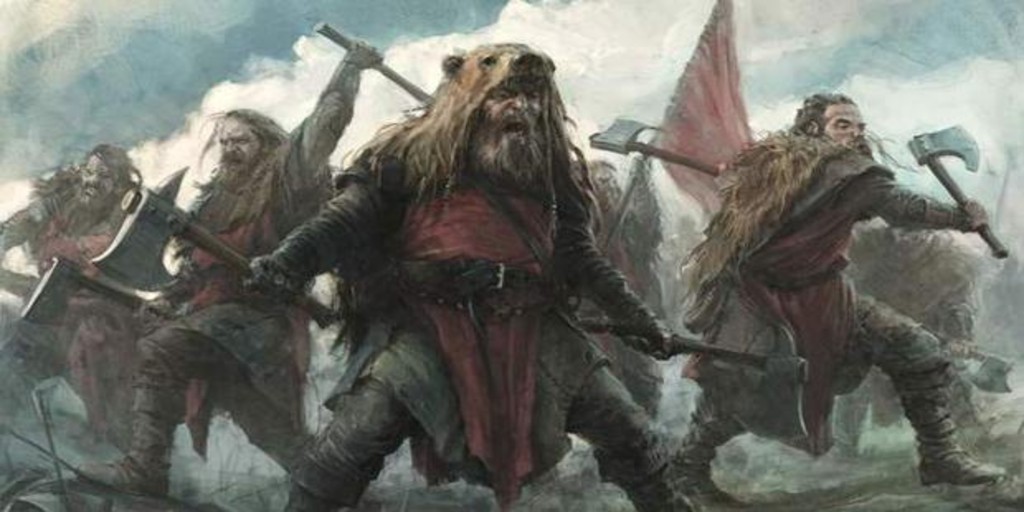 The sagas, a mixture of history and Norse mythology, describe Berseker with special ferocity. They affirm, with devotion, that they were “those whom iron cannot harm.” Elite Viking warriors (“almost a personal guard,” according to renowned researcher Manuel Velasco Laguna in “Brief History of the Vikings”) who fought in a trance state and demonstrated extreme ferocity against the enemy. To such an extent they ignored the fear of being pierced by a sword that went to battle without armor and, alienated by anger, they bit their shields as a sort of ritual prior to the dance of steels. If the brutality lacking in finesse and fencing that they displayed on the battlefield can be called this way.

How did they get to that trance? Until now, the investigations affirmed that they did it by ingesting an elaborated concoction based on «Amanita muscaria», a fungus also known as «fly swatter» or «false grapefruit» and that, besides being able to produce intestinal damage and even death, beneficial side effects for combat. “The clinic begins between 20 and 180 minutes after consumption, with a gastrointestinal picture, in addition to dizziness, dizziness, ataxia and incoordination, seizures, euphoria, behavioral disturbances, visual disturbances and hallucinations,” explain a compendium of experts on Pharmacology and botany in the dossier «Emerging drugs: hallucinogenic plants and fungi».

However, a new study prepared by the doctoral student Karsten Fatur (ethnobotanist of the pharmacy faculty of the University of Ljubljana) has questioned the theory of “Amanita muscaria” and has affirmed that there is another plant whose side effects are much adjusted more to the symptoms that the berserkers would have shown in battle: the “Hyoscyamus niger” or black beleño. Their conclusions, which had already been exposed in an article published last November under the title “Sagas of the Solanaceae: Speculative ethnobotanical perspectives on the Norse berserkers”, have just jumped to the present after the newspaper “The Times” I interviewed him.

The victory of this researcher has been to contrast the two possibilities. And, the theory that the black beleño was used by the berserker had already been wielded by other authors. An example of this is that it is succinctly collected in the informative dossier «Viking fury, hemp and muscaria amanita», prepared by Mónica Hinojosa and Isidro Marín-Gutiérrez. «The Vikings used to drink beer with black beleño, an integral plant of the Solanaceae family. This produces a feeling of great lightness, it seems that one loses weight and feels so weightless that he ends up believing that it rises through the air, ”he explains.

Berserker Fury
Velasco Laguna defines the berserker as a type of force that “could almost be considered the personal guard” of kings and jarls. In practice, they were troops fighting with extreme ferocity without worrying about their integrity. For the rest, it seemed they were not afraid of death or the enemy’s ability. They stood out and were recognizable in the middle of the battlefield because they fought without armor (sometimes they came undressed from the waist up) and barely wore some skins. “At the time of an attack they occupied the front row and were the nucleus through which an army was built,” say the authors of “Viking fury, hemp and amanita muscaria.”

Thanks to different archaeological finds (among them, some chess figures of the twelfth century in which they are represented with large teeth) it is known that they bit their shields out of pure anger before the contest. A fury that came from the trance state they entered (“berserkergang”) pending the confrontation. «They threw themselves into combat with blind fury. It has been testified that they were thrown into the water early from a drakkar and drowned, ”added the authors of the aforementioned dossier.

Apparently, they caused fright to friends and enemies since, in the middle of the confrontation and due to their strange state, they did not discriminate when handing out axes and slashes to anyone who stood in their way.

The Spanish author defines them as religious fanatics and faithful devotees of Odin, the god of war. The legends that were narrated about them were countless. The most famous is the one that indicated that they obtained their power from this same deity. “It was said that when Odin galloped on his horse, a red foam fell from his mouth, which when he reached the ground became a fungus,” he explains. Others claimed that they had the ability to change their appearance and transform into wild animals.

In the chronicles, the berserkers fight, usually, alone or – as much – in small groups. Although it is true that in some sagas such as Egil Skallagrímson, twelve of them are spoken by the king. However, the most famous of these warriors was the one who fought in the battle of Stamford Bridge. In it, and always according to tradition, one only defended for hours a bridge of the troops of the Anglo-Saxon monarch Harold. He ended up with nothing less than a quarantine of enemies until he was shot down. And they did not get it in a singular confrontation, but thanks to a spear from the water.

One of the most famous legends about the berserker, which explained that they became werewolves, caused them to be repudiated after the arrival of Christianity even though, during the Viking era, they were part of the elite of society. Gradually, they began to be considered crazy and outlawed. In 1015, for example, jarl Eirikr Hákonarson from Norway declared them outlawed, something that was replicated, a century later, in Icelandic law. By the twelfth they had already disappeared from public life.

The madness plant
As Fatur explains in his research, the version of the “Amanita muscaria” was recorded more than a century ago and, since then, it has become widespread despite the fact that “its effects do not completely coincide” with those suffered by these warriors. In his words, black beleño, used since the Middle Ages in analgesic concoctions and traditionally associated with witches, has tropic alkaloids (a compound also found in cocaine) such as scopolamine, hiosciamine and atropine. All of them, substances that reduce pain and treasure hypnotic and spasmodic abilities.

“I intend to underline the problems with the original theory and offer an alternative intoxicant that fits much better with berserker behavior reports,” he says.

As he has revealed the doctoral student to the newspaper “The Times”, the black beleño “would have reduced the feeling of pain” of these fighters and “would have made them wild, unpredictable and very aggressive.” In turn, the rest of its side effects (“dissociation and loss of contact with reality”) could have caused them to launch against the enemy without fear of death. Finally, he considers that it would be a plausible explanation for other symptoms described in the chronicles such as hyperactivity or the tendency to undress in the heat of battle.

Contrary to the “Amanita muscaria” theory, Fatur explained that, “although it is true that this fungus can produce anger and hyperactivity, these symptoms are exceptional and unusual.” On the other hand, he has also indicated in his dossier that “rabies is not a common symptom that occurs in cases of consumption of muscaria, but prevails in cases of tropane alkaloids.” And this effect is, in his words, one of the most recurring in the sagas.

Differences and similarities
However, it also specifies that the two substances have similarities. «As discussed above, both can cause increased strength, an altered level of consciousness, wild / delusional behavior, the appearance of shaking / interruptions and redness of the face. All this has been associated with the berserker. But the beleño also has analgesic effects not seen in muscaria compounds, which may explain his alleged invulnerability, ”he says.

Fatur points out that some authors have observed that the intoxication of both species can produce “a significant drop in tension, so that if they are injured, they would bleed much less.” In his words, that may be the basis of the belief that berserkers were not damaged by swords. However, it also sentences that, if these effects occur, they would be too weak to fight.

On the other hand, Fatur has also claimed that the berserkers would take black belander in an “tea infusion” or with alcohol. At this point there is no novelty since there have been many investigations that have influenced ingesting the “Amanita muscaria” in the same way. An example is the dossier “The Viking Fury”, which states that “the hats of these mushrooms were allowed to dry and then crushed to make a hot drink” or “mix them with some alcoholic beverage, probably mead.” To be more specific, they cooked the fungus in this last liquid since “it acted as a catalyst facilitating absorption by the body.”

However, Fatur is cautious in his conclusions and avoids stating that black belander was the substance that the berserker ingested before the contest. “Although it is much more likely because of its anticholinergic tropane alkaloids and its profile of symptoms, there is not enough archaeological and historical evidence to prove or disprove this theory. But it does provide a new explanation that, in addition, is much more viable to understand its trance, ”he reveals in his dossier.

Among the dozens of theories that try to explain the cause of his combative fervor is the one that states that they consumed bread and beer contaminated by the ergot of rye (with a high content of lysergic acid, a precursor of LSD). Another of them speaks of the use of belladonna. .