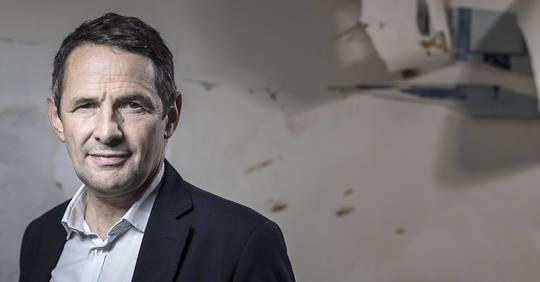 Thierry Mandon has already had several lives. He was a business manager, mayor of Ris-Orangis, in Essonne, deputy, minister, director of the publication ofEbdo, and now director of the Cité du design in Saint-Étienne. Jumping from one discipline to another, mixing them together, looking at them in a new light, all of this obviously pleases him. At 62, Manuel Valls’ former Secretary of State for State Reform and Simplification is now trying to combine design and politics. His goal, which he has been pursuing for several years (in 2014, he co-chaired the Business Simplification Council with Guillaume Poitrinal): thanks to design techniques, he wants to make public policies, and politics itself, more humble. , for more efficiency. Hard fight …

Le Point: What does design have to do with politics?

Thierry Mandon: One of the three missions of the Cité du design de Saint-Étienne, in addition to education and the organization of a biennial, is to help public and private actors to innovate through design. If the application of design methods to companies has proved its worth, design applied to public action is more recent. The principle is to reverse the fabric of organizations or policies, starting not from management requirements, but from usage and users. Let me take an example: how to welcome a population into social services? So we set up for three days in a town hall and we observe how people arrive, the way they get information, find their way, what they ask, etc. Then, we collect ideas, with them, then we test how the decision can evolve. Solutions are then prescribed. The design of public policies was implemented in Denmark in the 2000s with MindLab, a laboratory created by the government of the day. Since then, these practices have mainly been applied in Anglo-Saxon countries. Los Angeles police were thus reorganized from these precepts. They were introduced in France within the State by Etalab.

How is this new compared to usual practices?

It is a cultural break with the way of building public policies. In our country, the decision makers, whether they are senior officials or politicians, are brilliant people, knowing, omniscient… They decide, and it is necessarily perfect because they are the ones who decided. The system is in question: at the ENA, you are welcomed by telling you that you are the brightest and the bearers of the country’s future. In essence, you are irreproachable, so you are not inclined to doubt, to humility and to listen, virtues essential to design practices.

Read also Damon – Reinforcing the ENA, what a great idea!

The problem, no doubt, is that this questioning must be decided by those who do not have much interest in changing habits …

Culturally, in France, there are of course obstacles to overcome. Decision makers must listen before deciding. They also need to understand that what they decide isn’t necessarily right or perfect the first time. They have to recognize the right to make mistakes, which is tricky. It is the whole ethic of the making of public policies that must evolve. It is a question of enriching the public decision of the contribution of experts and expertises of uses. There is also a problem of rhythm in France, in particular in Parliament. For each problem, we decide on a law. All the preparatory part, however essential, is sold off. The normative frenzy is the symptom of a political and institutional submission to vertigo and urgency.

Are all politicians suffering from the same evil?

No. I notice a dichotomy between local and national elected representatives. The first understood that it was necessary to involve people in reflection and decision-making. They know the importance of consulting before deciding. The local elected officials have also integrated the idea that their decisions could be called into question if they do not work properly.

And the national elected representatives?

At the national level, on the other hand, the atrophy of the role of Parliament accentuates the acceleration effects. It should be the place of the preparation of laws, but the mode of operation of the Ve Republic sweeps away this utility. Those are the President of the Republic then the government who decide, which make the laws, without any impact study, or a vague botched work at night in twenty-four hours at Bercy. I observed this manufacturing defect when I was in government. And, once the law is passed, as long as it is applicable, we stick to it, even if it does not work.

How does what you call the “manufacturing flaw” manifest itself?

We had an example of the absurdity of the decision-making process at the end of October, in the Senate. In the middle of the night, by means of an amendment, a senator, with the support of the government, suppressed the accreditation process for university professors and lecturers. This mechanism, entrusted to the National Council of Universities, had existed since 1870! Of course, there was no prior impact study. This example is the quintessence of the lack of consultation and is moreover perfectly unconstitutional.

Article 24 of the Comprehensive Security Law (which sanctions the “malicious” dissemination of the image of the police officers, Editor’s note) is indicative of the same lack of preparation. The government quickly writes an article, then recoils from the general protest. A little consultation would have been enough to avoid this mess.

In addition to the principles of design, which assess the problems and provide solutions, what can be the remedies?

Haste and arrogance make a hell of a couple. It explains a good part of the dysfunctions of public policies. It is absolutely necessary to invent a factory different from the laws. We could also set up an assessment of a text: after two years, for example, we study how it is applied, what are its results, and we correct if necessary. We could also institute a legislative orientation debate, a few months before the bill is tabled, during which the government would present and debate its legislative intentions. This would simply reform the institutional mechanism. The new Planning Commission should take up this subject, think about how to rebuild public power and how to manufacture policies that combine, and therefore more effective, and thus rebuild a base of confidence in public decision-making.

Is it an observation of failure that you have assumed, since you were Secretary of State for State Reform and Simplification?

First, I applied these methods and I started to simplify it by dissecting certain policies to reform them. The social declarations of companies have, for example, been simplified, which has saved the French economy billions of euros. I have also tried to reform the practices of the State, but we must be aware of the blockages and the need to make these transformations over time. Marc Guillaume, secretary general of the government at the time, told me one day: “It is very good, the simplification of the State, but it disrupts too much the functioning of the services. ”