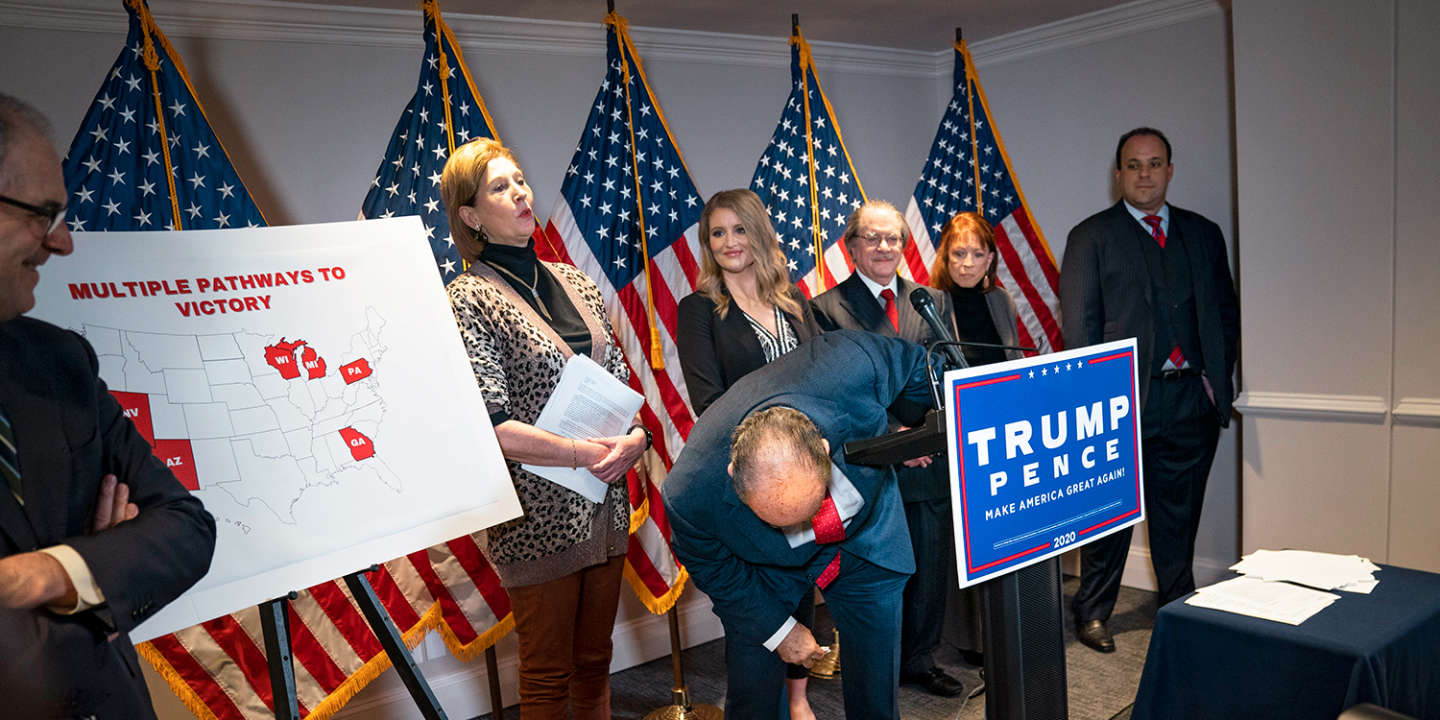 On November 7, Donald Trump’s lawyers made an appointment with the media. But instead of ending up at the Four Seasons hotel, which they thought they had booked, they landed in the parking lot of a landscaping company in the suburbs of Philadelphia called Four Seasons Total Landscaping… On November 19, they handed it over. to the Republican Party campaign committee in Washington. Even with no mistake about the location, this conference was not lacking in fun either. At this moment, Rudolph Giuliani, Trump’s chief lawyer, pretends to look for the FBI: ” Where are they ? Where are they ? “. In a parking lot, maybe …

If the curious position of Me Giuliani offers us a clear view of an implacable baldness, it is indeed his hair that made ink flow at the end of this conference. That day, the former New York mayor sweated so much that her brown dye eventually trickled down her face, giving hairdressers-colorists a big debate: Was her color too fresh? Hadn’t she been rinsed out enough? Or had he applied a specific – and inexpensive – coloring product to his temples, which were lighter than the rest of the hair? At this point, this last hypothesis appeals to us.

Read also How the appeals of Donald Trump, who still disputes the election results, are rejected or abandoned

There is in this photo a pair of red heels, three red ties and six states colored in red. The perfect opportunity to remind people that the color of the American Republican Party has varied for a long time, passing indifferently, over the course of the elections, and according to the inspiration of the media, from blue to red, then from red to yellow… It’s only on the occasion of the presidential election of the year 2000, won by George W. Bush, which the American media finally agreed to symbolize, durably this time, the Democratic Party by blue and the Republican Party by the Red.

Are your eye naturally drawn to Giuliani’s number? Be careful not to miss lawyer Sidney Powell, though. First, because it is so focused on conspiracy theories that even Donald Trump ended up firing her, in the wake of this conference. Then, and above all, because Madame here allows us to remind us that the leopard is the most eternal fashion trend there is. It was Princess Nefertiabet, daughter of Cheops, who launched it, in the middle of ancient Egypt, by being buried in a magnificent asymmetrical dress in leopard skin …

If we are still looking for an explanation for the presence of this phone at the feet of Rudolph Giuliani, we can provide you with firm and reliable information about it. By zooming in the image, we noticed the presence on his screen of a drawing of a red elephant. Since the American cartoonist Thomas Nast thus represented the Republican Party in an 1874 press cartoon, the animal has been the unofficial symbol of the party… But, no, we will not stoop to making a joke on Donald Trompe.