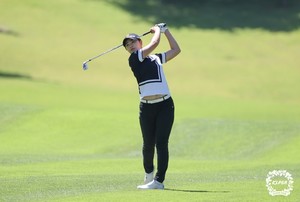 Lee Ga-young took another chance to win the KLPGA Tour by taking the lead in the second round of the Se-ri Pak Invitational (total prize money of 800 million won), two strokes ahead of the second place on the KLPGA Tour.

Ga-young Lee has won the championship several times in the past, but on the last day, she showed a lack of support and secretly swallowed tears, so winning this tournament is more urgent than anyone else.

In the second round held at Sejong Silk River Country Club (par 72) in Cheongju-si, Chungcheongbuk-do on the 18th, Lee Ga-young tied 6 birdies and 1 bogey to 5 under par 67 (middle total 11 under par 133), 2 strokes with Hyo-joo Kim and Hana Jang, tied for second place. got ahead

Gayoung Lee, who has played on the KLPGA Tour since 2019, has had several wins this year, but missed the first win by allowing a comeback every time. However, it has been on a steady upward trend by entering the top 5 four times, including runners-up at McCall and Mona Park Open.

Immediately after the match, Lee Ga-young said, “I didn’t always try to do well in the final round, so I slipped. Tomorrow, I’ll play with the thought that ‘I have to put it in’ differently from before.” I will reduce the score,” he said.

Kim Hyo-joo, who cut five strokes by recording an eagle on the par 5 5th hole, raised expectations for her 13th victory on the tour.

Jang Hana, aiming for the top spot in the grand prize points, tied 6 birdies and 2 bogeys to reduce 4 strokes and tied for 2nd place with Kim Hyo-joo.

Hana Jang, who is currently recording 503 points, will receive 60 points if she wins the season for the third time in this competition, beating Park Min-ji (23, 503 points) and taking the lead in points.

On the other hand, Yewon Lee, who appeared as a recommended player and took the lead in the first round alone and predicted a ‘blast’, lost one shot on the day and stayed in the joint 10th with a 7-under-par 137 in the middle.

On the other hand, Yoon Na and amateur Hwang Yu-min, who play on the KLPGA second tour, the Dream Tour, drew attention as they tied for 4th with a mid-total 8-under par 136.