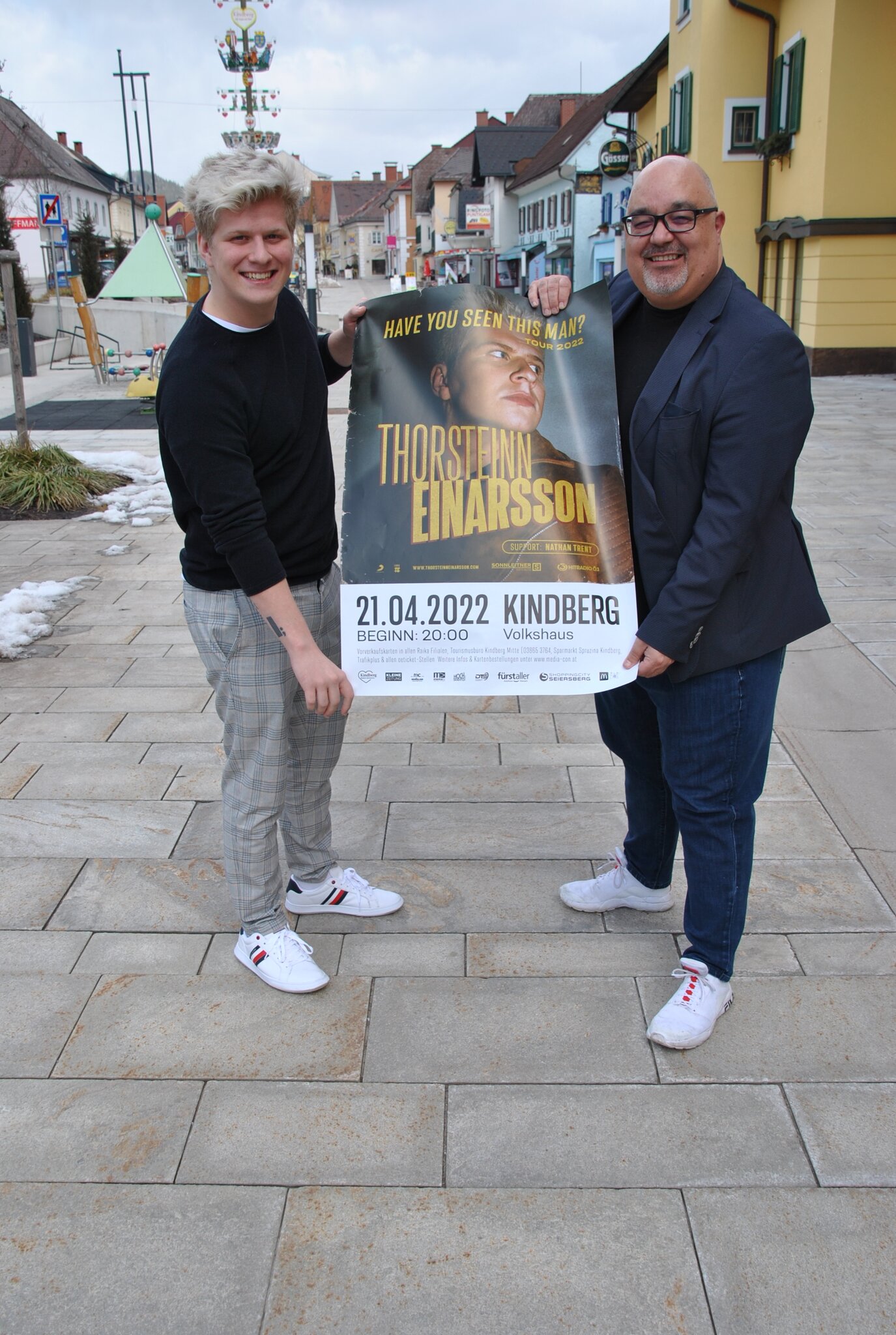 Not only the concert planned in Kindberg by Thorsteinn Einarsson was postponed twice due to Corona, so the press date also had to be rescheduled twice.
On Shrove Monday the time had finally come and fortunately it wasn’t a carnival joke. The 24-year-old Icelander, fully recovered and in good spirits, was with the organizer Wolfgang Koinig (media.con) for his “Have You Seen This Man?” tour in the Mürztal-Unterwegs and answered questions from the regional press in the heart of Kindberg in Café Krikac.

Support at the concert

Thorsteinn told that his colleague and good friend Nathan Trentwho represented Austria at the European Song Contest in 2017 and is currently a juror on “The Masked Singer”, will accompany him on the tour and appear as support or special guest with a large repertoire of hits.
Thorsteinn Einarsson will play one of 11 Austria concerts in Kindberg on April 21st. Even if playback or even partial playback is unimaginable for the young artist, the hits will be performed as you know them. “Of course it’s nice to be on the radio or to play in the studio, but to see the faces when you play a song and feel that they are the favorites, that’s incomparable,” he says with shining eyes.

Einarsson was killed in 2014 at the age of 18 due to his participation in the talent show “The big chance”, where he took 4th place, and immediately conquered with his own number “Leya“ the top 10 of the Austrian charts. In 2015 he received the Amadeus as best songwriter. Sold out concerts, a tour with the Sons of Mannheim – to name just a few – followed. After the second album, it suddenly became quiet about the exceptional talent. In 2021, however, he reported with his new number “Shakels‘ returned not only with a powerful voice but also with the ‘admission’ that it took the time to cope with panic attacks and depression.

authenticity in the texts

In an interview, Einarsson says when asked whether he packs experiences into song lyrics: “Always! It might be wrapped in metaphor, but there’s always truth in every song!” Shakels is about mental health and breaking free from bondage.

Einarsson also keeps writing songs for other artists. “When I write for others, I don’t have to tell this very personal story.” Although Thorsteinn Einarsson has a family background towards opera (note: Einarsson’s father is an opera singer), he does not get very much into “when two people sing in Italian in a very high register”. “Shakels, for example, has vibes like Clint Eastwood is on pop, but I will never be found in either country or pop music, even if you do it for money every now and then,” laughs Thorsteinn and leaves it there is no doubt that he will remain true to the pop genre.

Looking back, Einarsson would give his 18-year-old self signing up for the Big Opportunity a high five and tell him he’s going to do just fine. “He will make his mistakes but learn from them. Today I can say that I just want to make my music and DGC was the start and the way to my first record deal, so I would do everything the same way again – because my music should reach and touch people,” says Einarsson.

Next steps on the career ladder

When asked whether Einarsson in the next season of Starmania als Juror After a mischievous grin and an “I don’t know what you’re talking about…”, he makes people sit up and take notice with “officially we don’t know anything before March 8th, after March 8th that could be right”.
Am March 25 appears the next number “Runaway‘ to look forward to.

There are still tickets left for the concert in Kindberg, which are available in all Raika branches, Trafikplus and all oeticket offices.

The good results of the smartphone market in 2021

“I think I pulled his tongue out at the last second”