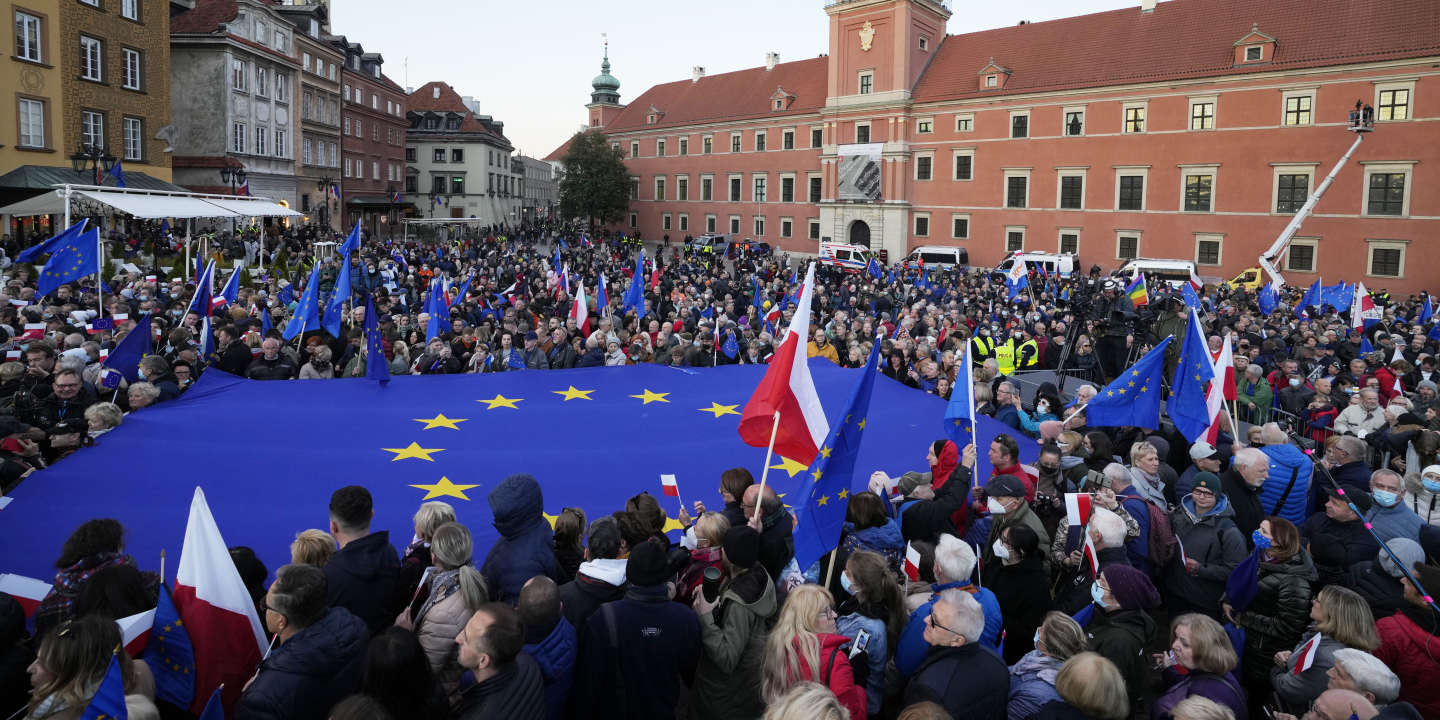 They took to the streets in numbers. Tens of thousands of Poles demonstrated on Sunday 10 October to defend their country’s membership of the European Union (EU) after the decision, Friday, of the Polish Constitutional Court challenging the primacy of European law over national law.

This decision could mark a first step towards Poland’s exit from the EU. It is against this idea that the Poles came to demonstrate on Sunday, at the call of the leader of the opposition and former President of the European Council, Donald Tusk. He had called on his compatriots to parade for “Defend a European Poland”. “We have to save Poland, no one will do it for us”, he added on Twitter.

“Tens of thousands of people in Warsaw and in more than a hundred towns and villages in Poland came to protest against what this government is doing to our homeland”, he said Sunday to a huge crowd waving European blue flags in Warsaw.

“I am here because I fear that we are leaving the EU. It’s very important, especially for my granddaughter ”said Elzbieta Morawska, 64, who marched in the capital. “The UK has just left the EU, and it’s a tragedy. If Poland leaves now, it will also be a tragedy ”, estimated 20-year-old Aleksander Winiarski, who studies in England and is also demonstrating in Warsaw.

Tensions between Brussels and Warsaw

Poland and other Central and Eastern European countries joined the European Union in 2004, fifteen years after Lech Walesa’s trade union movement helped topple the Communist regime. Membership of the Union remains very popular, according to the polls, but relations between Warsaw and Brussels have become significantly strained since the populist Law and Justice (PiS) came to power in 2015.

The tensions relate in particular to the reforms of the judicial system wanted by the government, and which the EU considers are likely to undermine the independence of the judiciary and risk leading to a reduction in democratic freedoms.

In addition to its ruling on Friday, according to which several articles of the European treaties are “Incompatible” with the country’s Constitution, the Polish Constitutional Court, largely in favor of the current power, also asked the European institutions not to “Act beyond their skills” by interfering in the reforms of the Polish judicial system.

Read also the editorial: Poland: what joining the EU means

Brussels immediately reacted, through the voice of the President of the European Commission, Ursula von der Leyen: “Our treaties are very clear. All decisions of the Court of Justice of the EU are binding on all authorities in member states, including national courts. EU law takes precedence over national law, including constitutional provisions ”, she said, specifying that “This is what all EU member states have signed up to”.

Before the judgment was handed down, the EU had warned that the case could have ” consequences “ for the payment to Poland of European recovery funds in the context of the Covid-19 crisis.