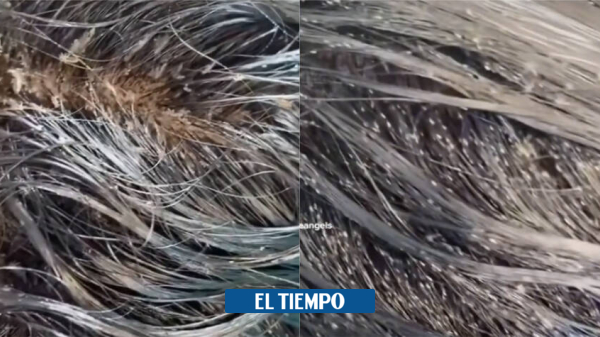 An impressive video of a case of infection with lice has gone viral on social media, specifically on TikTok.

The case occurred in Texas, United States, and was shared by ‘The Lice Angels’, a clinic specializing in the treatment of lice.

In the shocking video, the clinic shows the girl’s head in the foreground while her hair is brushed in order to assess the infection.

Thousands of lice can be seen crawling through your hair. In fact, there is not a single space in your hair that is free of these insects.

According to ‘The Lice Angels’, the minor had more than 15,000 lice in her hair, so she had to go to a clinic located in the city of Corpus Christi, in Texas, to receive special treatment.

“Millions of lice in children’s hair,” says the description of the video, which already has more than 73,000 views.

According to several international media, the minor’s parents only sought treatment when the lice began to show superficially in the girl’s hair, which would have allowed the situation to progress in such a way.

This is the video that has gone viral. Images can be strong for some people.

(Read also: The sad end of ‘Real life Tarzan’ after rescue without his will).

According to the Centers for Disease Control and Prevention (CDC), lice are spread by direct hair-to-hair contact.

Recommendations for preventing head lice infections include avoiding head-to-head contact between children and not sharing clothing such as hats. Also, don’t share combs, brushes, or towels.

It is also recommended to keep children’s hair clean and to do a constant check of their hair after they share with other children.

(You may be interested in: American influencer Gabby Petito was strangled to death)

However, the CDC clarifies that lice are not a threat to public health, but they do need to be treated in time.

“There are no known cases of disease transmission by these lice, although they can be annoying because they cause itching and prevent sleep. Sometimes the itch can make the person scratch too much, making a secondary skin infection more likely, ”they say on their website.

Diana Célis, Epa Colombia’s girlfriend, blocked her for the kiss with Lina Tejeiro

ALS patient on Martha Sepúlveda: ‘the most sacred gift is life’

Betty, the ugly: former president would have met with the cast to see the end