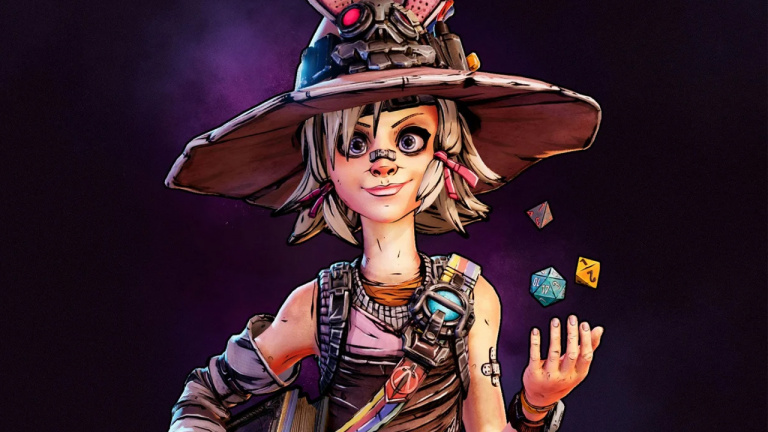 Gearbox Software is dusting off one of its cult franchises in the spring of 2022. Tiny Tina’s Wonderlands forsakes for a time punk-apocalyptic in favor of heroic-fantasy. Does this Borderlands spin-off live up to the legend of the Vault Hunters?

Tiny Tina’s Wonderlands tells the story of the Hand of Fate, a “noble” adventurer supposed to liberate the Wonderlands from the yoke of the necromancer Lord Dragon and his legions of the dead who have returned, so to speak, to life. This is the starting point of the story imagined by the Gearbox Software studios. If this scenario seems to you sewn of white wire, it could not be more normal. The scriptwriters were mainly inspired by tabletop role-playing games with Dungeons & Dragons in the front line, but not only.

The very structure of the adventure is reminiscent of those long epics born of the fertile imagination of a game master who at times does as he pleases. And who better than Tiny Tina, an iconic character from the Borderlands saga with an annoying tendency to spin, to embody a wacky and volatile narrator? The main strength of the game, in terms of storytelling, lies in that unique Gearbox tone and the unpredictability of the story told. Tina alters the story when it suits her and especially in her own way, which embellishes the epic with a dose of surprise which is not to displease us.

However, it must be recognized that the ubiquitous humor will not appeal to everyone. The title hits hard and frequently below the belt to the point of defusing the epic dimension of the story with a well-felt tirade, but totally out of nowhere. Tiny Tina’s Wonderlands doesn’t stray from the beaten path when it comes to directing, but stands out for its uninhibited and often off-the-wall approach to traditional fantasy storytelling.

Gearbox Software makes up for a somewhat aging engine with a colorful artistic direction in Cel Shading which has proven itself in the past and is still proving in 2022 its ability to smooth visuals for a neat result. Tiny Tina’s Wonderlands is clearly not state of the art, and never seeks to be. On the other hand, in terms of gaming experience, the studios provide. The adventure is fluid, and above all free of bugs. No slowdown, no inconvenience of any kind comes to ruin a solid adventure technically speaking and above all exotic in more ways than one.

The studios are swapping the usual punk-apocalyptic universe that made the success of the Borderlands saga for that of heroic-fantasy with all that that implies in terms of environments and creatures. Exploring the semi-open areas that make up the Wonderlands is once again a cornerstone of the gaming experience concocted by Gearbox Software. You will have to trudge for hours in various environments, inspired by piracy, ancient Egypt, the sunken city of Atlantis or even Mordor. Tiny Tina’s Wonderlands invites players to open their eyes wide and enjoy seductively rendered settings. The same goes for the pyrotechnic effects which alone illuminate the clashes and highlight the powers of the heroes.

The gameplay is mainly based on the formula stamped Borderlands, and does not deviate from it very little, even if the novelties integrated by Gearbox Software blow a refreshing breeze on the saga. Borderlands fans will be back to their old ways seconds after stepping foot in Wonderlands. This spin-off gives pride of place to fierce battles against a renewed bestiary. It is still exhilarating to slay hundreds of the Dragon Lord’s minions with the help of an arsenal pleasant to handle and magical powers with devastating effects. Unfortunately, poorly exploited melee attacksdespite the fantasy setting, keep Tiny Tina’s Wonderlands from playfully standing out from its predecessors.

Gearbox Software goes the second for everything related to playful and cosmetic customization of avatars. The studios are giving fans a feature they’ve been waiting for for several episodes…a full character editor. No more predefined sets, there are dozens of options to modify the face, morphology, armor and decorations of your Hand of Destiny in order to create a hero in your image, or not for that matter. The decision is now yours. We must also mention the multi-class system which enriches the RPG dimension a little more by allowing two classes to be merged among the six available and thus create a theoretically unique character.

In Looter-Shooter, there is Looter. To loot, you will loot en masse, sometimes even a little too much to the point of becoming frustrating at times. It’s not uncommon in Tiny Tina’s Wonderlands to find a piece of equipment or a weapon that’s really “stylish”, but which does not correspond in any way to your hero forged during long play sessions. If the increase in power is omnipresent and rewarding the majority time, this too random management of rewards could confuse more than one. The title of Gearbox Software also suffers from a certain repetitiveness of its gameplay loop which, as its genre suggests, is all about Looting and Shooting over and over again. As fun as the formula is, it can become redundant over time.

Another novelty designed to make the Wonderlands a coherent universe… the Overworld. This overlay, which looks like an interactive map on which “chibi” avatars move, links the different zones together. If on paper this feature is a good idea, in fact it forces multiple round trips and ultimately slows down the progress of players. The Overworld is actually incidentalbut emphasizes the tabletop role-playing video game approach desired by Gearbox Software studios.

It must be admitted that the scenario, as inventive and offbeat as it is, only surprises players on rare occasions. In terms of content, Gearbox Software is rolling out a fantastic adventure inspired by cult works of the genre, not without adding that little something that makes all the difference. Beyond its ultra referenced universe which will thrill fans of heroic-fantasy and pop-culture in general, it is the totally What the F*ck sequences that make the spin-off Tiny Tina’s Wonderlands, and before it Borderlands, a project apart in the gaming landscape. Level no matter what, Gearbox Software has nothing more to prove.

Let’s go back a bit to the deluge of references and winks that punctuate the adventure. Between Dungeons & Dragons, The Lord of the Rings, Stargate or The 5th Element… there really is something for everyone… if you were born before the 21st century. Humor is too often the unwilling victim of a translation that struggles to transpose pranks, acid tirades and other oily nonsense into another language. In the present case, French dubbing and therefore the performances of the actors are to be welcomed. Despite all his good intentions and undeniable qualities, the narrative is sometimes secondary and too verbose to tape players to their chairs.

The lack of content has never been a problem in the Borderlands saga, and its spin-off is no exception to the rule. Just for weapons, equipment and loot in general, this Action-RPG has a field day even if it means satisfying the most enduring players. The blasters alone number in the hundreds of thousands or more, and that’s just the tip of the wonderlands. It takes about twenty hours to complete the main campaign and the adventure has many other things to offer. Tiny Tina’s Wonderlands features dozens of side quests, vast and rich side-play areas, and a completely redesigned End Game modeled after Diablo 3 flaws.

The Chaos Chamber promises dozens of hours of combat in semi-randomly generated dungeons. Several new bosses have even been designed for this particular mode. The lifespan of this Action-RPG is simply excellent. Finally, tradition obliges, Tiny Tina’s Wonderlands is fully playable from 1 to 4 players both cooperatively and competitively. The difference lies in the way of distributing the loot at the end of the mission.

Tiny Tina’s Wonderlands is a solid and respectful spin-off of the Borderlands saga. Gearbox Software does not revolutionize the genre in any way, but brings enough novelties to make it an episode in its own right. Tina passes the test of fire with flying colours.