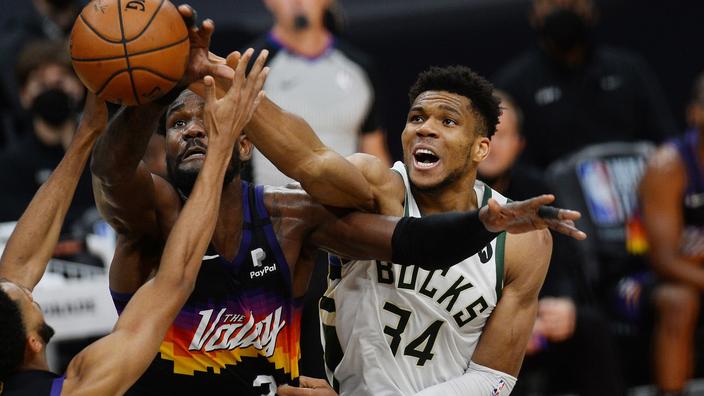 The Bucks will aim for the title this Tuesday, in front of their home crowd, during the sixth round of the NBA Finals between them and Phoenix.

The end of 50 years of famine for Milwaukee? Sacred in 1971, under the leadership of Kareem Abdul-Jabbar, the Bucks have the opportunity to add a second title to their record. This time, the local taulier is called Giannis Antetokounmpo. His lieutenants, Khris Middleton and Jrue Holiday. Beaten in the first two games of the NBA Finals, they removed the next three to lead 3-2 before Game 6 next night (3 a.m., live on beIN SPORTS), in their Fiserv Forum. 17,000 fans to push them towards the supreme coronation. Another 65,000 outside the hall in the “Deer District”. All ready to rejoice in case of success against the Suns.

«Milwaukee is obviously in a good position, and favorite, but Phoenix has lost the last two games only on small things. There was a lack of lucidity among the Suns, it may be due to a failing physique, but it didn’t play out much», Underlines Jacques Monclar, consultant beIN. And to add: “It’s possible that it will end during this Game 6, but there is a nice possibility that it will return to Phoenix.A possible Game 7 would indeed take place in Arizona on Thursday.

One thing is certain: Mike Budenholzer’s players – whose future will only be considered at the end of the series – have grown in recent years, and especially since they let slip an identical lead to the one before. Phoenix at the start of the Finals in 2019 against Toronto. “It has helped me to mature, grow and become tougher mentally. I don’t focus on the past. I try to learn from it and move on“, Underlines the”Greek Freak», Big favorite for the title of MVP of the Finals in the event of coronation of Milwaukee and which turns to 32.2 points, 13 rebounds, 5.6 assists, 1.4 interceptions and 1.2 against in the series. “We must find a way to win and never go up too high or come down too lowHe adds.

Phoenix on the brink

It will no doubt be a challenge for the Bucks to manage their emotions, as they are only 48 minutes from the title. But it’s obviously better to be in their position than the Suns… «It’s not the best situation and we all know it, but we are in the final. This is not the start of the season where you lose three or four in a row. We came here for a reason and our guys can get some confidence in itArizona club coach Monty Williams said. He will be able to rely on a boiling Devin Booker (two matches at 40 points).

«Throughout this course in the play-offs, it is the first time that we will be on the verge of elimination. So it’s for real. We must not look back now. We have to go out, be ready to play and it’s either win or come home», Summarizes Chris Paul. And the 36-year-old leader, in search of his first coronation, continues: “If we had been told that we would be in this situation at the start of the season, we would have signed immediately.“To see what it will be at the end… Remember that the Suns are aiming for the very first title in their history. The champion will succeed the Lakers.