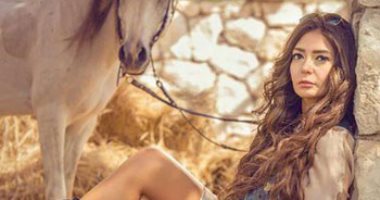 Today passes the anniversary of the birth of the late artist Mirna Al-Mohandes, who was born on May 3, 1976 in Cairo, and was an artist with a distinctive childhood and youth look since her first appearance in several series with major TV drama makers such as the series “Ahalina”, about the wonderful late drama giant Osama Anwar Okasha. And the late great director Ismail Abdel Hafez, a series that dealt with the Egyptian character from the human side and moral positions.

Mirna began her artistic life at the age of nine through television ads, and was characterized by her calm beauty and naughty, and one of her advertisements had expected her to be a strong actress.

In early 2003, Mirna Al-Mohandes emerged in the world of television drama, and the stars of the stage flocked to her to participate in their work, such as the superstar Laila Alawi, who used her in the series “Come to dream of a wheel”, and after that she participated in the series “Star of the Masses”, by the star Ilham Shaheen, and ” September Moon “, with the superstar Mervat Amin and other major works.

The artist Mirna Al-Mohandes participated in the cinema, and she presented films such as “Ayazon”, with May Ezz El-Din, and “Al-Ayyal I ran away”, with Hamada Hilal, and “Abd-al-Mawasem,” who witnessed the first tournaments of the artist Mohamed Lotfy, she also appeared in the series Religious, where she participated in the championship of the series “Imam Al-Ghazali”, with Mohamed Riad, directed by Ibrahim Al-Shawadi. Despite the departure of the artist Mirna Al-Mohandes at a young age and in the glory of her youth, she left too many works that the audience will remember through them.

Myrna passed away after a short life during which she only tasted a taste of pain after she suffered a severe drop in blood circulation due to her disease of colon cancer, on August 5, 2015.

See Also:  Find out the date of the last word program with Lamees El Hadidy, after the blessed Eid Al Fitr