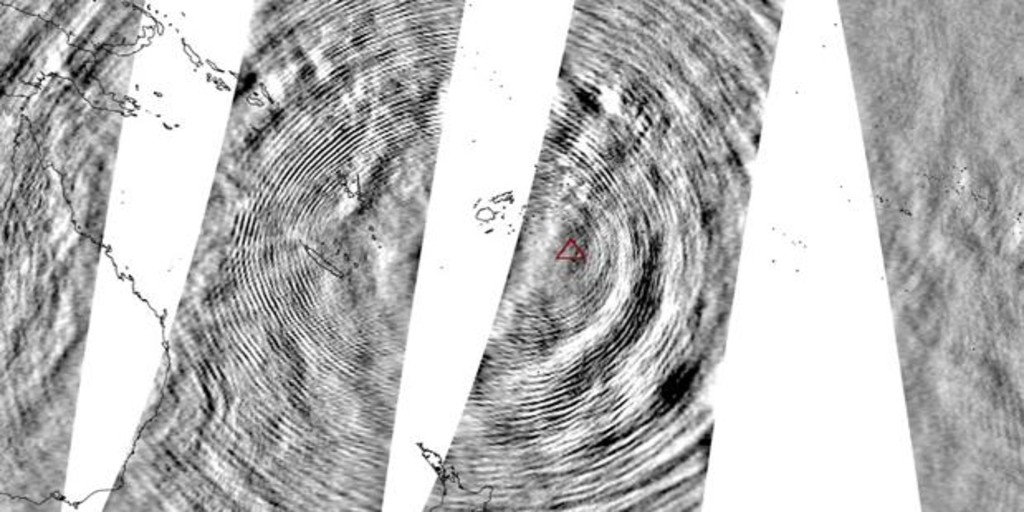 The eruption last Saturday of the Tonga volcano, which caused a tsunami warning on both sides of the Pacific and the disappearance of the island, sent some massive waves never seen in the Earth’s atmosphere. The phenomenon has puzzled scientists, who had never observed such a signal after a volcanic eruption.

“It’s really unique. We’ve never seen anything like this in the data before,” he says.
‘Nature’ Lars Hoffmann, an atmospheric scientist at the Jülich Supercomputer Center in Germany. The waves were discovered in images from the Atmospheric Infrared Sounder (AIRS), aboard NASA’s Aqua satellite, in the hours after the eruption. The photos show dozens of concentric circles, each of which represents a fast-moving wave in the gases of the atmosphere, stretching over 10,000 miles.

The waves reached from the ocean surface to the ionosphere, and the researchers believe that they probably They went around the world several times. “This instrument has been running for about 20 years and we have never seen such beautiful concentric wave patterns,” Hoffmann tells the publication.

Gravity waves in the atmosphere are produced when air molecules are disturbed vertically, rather than horizontally, in the air column. This can happen when the wind picks up speed as it rises over a mountain top or during a storm.

Theoretically, they can also be caused by the eruption of a volcano, but the truth is that nothing similar has been observed in other eruptions studied with the AIRS instrument since its launch in May 2002.

The researchers do not explain why it happened this time. Corwin Wright, an atmospheric physicist at the University of Bath, UK, points out in
‘Nature’ which may be due to a “large, messy stack of hot gases.” The hot gas is “rising high into the stratosphere and hitting the air.” For his part, Scott Osprey, a climate scientist at the University of Oxford, UK, believes that the mysterious waves have to do with the speed at which the event occurred, which was explosive.

In addition, the volcano increased atmospheric pressure throughout the world, a change that was also perceived by different barometers in Spain.

If you want to go viral, play “Wordle”: gaining distinction with four letters

Dakar: the investigation is not progressing following the explosion at the start of the race