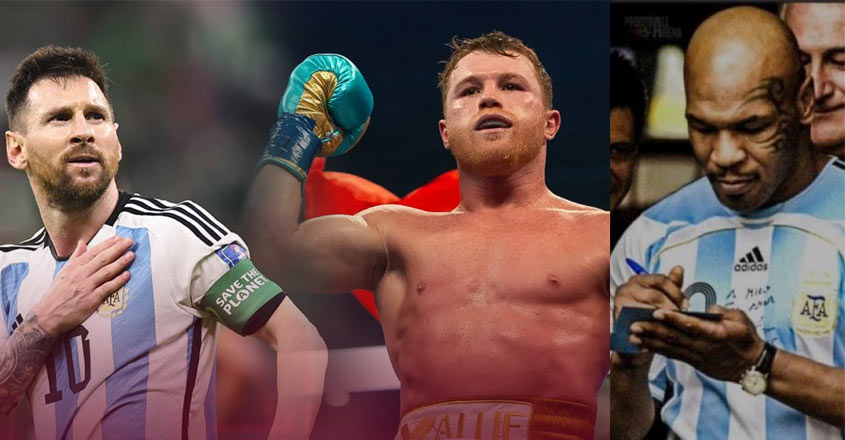 Messi and Argentina fans have no question that boxers have anything to do with the game of football. The only thing is that Mexican boxer Saul Canelo Alvarez, who challenged Messi, should be taught a lesson. The fans are making noise by actually putting Mike Tyson on the field. Fans are excited as Alvarez and Tyson ‘locked horns’ on social media.

Alvarez came forward accusing Argentina captain Lionel Messi of disrespecting the jersey of the Mexico national team. It is alleged that Messi used the Mexico jersey to wipe the floor. Alvarez also tweeted that Messi should not be in front of him. The controversy was that the jersey handed over by the Mexican star at the end of the match the other day, Messi unknowingly put it aside while taking off his boots.

A video emerged of the jersey lying on the floor as Argentina’s players celebrated their win in the locker room. Argentina former player Sergio Aguero and Spain former player Cesc Fabregas also came forward with the argument that Alvarez is reacting without knowing anything. Messi’s fan base was not ready to dismiss Alvarez’s threat. Thinking of what to do, a group thought of taking down Tyson himself.

The fans’ reaction to the news is that Tyson will answer Alvarez. Even though neither Messi nor Tyson has officially said anything about the incident, the fans have taken it by saying ‘we will take care of it’. Tyson is rumored to be a fan of the Argentinian, which is why he is being roped in.

In 2005, Tyson, who appeared in court in the case of smashing a journalist’s camera in Brazil, wore Argentina’s jersey. It was this picture that made Tyson go crazy. Other interesting memes are also circulating. Interestingly, Alvarez is a huge fan of Tyson. Alvarez has also appeared on a podcast hosted by Tyson. Tyson, who later ventured into cinema, was a guest star in the film ‘Liger’ which was released in Telugu and Hindi languages.

why Gurchenko had to perform in prisons