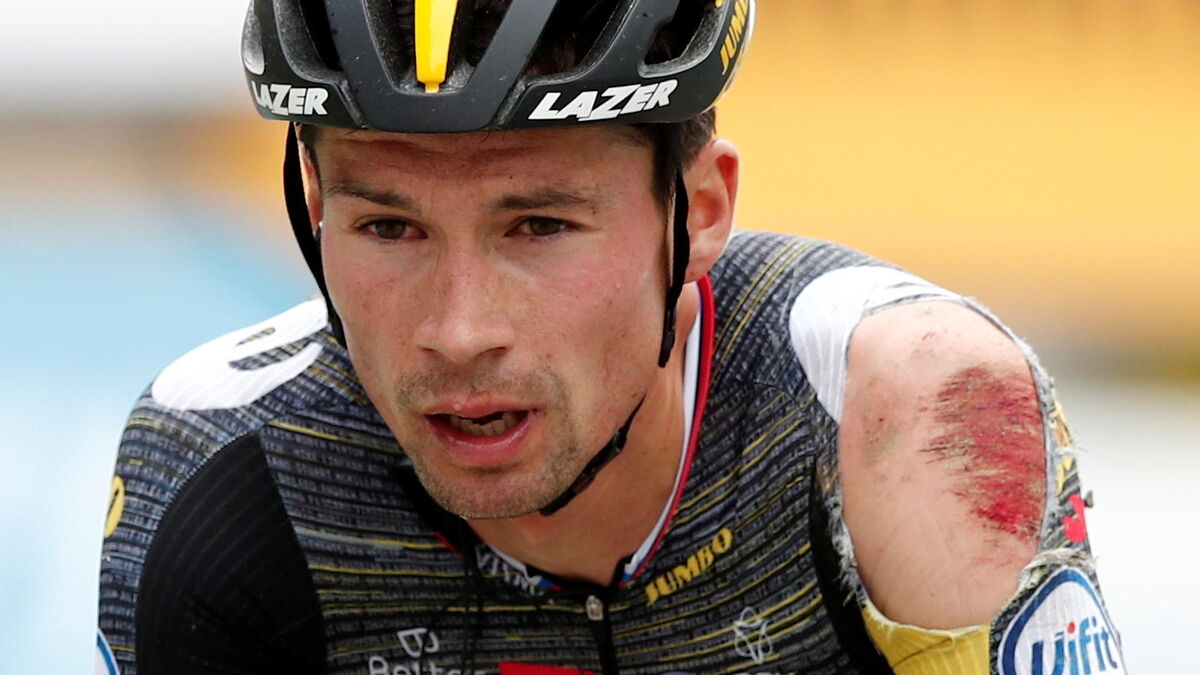 The runners fall like bowling pins and yet it is a game of billiards that was played on the rough asphalt of Morbihan. And its consequences exceed those of the day. The abandonment of Caleb Ewan (Lotto-Soudal), the best sprinter of the peloton, necessarily reshuffles the cards for the next arrivals on the flat. Starting with the 4th stage this Tuesday in Fougères. Peter Sagan (Bora) also suffers from a large hematoma. Sonny Colbrelli (Bahrain) but above all Arnaud Démare (Groupama-FDJ), who escaped unscathed from his fall 4 km from the finish, can take advantage of this.

But it is inevitably at the level of the general classification that this stage can leave traces. Barring new moves from Trafalgar in Ille-et-Vilaine, the prospect of seeing Julian Alaphilippe regain his yellow jersey after the 27 km stopwatch between Changé and Laval on Wednesday has taken on a new dimension. Monday morning, the possibility for Alaphilippe to put the sun back on his shoulders was tenuous.

Not because of Mathieu van der Poel, the current yellow jersey, objectively less good roller. The 8 seconds lead of Poulidor’s grandson is not prohibitive for the world champion. The obstructions from dreaming in yellow were Slovenians: Alaphilippe was only 5 and 6 seconds ahead of Tadej Pogacar and Primoz Roglic.

On a rolling course like that of Mayenne, the two Slovenes were largely able to make up this small delay. But everything has changed. Pogacar, caught in a break, now points to 31 seconds from Alaphilippe. And it’s worse for Primoz Roglic, decidedly angry with the balance. After his falls in the Critérium du Dauphiné 2020 and Paris-Nice 2021 which cost him the victory, his violent knockdown did not scratch him only on the right side. She already moves him away at 1′27 ′ ‘from Alaphilippe. “Nothing is broken,” he breathes. I am completely open, but I can continue. “To regain the yellow jersey this Wednesday, the greatest danger for Alaphilippe will be the Belgian champion Wout van Aert, excellent rider and only 21 seconds behind.

But for the rest of the Tour, Roglic, if he is able to continue, has already damaged his morale and his chances. Especially since he has just shown too much nervousness for a man supposed to control the pressure and his emotions. At Ineos, the other strong team of the Tour, the leadership seems to take shape naturally: after Richie Porte, it is Geraint Thomas, the winner of the Tour 2018 who is having difficulty. Victim of a dislocation of the right shoulder, reduced during the race, the Welshman appears diminished. And the Ecuadorian Richard Carapaz, winner of the 2019 Giro, now seems to be in the best position. After only three steps, the cleaning seems done as after a fortnight …