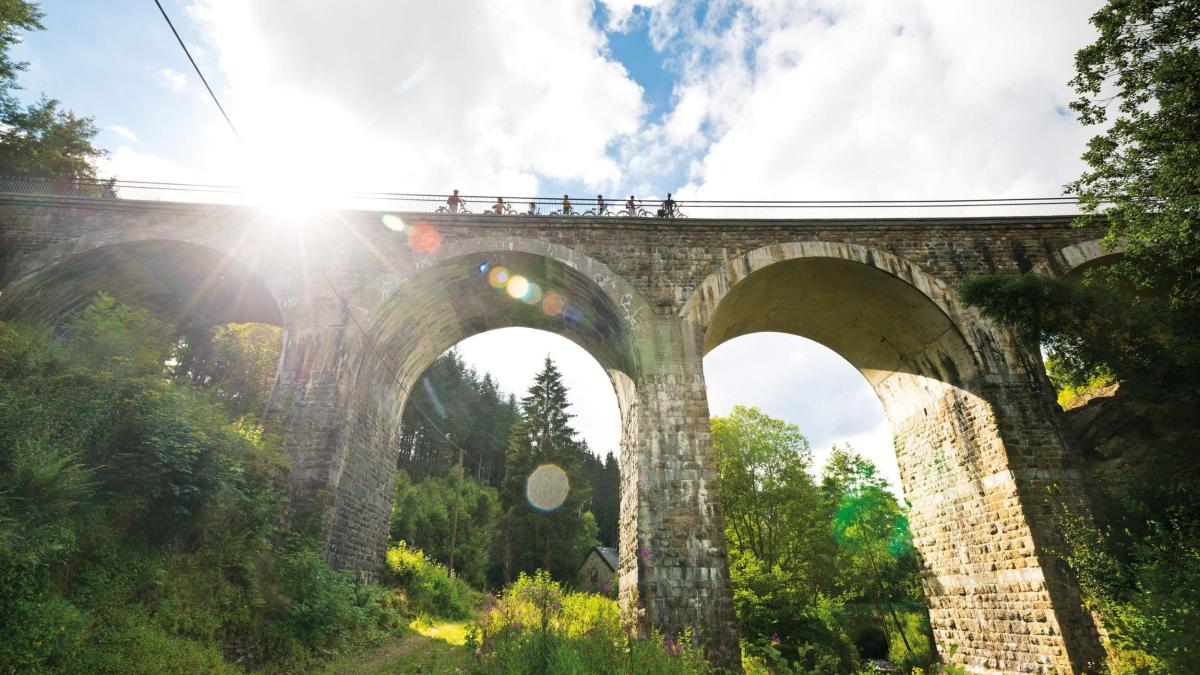 EActually we have nothing against bats, on the contrary. But this time we curse them. Because of you, we have to pedal up a ten percent incline in the Luxembourg Ardennes. Sweat runs from his forehead.

Since a colony of bats settled in the tunnel of Huldingen, which connects Luxembourg with Belgium, cyclists have had to take a scenic, but arduous detour to protect species. On this three-day bike tour, however, it will be the only notable mountain stage.

With an average gradient of only two percent, the level of difficulty on the Vennbahn cycle path is otherwise rather moderate. With its 125 kilometers, which lead from Ulflingen / Troisvierges in Luxembourg across the Belgian eastern cantons and Germany to Aachen, it is one of the longest and most beautiful railway cycle routes in Europe. The General German Bicycle Club has ennobled the Premiumweg with four out of five possible quality stars.

Our group of cyclists started in Ulflingen. The town seems to have dozed off, although there was a real economic boom here from the end of the 19th century.

Via the railway junction on the Vennbahn, named after the High Fens in Belgium, Luxembourgish iron ore was transported to the Aachen district and the Ruhr area, and coal in the other direction. Workers used the train to get to the steel mills. Farmers loaded them with piglets and grain.

In the 1980s, the transport of goods and passengers gradually ceased. But instead of leaving the once much-used railway track, on which up to a hundred trains were traveling every day, to decay, Luxembourg, Belgium and Germany decided on a joint tourism project. Some of the tracks have been removed and the route has been converted into a varied long-distance cycle path.

As the journey continues, it becomes clear that the Vennbahn is a curiosity under international law. No matter where you cross the border on your way, you almost always stay on Belgian territory. As the?

Information boards provide information about the historical events: As part of the Versailles Treaty, which dictated new borders in 1919 after the First World War, the approximately ten-meter-wide railway embankment across the Ardennes, Eifel and Hohes Venn, including the railway stations, was awarded to the Belgian state.

As a result, five German exclaves were created. To get to these five German areas, which are cut off by the railway line, you have to cross the Vennbahn cycle path and thus Belgian land.

Almost unnoticed from Luxembourg to Belgium

But these geopolitical refinements do not play a role on this tour. First you have to climb the summit above the bat-inhabited tunnel. There was once a tavern upstairs, where glasses rattled when the locomotives rumbled down below.

Along golden yellow bushes and thick forests, from which there is a smell of fir trees, it goes down again; this time the wind cools, not the sweat. If it weren’t for a sign saying “Belgique” in the middle of a lonely field and meadow landscape, travelers on the Vennbahn cycle path would not know that they are crossing from the Grand Duchy of Luxembourg to the Kingdom of Belgium.

We cycle towards the Our and arrive at Burg-Reuland with its old train station. The main building, now privately owned, has retained its Gothic lettering on the brick facade. Railway nostalgics get their money’s worth on the Vennbahn. It’s like cycling through a single open-air museum.

Every few kilometers you come across relics from the past heyday of train traffic: signal masts that are no longer in use, remains of tracks and switches overgrown with weeds, bridges made of natural stone and bold arched viaducts, rusting locomotives and wagons, empty goods sheds, waiting rooms in which there are except for spiders and lizards, no one can stop them.

The bike path leads through a nature reserve

North of Sankt Vith, the route leads past the Rhine-Maas watershed, and cyclists move through the nature reserve in the Emmelstal. Moist heather and bristle grass are oases of survival for breeding birds such as meadow pipit, field swirl or marsh warbler. The grazing highland cattle do not allow themselves to be disturbed by the cyclists, no matter how conspicuously they are wrapped in fluorescent sportswear.

The town of Waimes is headed for the first overnight stay. On site, you can enjoy the refreshing “Peak” beer, which is made with Venn water in a brewery on Belgium’s highest point, the 694-meter-high Signal de Botrange, not far from the cycle track.

The next day, the high plateau of the High Fens is soon to be climbed. Peat bogs spread to the right and left of the cycle path, and isolated thin trunks stretch their skeletal branches into the sky. The bristly scenery is a refuge for the black grouse, a pheasant-like bird that is threatened with extinction. The high beech hedges not only protect the houses from the heat in summer and from freezing cold in winter, but also protect cyclists from treacherous winds.

“This train leads to hell!”

In Sourbrodt, the Prussian architecture of the former station building, in which private apartments are now housed, as well as ghostly signal boxes and station guards’ houses testify to the former splendor of the place. Just as busy as the freight traffic was once the bar in the more than 20 restaurants around the station.

The “fiery Elias” contributed to the lively consumption of beer and brandy. This small train was actually intended for the transport of feed and straw. It was also used by soldiers from the nearby Elsenborn military area, who came with it to the inns in the village. The pub visits sometimes got so excessive that the village priest warned from the pulpit: “This train leads to hell!”

Downhill in the saddle to the Ruitzhof exclave, which only has a handful of houses. In a railway wagon set up as a café from the 1950s, tourists fortify themselves here with bread with Ardennes ham and waffles before pedaling in a convoy with handcars on a remaining track to Sourbrodt and back.

But which country is actually responsible for what in this border confusion? A cross-border coordination office located in Sankt Vith, Belgium, takes care of the upkeep of the Vennbahn and uses rules of conduct to ensure that cyclists, hikers and inline skaters get along well.

In the event of an accident on the route – a rare occurrence – the emergency services who can be on site the fastest are alerted. Unlike it was the case in wartime, the border situation along the Vennbahn, as bizarre as it may be, is a living Europe, in which problems are solved unbureaucratically for a change.

Mützenich, a suburb of Monschau, is another German exclave created by the Treaty of Versailles. The neat houses look as if they came from model railway catalogs: half-timbered houses, wrought-iron balconies, meticulously trimmed lawns.

A life-size bronze sculpture at the old customs office, depicting a smuggler, recalls the times when tons of coffee were smuggled from Belgium to Germany between 1948 and 1953. Some of the goods were transported with the Vennbahn, which earned the nickname “Mokka Express”.

The restaurant at the former train station in Roetgen seduces “Coffee tea” for a lunch break. Not least because of its special location, the cycling meeting has cult status. Run by the German couple Norbert and Waltraud Siebertz, the bistro is a Belgian island in the middle of the German town of Roetgen.

Norbert Siebertz explains that he pays corporate taxes to the Belgian state and that he has to comply with Belgian liquor laws. In the pandemic, it was Belgian police officers who monitored compliance with the corona rules.

The bike trip ends in Aachen

The finish line for the bike tour should actually take place at the Rothe Erde train station in Aachen. But since this is rather uncomfortable, the tour participants celebrate the final a few kilometers beforehand in Kornelimünster. The historic center of Aachen’s most picturesque district, with the medieval abbey church of St. Kornelius in the middle, has been almost completely preserved.

In the past, believers used the Vennbahn to take the pilgrimage to the place of pilgrimage to venerate cloth relics that are said to be associated with Jesus. Those who are not into relic worship can toast the successful three-country route on the paved market square with abbey brews, to all the ex- and enclaves crossed and to the bats that should have long been forgiven.

Getting there: The train stations at the start and finish points in Ulflingen / Troisvierges and Aachen are connected to the rail network. It is essential to inform in advance about taking bicycles on the train (bahn.de).

Participation in the trip was supported by the Ostbelgien Tourism Agency. You can find our standards of transparency and journalistic independence at axelspringer.de/unabhaengigkeit.