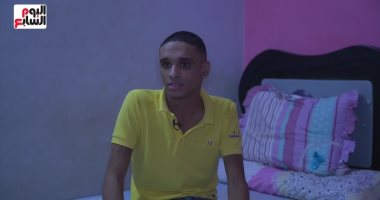 Young university student Islam Alaa Abdel Karim suffers from Tourette’s syndrome, as 13 years have passed since the age of Islam, born in 1999, and he is besieged by a rare disease.Tourette SyndromeThe nervous disorder, which always appears in childhood, and the sufferer suffers from strange movements and convulsions, vocal behavior and involuntary chanting of bad words.

A journey with Islam began with some simple movements that prompted him to go to a number of doctors specializing in neurological diseases, but Islam’s suffering is still the same. There are different types of drugs, both narcotic and hypnotic, that a number of doctors tried to introduce to Islam to no avail. According to what Islam confirmed to “The Seventh Day”.

Islam said: I had Tourette’s syndrome 13 years ago, and it is a very rare disease, which completely destroyed my life since it was owned by me. And the street refuses to admit my illness and my suffering, there are those who attack me and accuse me of taking narcotics, and others treat me as if I am a petty young man performing an acrobatic show in front of passers-by, words directed at me day after day and signs that chase me from everyone in the street, and when confronted by them they are completely ignorant of the name of the disease, and among all 100 Someone who attacks me comes out who defends and supports me.

Alaa Abdel Karim, the father of Islam, said: My son had a wonderful childhood, he excelled in his studies and diligent, and he always won first place according to the certificates he obtained before the appearance of symptoms of the rare Tourette syndrome.

The patient’s father continued: After joining the preparatory stage, he showed some strange behavior, the beginning of which was repeated tremors in the eyes and face continuously, so we decided to go to a doctor specializing in neurological diseases, to find out that he had Tourette’s syndrome, about which we know nothing.

And Alaa added: We moved quickly to present the case of Islam to more than one doctor, to try to understand what is happening and quickly treat it, and after suffering days, weeks, months, and even years, and various and multiple medications, some of which are for depression patients and those recovering from drug abuse, and others used to treat widespread dangerous diseases, the case of Islam remained get worse.

Here, Islam picked up the conversation from his father and said: When I decided to deal with the disease, I went to the street and dealt with my requirements, and I found everyone bullying, from the independence of taxis and their drivers as well, and some passers-by on the street, including those who say that I suffer from electricity in the brain, but I kept dealing Calmly explaining my suffering, some of them accept and some of them continue to bully, and only my psychological state remains that is wrestling with this tragedy.

Islam’s grandmother, a woman of Bouchoucha, always sits near the door of his room, and the Qur’an does not leave her, and she does not stop praying for a speedy recovery, she told us: Everyone loves Islam, as he is a good, respectful person, loves all people and is calm, even when he is in the stage of his illness that made him curse continuously Neither the family nor the family were angry with her, but they were all very sad for him, and they wished someone could help find a cure.

Aslam’s mother said: I, as a mother, watches her son in this condition daily, I feel bitterness and pain that I cannot describe, my heart breaks at every moment, but God’s judgment does not meet with any objection. .

Scientific studies confirm that people with Tourette’s syndrome have some health disorders and are also full of vitality, despite the challenges they face in society.

Surviving the infection and unknown high fever, the drum drum will restart the Kaohsiung concert in July | Lu Siwei | Please answer if you hear it