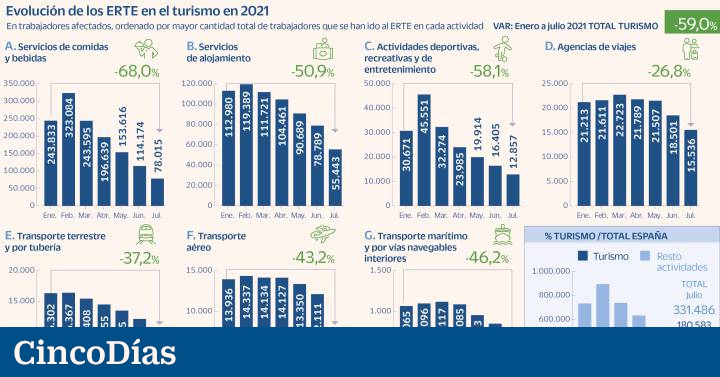 Hotels, restaurants, bars, travel agencies, airlines, buses or cruise ships will put the bandage on before they hurt themselves. The fall in foreign tourism in high season, only partially offset by the pull of the national, has meant that only 50% of the travelers in the summer of 2019 have been reached and that only 55% of the employees in ERTE have recovered since that started the year.

Of the 738,969 jobs suspended in January, the vast majority due to force majeure derived from Covid 19, it has risen to 331,486 in July, with the return to the labor market of 407,483 workers. The end of summer is approaching and except for the Canary Islands, whose high season is in winter, and some destinations on the Costa del Sol and the Valencian Community, the rest of the activities will have to draw the blind until the summer of 2022.

In this context, employers and lobbies are going to emphasize the extension of the ERTE when they return from vacation as the only way to avoid massive layoffs in a scenario in which recovery is not in sight until the summer of 2022. José Luis Zoreda, Executive Vice President of Exceltur, demands that this mechanism be maintained until the end of next year and also demands that temporary hiring not be abolished in the future negotiation of the labor reform. “Temporality is key for the sector, since it affects tourism in a very different way from other sectors.”

Along the same lines, Emilio Gallego, Secretary General of Hospitality of Spain, remarks that the uncertainty in which the sector lives forces the ERTE to be extended in 2022. “They have been the true direct aid that the sector has not received. It must be maintained until a certain level of normality is recovered. There is still a very high inactivity base in the hospitality industry: the bars do not work, there is no service in the interiors and there are still limited capacity and hours ”, he summarizes. In his opinion, lERTEs are the only mechanism that currently guarantee the maintenance of employment and the survival of companies. Gallego assures that they will convey this message to the third vice president and Minister of Labor at the meeting that will be held on September 2 by the members of the Negotiating Commission of the State-Level Labor Agreement for Hospitality, which includes the employers’ association Cehat and Hospitality. of Spain and the unions CC OO and UGT.

The impact of ERTEs by activities, however, has not been the same. The two sectors that have benefited the most have been the hotel industry (bars, restaurants and cafes) and hotels. The hospitality industry has been able to recover 259,417 employees so far this year, 68% of the staff in ERTE, and the hotels have done the same with 165,818 workers, 50.9% of the staff in ERTE. Both have benefited from the high season and the pull of national tourism, but at the same time they are threatened by the arrival of the low season, which can cause many of the recovered workers to return to the ERTE and they recover the figures from the beginning of 2021.

On the other side are travel agencies, perhaps the activity most affected by the absence of travelers. Of the 21,213 jobs suspended, it has only been able to recover 5,677 workers, just 27%. Carlos Garrido, president of the Spanish Confederation of Travel Agencies (CEAV), calls for the extension of the ERTE with the same bonus scheme until spring 2022. “We are the tourism activity that has the most personnel with suspended employment. We want to avoid at all costs that we are put in the same bag as hotels or transport. It is important that it is known that we will come out later ”. In fact, he emphasizes that revenues have not exceeded even half of those reached in the high season, since foreign tourism has failed, along with business and conventions. “Our way out of the crisis will be slower and more gradual,” he emphasizes.

Another business claim focuses on remove or relax the job maintenance clause, which establishes that a worker in ERTE may not be fired until six months after the last suspension of employment ends. Employers complain that this measure prevents adjusting the workforce and forces them to be maintained despite the fact that revenues are in free fall.

Job. The Sepla union, which represents the pilots, has opened a battle with the airlines over the maintenance of the ERTEs. Of the 13,936 jobs suspended in January, it rose to 7,915 at the end of July, 43.2% less. With air traffic at 76% of what it was before the pandemic (183,267 flights in July) and the volume of travelers at 50%, the union defends that it is time to abandon the ERTE and seek alternatives in collective bargaining and They denounce the poor economic situation of many pilots and other crew members due to the loss of income.