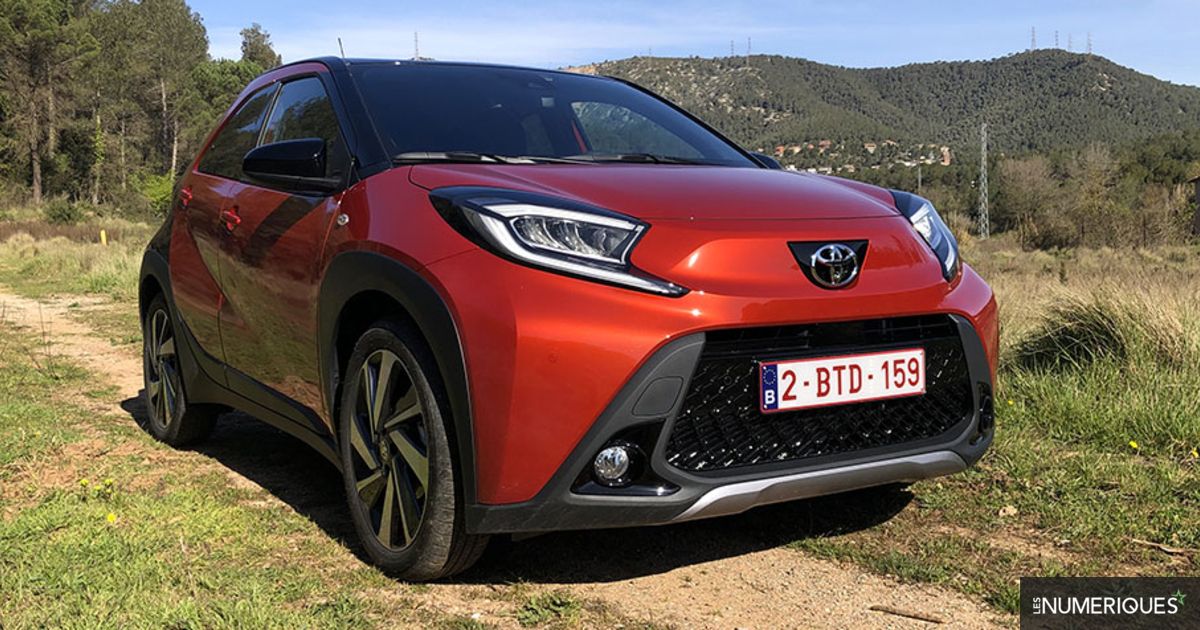 A distant cousin of the late Peugeot 108 and Citroën C1, the Toyota Aygo continues on its merry way. Called Aygo X, this 3rd opus, which adopts the codes of the SUV, is neither hybrid nor electric. A convertible version (Air Limited) is also offered, only with automatic transmission.

This will have escaped no one: the market for so-called micro-city cars has shrunk to a trickle. The Peugeot 108, Citroën C1, Ford Ka+, Opel Karl, Opel Adam, Suzuki Celerio have disappeared from the market while others, such as Smart, opted for a purely electrical solution. In question, lower profitability for manufacturers and a genre neglected by customers, who fall back on the SUV.

As a result, the offer is today confined to rare models such as the Fiat Panda City et Cross, the Hyundai i10, the Volkswagen uP! — derived also in version electric -, le Suzuki Ignis and of course the Renault Twingo. Another survivor, the Toyota Aygo, cousin of the late Peugeot 108 and Citroën C1. The manufacturer has decided to continue the adventure alone with a 3rd opus, the Aygo X (pronounced Aygo Cross).

For the occasion, this new Toyota takes on the costume of the SUV like its big sister, the Yaris Cross, from which it borrows its TNGA-B platform.

Taller, longer and featuring new two-tone and “spicy” colors (ginger beige, cardamom green, chilli red and juniper blue), this new Aygo X, whose entry ticket is €15,990, will does she seduce?

Available in five finishes (Active, Dynamic, Design, Collection and Air Limited), we had the Aygo X Collection in our hands with a manual gearbox, billed at €19,690 without any penalties or bonuses.

The Aygo X is directly inspired by the concept car Toyota X Prologue unveiled in March 2021, especially in this two-tone Chili Red colorway. Certainly, we do not find the same gaping mouth (although the mesh air intake located in the lower part of the shield impresses) nor the huge wheel arches, but the dynamic line is preserved.

However, our Aygo X Collection Chili Red does not leave anyone indifferent, in particular its rear end and its black-tinted wheel arches, not to mention the large 18-inch wheels.

Like the exterior line, the passenger compartment (16% larger) is distinguished by the simplified design of its dashboard, all in curves. It is highlighted at each end by clever aerators – circled in shiny plastic – taking the form of a terrestrial globe that is pivoted in all directions to direct the air.

Like the Yaris Cross, we regret an austere side which accentuates the dark aspect of the cabin, despite the presence of a colored insert around the touch screen. For light, it will be necessary to opt for the convertible version, Air Limited.

Thanks to an increased wheelbase, legroom for the only two rear passengers is correct. Two drawbacks, however. The first is a slightly low roof guard, especially for those over 1.77 m. The second concerns the difficult access to the rear seats due to the doors which do not open sufficiently, unlike those in the front, whose opening angle has been increased.

It should be noted that the rear door windows cannot be lowered, but open like rear quarter panels.

Finally, the best off remain the front passengers, who gain in comfort with seats installed higher and moved back by 2 cm, thus allowing more shoulder space (+4.5 cm).

As for the trunk, its volume increases by 63 l to offer a capacity varying from 231 to 829 l once the seats are folded down.

Once installed in the cabin, we find ourselves facing a very wide dashboard. This is due to the fact that the windscreen pillars have been moved back, thus offering a wider field of vision (+10%).

Just like on the previous version, the element that stands out the most is the instrument cluster surmounted by an XXL cap. The latter incorporates a mini LCD screen on which scrolls various information related to driving and the organs of the car. Everything is controlled from the multifunction steering wheel.

But the one that steals the show is the 9-inch (22.86 cm diagonal) touchscreen that equips our Collection finish. It is also present on the discoverable version. On the other hand, for entry-level finishes, you will have to be satisfied with an 8 or 7-inch screen (diagonals from 20.32 to 17.78 cm).

This central screen has direct access keys on the left side allowing you to return to the home page. Basic, there is a succession of functions (Media, Phones, Services, Vehicle, Profile, Road Events and Parking Search) arranged like smartphone icons.

Toyota Smart Connect home infotainment provides real-time road traffic alerts, geolocation of a car park and will make it possible in the future for new services to appear via remote or Over the Air (OTA) updates. ).

In use, the Toyota system is easy to use and fluid, although a bit austere, especially in terms of navigation. We will prefer Apple CarPlay (wireless for high-end finishes) or Android Auto. We note the presence of a single USB-A socket and an induction charger.

We regret that is not offered – even as an option – a head-up system, as on the Yaris Cross.

As much to say it right away, despite its air of an adventurer, the Toyota Aygo X does not really appreciate going out of town. It must be said that with 3.70 m long and its ultra-small turning radius of 4.7 m, it is the queen of slots.

It’s time to start our Aygo X via the large button provided for this purpose. The three-cylinder snorts and is (a little too) heard, especially when it comes to climbing the hill of the old auto-motorcycle circuit of Montjuïc.

It must be admitted that on the sound filtration side, we have known better. For the sake of economy, there is a direct link with the sheet metal of the bodywork. While driving, we noted – driver’s side – 62 B at 50 km/h and 71 dB at 130 km/h.

Thanks to its pocket size and despite its large 18-inch rims, the Aygo X is particularly playful and easy to handle in town. The accelerations of its valiant three-cylinder are sufficient, perhaps because the 72 hp and 93 Nm of torque have only 970 kg to drag.

Another reason for satisfaction, the steering is precise and the front end agile. As for braking, the pedal attack offers a frank response.

Where the picture darkens is when it comes to getting out of town. We suspected it, but it’s a fact: the highway and mountain walks are not his cup of tea. Indeed, you have to constantly play with the gear lever to restart the engine and take advantage of its extension, which makes it excessively noisy. Finally, with regard to damping, if the front is convincing, it will quickly punish the buttocks of your rear passengers with its stiffness.

It will be understood, the Aygo X prefers to play it cool in the heart of the cities where it will shine for its compactness, but also for its low consumption which we will detail in the following part.

On the safety side, the manufacturer has developed an in-house pack called Safety Sense. Although a city car, the Aygo X benefits, like the previous version, from driving aids (ADAS).

The Aygo X combines sensors, monocular camera and wave radar, which gives it a pre-collision safety system with detection of vehicles, pedestrians and cyclists, also active in intersections. We also note the automatic lighting of the headlights and an emergency call system.

The line crossing alert with help to keep in line, which does the job properly without the ping-pong effect with the white lines, a trajectory assistant and an intelligent adaptive cruise control are in the game. There is also a reversing camera as well as a rear seat occupancy reminder system (very practical with young children).

Unlike the Yaris, the Aygo will only be available with a combustion engine. Exit the hybrid, which would have increased the weight of the car (940 kg) but also its price.

Under the hood, there is the 1.0 l three-cylinder petrol engine developing 72 hp (93 Nm torque) associated with a five-speed manual gearbox. An option allows you to opt for a sequential or automatic gearbox (S-CVT).

Toyota announces an average consumption of 4.9 l/100 km (WLTP cycle) with the manual transmission against 5 l/100 km with the S-CVT transmission. Which makes it one of the most economical micro-city cars on the market. Note that the gas tank is rather small with 35 l.

During our test, we obtained an average consumption of 5.2 l/100 km from the on-board computer, with urban use and a few fast portions, which would have led us to a range of 657 km. The Aygo X therefore prides itself on great sobriety, and its low consumption even allows it to overshadow micro-hybrid competitors.

Helena Noguerra, new course with Fabien Galthié, towards a wedding this summer!