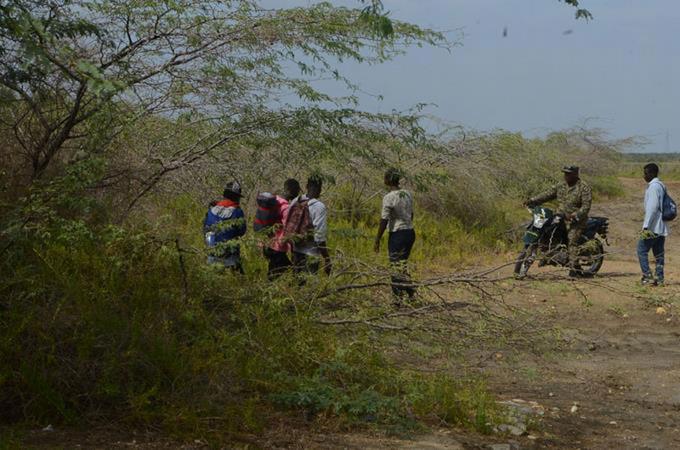 The trafficking of Haitian children and adolescents has increased along the border of the Dajabón province and most of them are transported to the city of Santiago, where they roam carrying out various activities.

They walk the streets with shoe polish drawers, others clean vehicle windows in some intersections, but there are also those who are dedicated to ordering, collecting bottles, plastics and other objects that people dump and that they can sell.

The trafficking of children and adolescents occurs despite the military reinforcement that the Dominican military and immigration authorities have ordered on the border line between the two Caribbean countries.

Many of these children and adolescents also spend the night in public places and sleep in abandoned buildings and other places.

On many occasions, agents of the Municipal and National Police have intervened a destroyed house and another under construction located on Calle del Sol, almost at the intersection with Avenida Francia, which are abandoned and serve as a refuge for Haitian adolescents.

The Santiago Human Rights activist, Jorge Galván, told Listín Diario that the problem is dramatic and an urgent solution must be sought because more are arriving every day.

According to Galván, when these minors are transferred from Haiti, they are exposed to all kinds of abuse by traffickers.

While a Migration official in the North zone explained to Listín Diario that there are international treaties and organizations that prohibit the expulsion of Haitian children and adolescents and from other nations who spend the night on the streets of Santiago.

He stated that they can be picked up and housed in the National Council for Children and Adolescents (Conani), but not repatriated despite the fact that they were not born in the Dominican Republic and that they are victims of mafias that operate in Haiti in collusion with Dominicans.

Haitian professor Jean Baptiste, former leader of the organization Civil Protection of the Northeast of Haiti based in Cap Haitien, proclaimed that the trafficking of children to the Dominican Republic is serious.

At the same time, he complained that many of them are easy objects for the “poteas”, as traffickers are known in Haiti, to abuse them mercilessly.

He stressed that contrary to the Dominican Republic, in Haiti teenagers who commit crimes were sent to jails along with adults who abused them.

But that due to pressure from entities in his country and international organizations, he has managed to clear these children from prisons and since they do not have relatives to shelter them, they spend the night on the streets of their country and that criminals take advantage of to traffic them to Dominican territory.

Similarly, he expressed that now they are not returning them from the Dominican Republic, but that there are people, many of them of Haitian origin, who use them and exploit them in the streets to make a profit.

The lawyer José Alberto Peña, vice president of the Coordinator of Popular Organizations of the South zone of Santiago, reported that together with representatives of other entities, they rescued seven Haitian children, three girls and four boys, who were exploited by their compatriots.

The children resided in the impoverished sector known as Cañada del Diablo.

“They (Haitians) used to ask them in the streets, to clean shoes, sell flowers, polish vehicle windows at traffic lights, we expelled these abusers from our area and we handed over the children to the authorities ”He commented.

An activist from the Acción Callejera organization said that they are monitoring these children, but that so far they have identified 14, who are exposed to the danger of being infected with Covid-19 and various abuses.