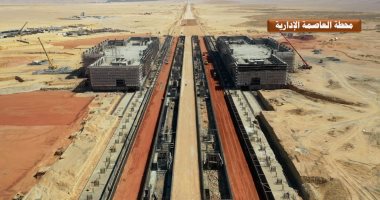 Engineer Kamel Al-Wazir, Minister, inspected Transport, Accompanied by the president and leaders of the National Authority for Tunnels and Public Roads and Bridges, the new administrative capital station with the express electric train project, where the tour began by following up the progress in the implementation rates of the capital station, which is an interchange station with the light electric train LRT and is considered a center for various means of transportation coming to the administrative capital and serves as Basically the new administrative capital, the Sports City, as well as all the new cities in eastern Cairo, as it is one of the largest stations in the Middle East, with an area of ​​more than 1,100,000 square meters in parking areas and commercial areas, and the station includes a commercial mall on an area of ​​70,000 square meters. The station also consists It consists of two main buildings, each consisting of a basement, ground floor, mezzanine, and first floor, and there are 3 pedestrian bridges to connect the two buildings. The optimal administrative and investment plan for all spaces in the station, and a plan to intensify all work to be completed according to the specified schedule With the great importance of the station in providing distinguished services to passengers.

This comes within the framework of preparations and preparations for the inauguration of the first line of the Ain Sokhna/Al Alamein/Matrouh/Fayoum electric train line project from the New Administrative Capital station, in implementation of the political leadership’s directives during the COP27 climate conference to be held in Sharm El-Sheikh next month.

The Minister inspected the implementation rates of the railway bridge in the distance from the capital station to Mohamed Naguib station, and reviewed the progress in the implementation rates of the first sector, which will be handed over to Siemens on the agreed date to carry out the electromechanical works, provided that the rest of the project sectors continue to be delivered after the completion of civil works out.

In the Mohamed Naguib station, the minister followed up on the progress of the implementation rates of the station, which serves the areas of Katameya, New Cairo and the new urban areas located south of Ain Sukhna Road.

The Minister of Transport also reviewed, during his tour, the timeline for the implementation of civil works for the various sectors of the project, such as the train bridge works, which include earthworks, foundation works, industrial works and slope concretes, which protect the sides of the bridge and the gorges, which are implemented by major national specialized Egyptian companies, in conjunction with the periodic and continuous supervision of the international company Systra. The project consultant for all implementation stages of this vital and important project. The Minister also stressed the project consultant, Sestra, to provide him with a periodic report on the progress of all work on the project.

The Minister met the project’s workers and conveyed to them the congratulations of President Abdel Fattah El-Sisi, President of the Republic, on the occasion of the October holidays and the Prophet’s birthday, and stressed the need to work around the clock and intensify work and implement them according to high quality standards, especially with the importance of this giant project, which constitutes a huge qualitative leap in the means of transportation in Egypt .

In press statements on the sidelines of his tour, the Minister of Transport also confirmed that this inspection tour comes in implementation of the political leadership’s directives to expand sustainable, environmentally friendly green transportation and in preparation for the inauguration of the first line during the climate conference next month, as well as to follow up the completion rates of this giant project in accordance with the plan. The time frame set and in accordance with the controls and standards that were agreed upon, especially with the importance of the project, as the first line is a new Suez Canal, which will link the city of Ain Sukhna on the Red Sea and the cities of Alexandria, El Alamein and Matrouh on the Mediterranean with a length of 660 km.

He pointed out that the new high-speed electric train system consists of 3 main lines with a length of 2,000 km, and that the rapid electric train project is a great epic that is being implemented on the land of Egypt, and that the rapid electric train system will represent a huge qualitative leap in the means of transportation in Egypt, and will cover all parts of the Republic, as well. Besides being development arteries serving the new and existing urban and industrial areas, it will contribute to reducing and shortening the travel time between governorates to more than half the time that the citizen currently takes, whether through the old train network or through the current roads linking the governorates. It also serves the transport of goods between ports and governorates and shortens the time for transporting these goods. This giant project also contributes to creating thousands of job opportunities.

“Little Dragon Girl” was cut off from financial aid… The recent situation of “queuing in the street to receive a love meal” revealed that he was shocked: like a homeless | Entertainment | CTWANT