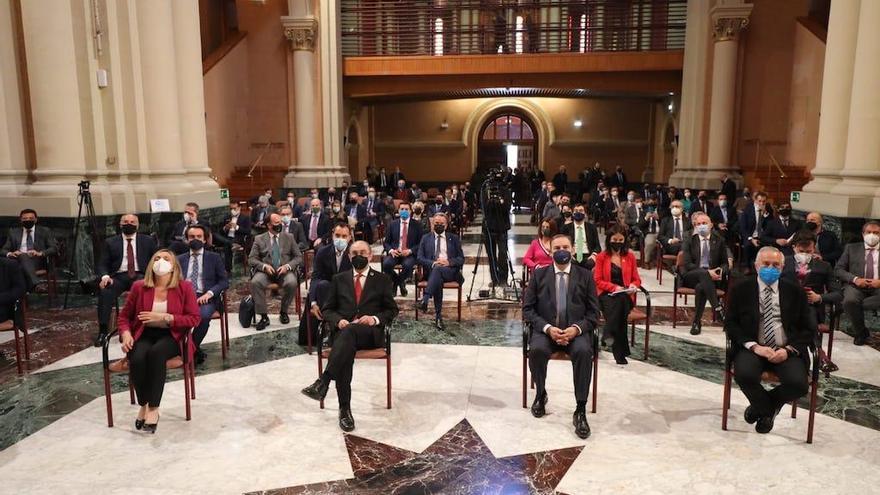 Almost 200 trucks circulate daily between Zaragoza and the Port of Algeciras in each direction. 20% of this freight traffic that now goes by road will be able to get on the train from 2023 when the rail highway becomes a reality (technically called ferroutage) that will link the Plaza logistics platform and the Andalusian maritime terminal – the gateway to North Africa – through the central branch that passes through Madrid, Córdoba and Antequera. The project, which is called upon to revolutionize the goods transport model in Spain, is expected to materialize with the investment of 100 million euros in a first phase. Its achievement will make it possible to significantly reduce the CO2 emissions generated by the bulky cargo flows that move through this corridor, mainly monopolized by the automobile, agri-food and textile industries.

The announcement was made this Friday by the president of the state railway manager Adif, Isabel Pardo de Vera, and the Minister of Transport, José Luis Ábalos, in a conference organized in Zaragoza by the Government of Aragon, which has been working since 2016 to promote this logistics initiative in the hands of the Junta de Andalucía. The support of the central government will allow the adaptation of the current itinerary of the road so that it is possible to operate this type of intermodal transport, which represents an opportunity to boost Aragon’s foreign trade with the African and European markets.

«It is a priority objective to be put into service as soon as possible given the interest aroused in private agents’, Pardo affirmed based on the consultations made with the main transport companies that operate this corridor, some of them based in Zaragoza such as Marcotran, Sesé or Carreras. Adif has been working on the project for two years, for which it already has a diagnosis of the existing infrastructure and a study of the line’s exploitation scheme to optimize its operation and ensure the use of the investments that will be made.

See Also:  Tesla has collected "too far too quickly"

We are going to start immediately. We have already defined the projects to execute »stressed the president of Adif Pardo, who appealed to the “commitment” of the private agents involved for the project to be successful, for which collaboration protocols will be promoted.

The bulk of the investments will be used to resolve the limitations of gauges in tunnels, overpasses or stations for the circulation of this type of trains. For it, “Very complex works” will have to be carried out, which will entail traffic restrictions. These actions will try to reach a consensus with the sector to minimize the conditions.

With this conference, entitled ‘Aragonese Logistics Strategy. Zaragoza-Algeciras railway motorway ‘, the launch of the project and the institutional consensus that exists, both at the regional and state level, for its implementation has been verified. The event, held in the Crown room of the Pigantelli building, was inaugurated as host by ehe president of Aragon, Javier Lambán, and had the intervention of the Minister of Development of the Junta de Andalucía, Marifrán Carazo, the Minister of Economy of the DGA, Marta Gastón, and the president of the Port Authority of Algeciras, Gerardo Landaluce. The mayors of Zaragoza and of the aforementioned Cadiz town, Jorge Azcón and José Ignacio Landaluce, respectively, also attended.

The initiative was born in 2017 with the signing of an agreement between Aragon and Andalusia that defined a joint strategy to demand the necessary investments from the central government to allow the development and start-up of the ferroutage in the central railway corridor (Algeciras-Antequera-Madrid-Zaragoza and Tarragona). Four years later, this long-awaited infrastructure is closer to materializing.

See Also:  Isernhagen: Möbelhaus Höffner is allowed to use helicopter landing pad on the roof

This was confirmed by Lambán himself, who considered that the project “begins to take shape and see itself as a promising reality” having assumed it as a strategic project of the country by the Ministry of Transport and Adif, an entity which it considered a “necessary accomplice” for the most emblematic projects of the autonomous community.

The Aragonese president also opted for lto co-governance in State policies, «such as communications», to achieve “a successful national project.” After the experience of the pandemic, he added, the country is prepared to overcome “any challenge” in relation to its future.

For his part, Minister Ábalos remarked that the Zaragoza-Algeciras railway corridor is “a priority” for the Government of Spain, which is why work is being done for its development in the “medium term”, as is the bet on the Aragonese capital as “the great inland port of Spain”. “I share with Aragon an initiative that reinforces its leadership capacity in the sustainable transport of goods in Spain,” he stressed.

Ábalos also emphasized the “enormous potential” of this rail motorway, “due to its very length for a profitable operation, with a stable and quality service.” For it, recognized that it is necessary to close the “technical aspects” that are “decisive” to achieve the success of the investment.n, a “difficult question to face.”

In this sense, he recalled that already 70 million euros have been invested in improving the performance of the line, a task for which there is another 64 million euros earmarked in this year’s budgets.

See Also:  Mozambique: after a disputed poll, challenges of all kinds

The minister also specified that an informative study is being carried out to analyze the standard gauge connection alternatives to the Plaza logistics platform. “We want – he concluded – to continue helping Zaragoza to consolidate its strategic position as a logistics benchmark south of Europe and the most modern intermodal transport node ”.