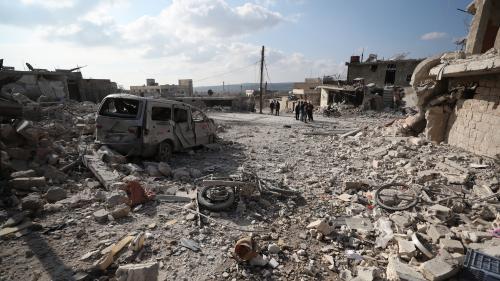 The province of Idleb, which still escapes the regime of Bashar Al-Assad, is dominated by jihadists.

The violence continues in Syria. At least 12 civilians, including six children, were killed in air raids by the regime or its Russian ally on jihadist-dominated Idleb province on Saturday (December 7th), the Syrian Observatory for Human Rights reported. (OSDH).

A truce was announced at the end of August by Moscow for the province of Idleb in north-west Syria, but the Syrian Observatory for Human Rights (OSDH) continues to report sporadic fighting and shelling that has killed dozens of people.

On Saturday, four civilians, including one child, were killed by Russian raids on the village of Al-Bara, according to the Observatory. In a nearby village, two civilians including one child died in Russian raids, according to the OSDH. The victims also include five civilians, including three children, who died in Syrian air strikes on a village in southern Idleb, OSHR said, adding that another child was killed in a raid on the regime. in another village in the southeast of the province.

The province of Idleb is dominated by the jihadists of the Hayat group Tahrir al-Sham (HTS), former Syrian branch of al-Qaeda. This region, and adjacent areas of the provinces of Aleppo, Hama and Latakia, still largely escape the regime of Bashar al-Assad.

Related topics
Your opinion is valuable.

Help us improve our site by answering our questionnaire.

I give my opinion

France Télévisions processes your personal data in order to improve franceinfo products and to answer more precisely your needs. To exercise your rights on your data, contact us. To learn more, click here.

Hong Kong, as the financial capital of Asia drowns