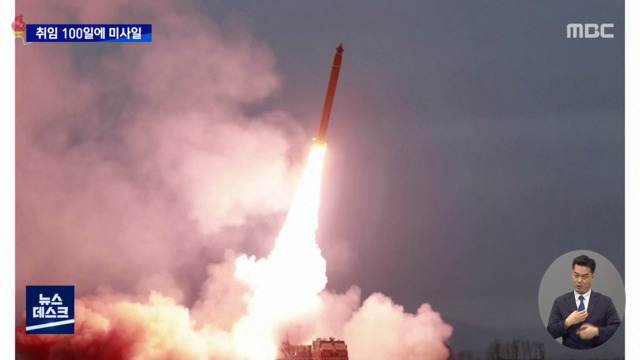 Coincidentally, the missile launch took place on the 100th day after the inauguration of President Yun Seok-yeol, and some are also analyzing that it was an indirect response to the ‘bold initiative’ proposed by President Yoon two days ago, urging North Korea to denuclearize.

Two missiles were fired in succession, but their flight range and speed are still being analyzed.

Cruise missiles use jet engines as power, and although they have high accuracy in hitting targets, they have lower destructive power and slower speed than ballistic missiles, so they are not subject to UN sanctions.

However, the possibility of carrying a miniaturized nuclear warhead is being raised.

It seems that there have been about 10 test launches since 2020.

This launch is the first missile provocation in more than two months since the launch of eight short-range ballistic missiles in June.

In particular, it was held in time for the press conference on the 100th day of the inauguration of President Yoon Seok-yeol.

There is also an analysis that it is a reaction to President Yun’s ‘bold initiative’ for the denuclearization of North Korea proposed on Liberation Day last year.

In response to our proposal to provide economic support in various fields, such as food and infrastructure, if we show our will for denuclearization, we expressed our intentions with missile provocations prior to evaluation through the state-run media.

“(North Korea) analyzes that it contains these messages: ‘I do not trust the Yun Seok-Yeol administration’s policy toward North Korea’ and ‘We will take strong and powerful responses in the future’.”

Chairman Kim Jong-un issued a warning directly to the Yun Seok-yeol government last month, and if the South Korea-US joint exercises start in earnest from next week, the possibility cannot be ruled out that North Korea’s additional provocations, such as long-range ballistic missile launches, will follow.

This is MBC News Hong Eui-pyo.

1st public appearance with Jada since the Oscars!