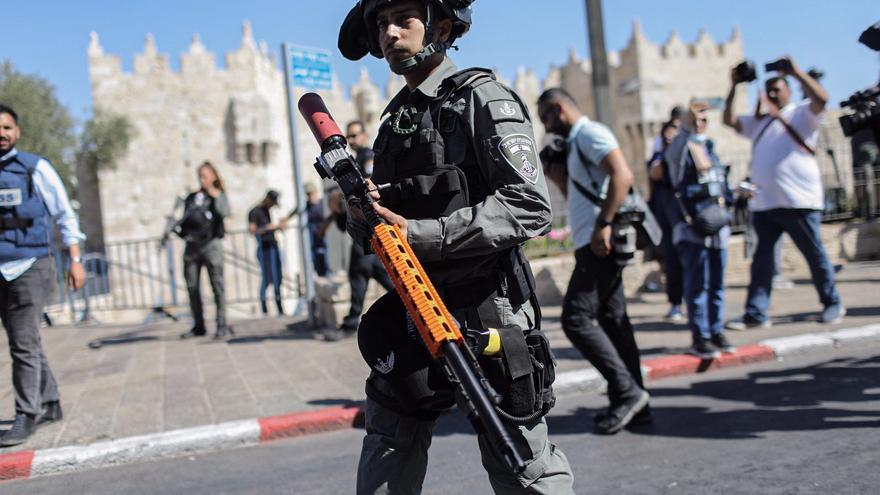 A member of the Israeli security forces takes position during clashes near the Damascus Gate of the Old City of Jerusalem.
Ilia Yefimovich / dpa

Two Palestinians have died this thursday for shooting by Israeli forces in different incidents that occurred in the Old City of Jerusalem and in the city of Jenin, in the West Bank. The Israel Police have reported that a Palestinian woman has been shot to death on Thursday morning when I was trying to stab officers in the Old City of Jerusalem, according to local media ‘The Times of Israel’.

According to the body, the incident occurred around 6.30 am (local time) at one of the entrances that leads to the Temple Mount – or the Esplanade of the Mosques, for Muslims – when the woman approached at the officers with a knife and tried to injure them, so the police officers opened fire on her. The Police have indicated that the health services have come to the place to treat her, but have finally confirmed the death. The woman, in her 30s, would come from the outskirts of the city of Jenin, in the north of the West Bank, according to the Israeli press.

Precisely, in the village of Burqin, in Jenin, another incident occurred this Thursday morning in which a young Palestinian has died and two others have been injured. According to witnesses to the official Palestinian agency Wafa, the Israeli army has intervened in a home in a “covert” manner and shot the young man, identified as Alaa Nasser Muhamad Zayud, 22, who has finally died. In addition, two other people have been injured in the framework of this event and have been transferred to hospitals to be treated, while another couple of individuals have been arrested by the Israeli authorities, according to the mayor of Burqin to the aforementioned Palestinian agency. .