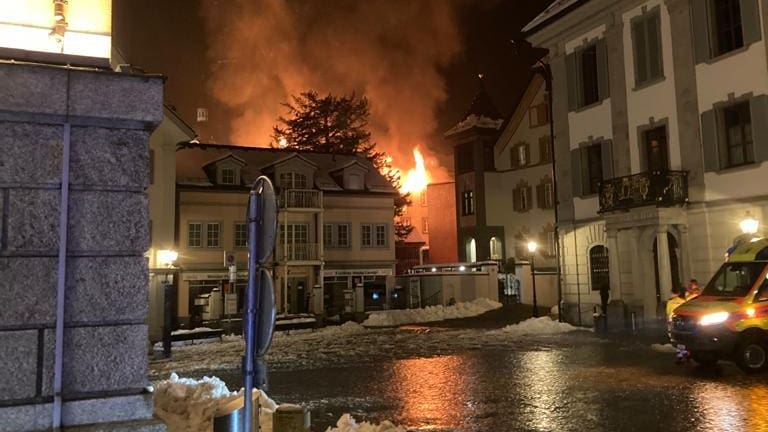 Blazing flames rise into the night sky over Altdorf. An apartment building in the center of the canton capital is on fire, as a BLICK reader reports.

The fire brigade is on site with a large contingent and is trying to put out the full fire, confirms Reto Pfister of the Uri cantonal police to VIEW. «The object is particularly delicate. There are many houses close together. The fire brigade is now trying to prevent flames from spilling over to neighboring houses. ” The report was received on Thursday shortly after 8 p.m., said Pfister.

There are three apartments in the building. All residents are now outside. A 40-year-old woman and a 65-year-old man suffered moderate injuries and had to be taken to the hospital by the ambulance service. The emergency services assumed in the evening that there were no other people in the building.

The fire brigade, supported by the chemical brigade, was on duty in the evening with a large number. On the one hand, it was about putting out the fire and, on the other hand, preventing the flames from spreading to other buildings in the densely built-up core of the Uri canton capital, it said. Because of the heavy smoke development, the police recommended that the windows and doors in the Altdorf area be kept closed.

Rega was also on site, the emergency services of the Uri Cantonal Hospital and the Uri Environmental Protection and Wastewater Office. The traffic was largely diverted around the center of Altdorf. According to the police, the property damage is great and cannot yet be quantified. (man)