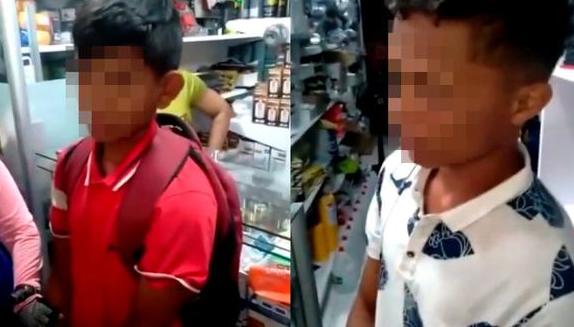 The UN and Colombian authorities investigate the murder from two Venezuelan teenagers from 12 and 18 years, what were shots after being singled out rob a warehouse in a violent coca-growing region in the northeast of the country, according to various sources disclosed this Monday.

In videos and photos disseminated in social networks, teenagers are seen with distressed air, the hands tieds forward with duct tape while an off-camera person accuses them of “Thieves.”

“Unfortunately they are very young boysWe don’t want to see you there tomorrow thrown away in some edge of the highways ”, says the anonymous voice.

The bodies of the teenagers were later found in a rural area, apparently shot and with your hands still tied up.

A cardboard with the word “Thieves” andhandwritten rested on the body of the smaller, lying face down with a red backpack.

Jaime Marthey, ombudsman of the North Department of Santander where the homicides occurred, said the youths were surprised stealing clothes in Tibú, a border town with Venezuela.

The merchants tied, but then “they were snatched (…) for illegal armed group that took them to an unknown destination where later turned up dead”Added Marthey in an interview with Blu Radio.

According to the defender, the youths were migrants who fled from the economic crisis from Venezuela.

The police colonel, Carlos Martínez, blamed the dissidents of the ex-guerrilla from the FARC (Revolutionary Armed Forces of Colombia) that departed from the peace agreement signed in 2016 and assured that investigations are being carried out to clarify the crime.

The UN Office for Human Rights in Colombia rejected the murder of under 12 years old and asked the authorities to “investigate these facts.”

See: Harsh criticism of US police for dragging paraplegic by hair

The troubled municipality of Tibú concentrates the largest amount of Colombian drug cropsa with more than 19,000 hectares planted with coca leaves, according to the UN.

Dissidents of the former guerrilla of the FARC, rebels of the National Liberation Army (ELN) and drug traffickers from paramilitary origin they dispute the territory with blood and fire to control the coca business.

Non-governmental organizations such as the international Human Rights Watch have denounced that thousands of Venezuelan migrants They arrive in the region due to the precarious control of border crossings and end up trapped in the Colombian armed conflict.