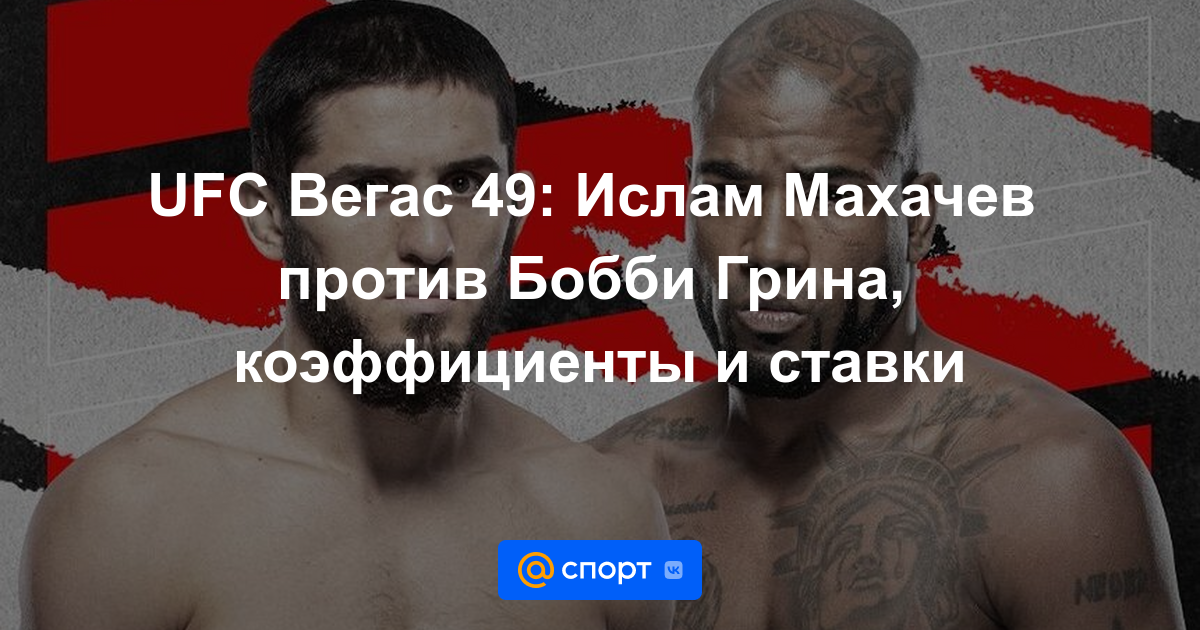 Forecast: The fight will last less than 2.5 rounds with odds of 1.86 at Winline bookmaker.

Makhachev’s opponent was supposed to be Benil Dariush, the fight with whom was assessed as a “candidate”. The winner could get a chance to fight for the title in the next fight. After Benil dropped out due to injury, the UFC struggled to find a replacement – Green agreed to share the octagon with Makhachev just 10 days before the start of the tournament. Moreover, according to Makhachev, all top lightweights refused a similar offer.

At the moment, Bobby does not occupy a position in the lightweight rankings, despite the fact that he had 42 professional fights in MMA. According to this indicator, only one fighter from the top 15 division can compare with him – ex-champion Rafael dos Anjos. It is generally accepted that Green, on the eve of the fight with Makhachev, is in a more advantageous position, since he has nothing to lose – neither candidate status, nor a place in the title race.

How can Green win?

Former UFC fighters Chael Sonnen and Michael Bisping draw attention to the fact that Green’s team focuses on protection from transfers to the ground and uses eminent fighters in training camp to develop this aspect. On the other hand, Islam Makhachev throughout his career showed total dominance in grappling, control on the ground. It is hard to imagine that Green will be the first of the fighters to oppose him when Islam decides to transfer the fight to the floor of the octagon.

Another ex-fighter and analyst Dan Hardy points out that the only defeat in Makhachev’s track record (a knockout in a fight with Adriano Martins) became the motivation for his further winning streak of 9 fights and influenced the way he worked in the stand. None of the following opponents managed to provoke Islam into an unprepared attack and force him to open up for critical damage.

Provocation is Bobby Green’s signature style of behavior in the octagon. Insults against opponents and an imposingly relaxed stance have more than once played in favor of the American. Due to the speed of reaction and lightning-fast blows, Bobby repeatedly hit and took in his favor entire segments of previous fights in the rack. Will Green be able to use such tactics in the fight against Islam?

The odds for an American victory by knockout are 16.0. You need to understand that during the entire current winning streak, Makhachev did not lose concentration in any of the situations and did not look shocked. Therefore, this alignment seems absolutely fantastic.

How can Makhachev win?

Islam in training camp prepared for an opponent with a completely different set of key skills. Dariush has a strong punch, while being a black belt in jiu-jitsu and is no less dangerous in the stalls than in the stand. Green stands out for his footwork and emphasis on striking, especially boxing, he is a clear counter-puncher.

It’s safe to say that the Russian is not going to somehow rebuild tactics for the fight with Bobby Green, as he is not inferior to any of the best lightweights in the world in terms of punching technique and the ability to combine punching with wrestling. The winning scenario for Makhachev is pressure, control of the octagon in the standing position, takedown, control and damage on the ground, and then a painful or choke hold. The odds for this outcome are 1.79.

To assess the key moments of the tactical and technical arsenal of these athletes and the possible pattern of the battle, we asked several questions to the expert.

Expert forecast: Islam Makhachev’s victory in the second round with odds of 4.30 at Winline bookmaker.

Judging by Bobby Green’s previous performances in the UFC, he was often transferred to the ground floor by fighters inferior to Makhachev in wrestling skills. Given how good Islam is, Bobby has no chance of stopping the takedown. Makhachev is one of the best examples of the effectiveness of Abdulmanap Nurmagomedov’s school, he perfectly performs takedowns both from the clinch and from a long distance. At the same time, neither Bobby Green’s boxing, nor the constant change of racks in his performance will affect the success of takedowns. Makhachev, if desired, simply reorganize and successfully pass in one leg. Green is a veteran mixed martial artist who came to MMA from wrestling. Due to experience, he has a chance to hold out until the end of the second, the beginning of the third round. But, most likely, by this moment, Makhachev will be able to knock him over to the floor, wear him out on the ground and complete the fight with a submission. It can be as a choke from behind when Green tries to get to his feet, or an armbar (elbow lever) from the mount.

Forecast: Tsarukyan’s victory by decision of the judges with odds of 2.60.

Russian fighter of Armenian origin Arman Tsarukyan made his debut in the UFC with a fight against Islam Makhachev and already then impressed the audience with a bright performance, despite the loss by decision of the judges. After that, Tsarukyan won 4 victories, the last of which was by knockout.

Spanish fighter Yoel Alvarez also had 5 fights in the world’s main promotion, and his debut also ended in defeat by the verdict of the judges. The next 4 fights brought him 4 early victories, riveting the audience’s interest and the attention of experts to his performances. 16 victories in his professional career “Phenomenon” won by painful and suffocating techniques. The Spaniard’s size and unorthodox striking technique can be problematic early in the fight, but once Tsarukyan is able to impose his pace, his aggressive fighting and heavy punching streaks should outweigh what Alvarez is up against.

The death of the Egyptian actress, Gala Fahmy, at the age of 59, after years of occultation

Why is the death toll so high from Omicron, even though it causes a milder disease than Delta?