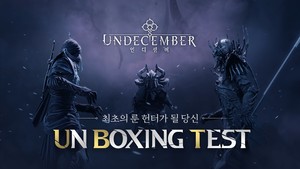 [이코노믹리뷰=민단비 기자] After launching in 2017, Line Games, which has not produced any major box office successes, has come up with an ambitious game. On the 13th, the company started the unboxing test (UBT) of the mobile/PC multi-platform hack and slash ‘Undecemed’, which is scheduled to be published on the 13th. UBT will be held for a week until the 19th.

Hack and Slash refers to a genre that focuses on the battle against a multitude of enemies that are constantly coming in. One of the fun elements of this genre is that you can play a game full of tension with monsters that rush to the characters like crazy. Representative hack and slash games include Blizzard Entertainment’s ‘Diablo 2′ and Kakao Games’ ‘Path of Exile’.

The difference between Undisembark and other hack-and-slash games lies in the class (profession) and skill system. Unlike other games where you have to choose a class before you can play, Undisembark doesn’t have a class. Therefore, all skills can be used by changing weapons such as swords, bows, and staffs to suit only the skill.

However, there is a level point system called ‘Zodiac’, so you can feel the class being decided while nurturing. Users can strengthen the character’s stats divided into strength, agility, and intelligence through the zodiac, and accordingly, there are restrictions on the skill runes that can be equipped.

The differentiated skill system also stands out. It is possible to link skills called ‘runes’. The ‘Rune Cast’ is a large honeycomb-shaped plate that can be equipped with runes. It consists of a total of 30 spaces, and you can equip skill runes and link runes in each space.

A skill rune is a rune that can use various skills such as melee, ranged, and spell, and a link rune is a secondary rune that literally connects skill runes to give additional effects. Link runes have no effect unless they are linked to skill runes.

In order for a skill rune and a link rune to be linked, two conditions must be met. The color and tag of the skill rune and the link rune must match. Each rune is divided into four colors: red, green, blue, and white. Also tagged. For example, the rune ‘Explosive Arrow’ has the tags Attack, Area, Strike, Physical, Fire, Projectile, and Bow.

Concerned about the phenomenon that only some powerful skill combinations are used, Neiss Games CEO In-young Koo said, “We are preparing by balancing the skills as much as possible to avoid a structure that chooses only a specific strong build. said.

Line Games also picked items after the skill system as differentiated content. CEO Koo said, “Items are what we are looking at as a major axis along with the skill system.

Among users who have experienced the test, there are quite a few reactions that the feeling of hitting is disappointing. Some users left reviews on the official community, such as “The most important hit in Hack and Slash, but it’s a disappointing level”, “It’s at the level of a mobile game, and I don’t think it’s played on PC.”

There are a lot of voices saying that it was well made, and while evaluations are divided, the profit structure (BM) is also expected to be the key to the box office success. Analysts say that the reason people are enthusiastic about the recently released ‘Diablo 2 Resurrection’ is to feel the memories of playing Diablo in the past, but it is because it gives satisfaction beyond the purchase price of 50,000 won.

In UBT, the BM was not disclosed. CEO Koo emphasized, “We are continuously discussing BM. What I can say for sure is that we do not consider probability-type items, and we do not intend to include anything that could harm the game.”

On the other hand, in addition to solo content, Undisembark also includes user-to-user (PvP) and cooperative content. Line Games unveiled the PvP content ‘Crusade of Glory’ and ‘Boss Raid’ through UBT, where users can defeat bosses through cooperative play. Up to 15 users can form a ‘guild’ and play the 8v8 ‘guild battlefield’ where other guilds can compete against each other.