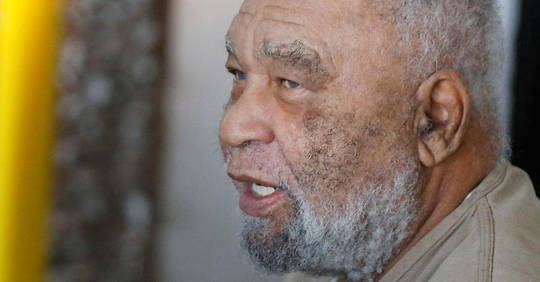 We line up at the Ector County Jail in Texas to visit Samuel Little. This 78-year-old black prisoner, who moves in a wheelchair, has received in recent months the visit of a dozen investigators from across the country. They arrive with unsolved homicide files, “cold cases”, and Samuel Little tells them how he killed these long forgotten women. So far, he has confessed to over 90 crimes spanning nearly half a century across the United States. If so far the police have only been able to verify about 30 of them, they think Samuel Little is telling the truth. Indeed, the man gives details that only the murderer could know. And to the surprise of the investigators, he kept a very good memory of the details, the map of the localities, the faces …

If he’s sincere, Ector County District Attorney Bobby Bland summed up in a statement, “Samuel Little will be confirmed as one or perhaps the most significant serial killer in US history.” . Far ahead of Gary Ridgway, nicknamed “The Green River Assassin,” who killed 49 women between 1982 and 1984 in Washington State; Ted Bundy, who confessed to 30 assassinations from 1974 to 1978; or John Wayne Gacy, murderer of at least 33 young boys in the 1970s.

Among the murders Samuel Little detailed to the inspectors who visited him is that of Julia Critchfield, 36, who was strangled, whose body was found naked in a Mississippi wood in January 1978. This mother of four children, who loved to sing and dance, apparently met Samuel Little at a bar. Four years later, in Georgia, the killer allegedly attacked 18-year-old Fredonia Smith, who had gone out to buy ice cream. His body was discovered in a garden. Died from strangulation. A month later, 20-year-old Rosie Hill was found strangled dead near a pigsty in Florida.

In January 1996, 24-year-old Melissa Thomas was found strangled in a Louisiana cemetery near a walnut tree. She was a cousin of the sheriff’s wife. When the latter received a phone call from Texas telling him that a certain Samuel Little claimed to be the murderer, he dispatched an investigator to the scene. Samuel Little told him about the bars in town, where the cemetery was located, and told him that he had passed Melissa Thomas on the street and that they had gone to the cemetery to take drugs. A little later, when they found themselves in the back seat of the car to have sex, Little started to stroke her neck, which worried the young woman. According to him, she asked him: “Why don’t you stop touching my neck? Are you a serial murderer? Which would have pissed him off and so he would have strangled her.

“He ridiculed the American legal system”

Little is known about Samuel Little’s biography. He was born in Georgia in 1940 and raised by his grandmother. His mother, he says, was a prostitute, and he led a homeless vagrant life. He was arrested dozens of times for pickpocketing, burglaries, armed robberies, drug use … This former boxer of 1.90 m, who weighed nearly 100 kilos, targeted single women, drug addicts, prostitutes, often black or Hispanic, whom he thought no one would notice was missing and the police wouldn’t go out of their way to do much. He hit them – he punched one victim so hard in the abdomen that it broke her spine – then strangled them while masturbating. In some cases, he raped them.

The most astounding thing is that Samuel Little has been arrested on several occasions for murder. In 1976, a drugged prostitute managed to escape and called for help, claiming that he had tried to strangle her, beat her and raped her. The police arrested him, and found the woman’s clothes and jewelry in her car. However, he only served three months in prison, probably because his heroin addict victim did not appear to be a credible witness.

In 1982, Melinda LaPree, a prostitute from Mississippi, disappeared after being last seen in Samuel Little’s car. A month later, his body is discovered and Little is arrested. Two other prostitutes accuse him of having beaten them. But he is not charged, again due to the lack of credibility of his accusers.

Two years later, in Florida, he was acquitted of the murder, in 1982, of Patricia Ann Mount, a young mentally handicapped girl, when one of his hair was found on the body. A few months later, he returns to jail for an attempted murder of two prostitutes he kidnapped a few weeks apart and took to the same wasteland in San Diego. Samuel Little is arrested with one of them. But the jury can not agree on his guilt. He nevertheless pleaded guilty to other charges and was sentenced to four years in prison. However, it comes out after two and a half years. “I think he ridiculed the American legal system,” commented on Los Angeles Times Beth Silverman, the Los Angeles County Assistant District Attorney.

It was not until 2012 that two inspectors who investigated the murder of three women in Los Angeles, between 1987 and 1989, trace his trail using his DNA. Samuel Little is arrested at a Kentucky homeless shelter and, after a trial, he is this time sentenced to life in prison. In court, he proclaims his innocence and insults the families of the victims.

The police suspect that he has other crimes to his credit. But Samuel Little refuses to speak. Last summer, his DNA was linked to another murder in Texas in 1994. James Holland, the investigator, came to visit him in his California prison for details. He manages to gain her trust, and Samuel Little sits down to table, without showing the slightest remorse. Since then, he has confessed to more than 90 homicides that he claims to have committed between 1970 and 2005. In Los Angeles alone, he claims to have killed 20 women in the 1980s.

Why confess now? His last appeal was rejected, so he has no hope. Then, the former colossus, who suffers from heart problems and diabetes, is only a shadow of himself and would like to stay in the Texas prison where he was transferred, less violent than the one in Los Angeles whose he was transferred. Finally, he seems to appreciate the attention that is suddenly shown to him. During questioning, he explained to the Florida investigator that he had killed Rosie Hill because “God had put him on Earth for this task.”