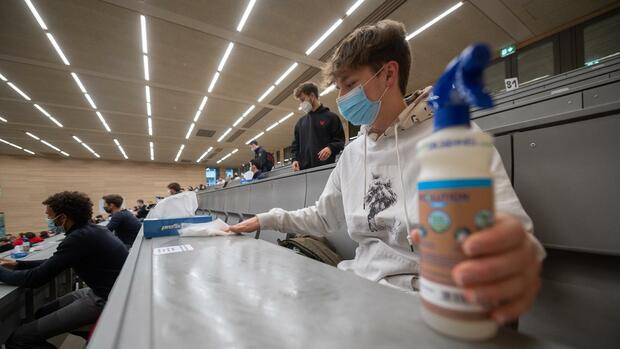 Students at the University of Hohenheim with mouth and nose protection.

Berlin In contrast to the schools, the universities got through the corona crisis surprisingly well with their teaching over the summer. Online studies work far better than distance teaching in schools. However, the universities fear a significant slump in the international contacts that are so essential for science: Two out of three universities expect a decline in their global cooperation. This is shown by the new university barometer of the Stifterverband, which the Handelsblatt has received.

The international students also stayed away en masse because they couldn’t leave the country due to the corona. There are still no total figures for the winter semester that has just started, but the first individual reports suggest that large numbers of foreign students will be absent.

The university heads surveyed generally see a lot of catching up to do when it comes to preparing their students for the digital future: 72 percent state that they have developed new courses in the past three years to impart digital skills not only in IT courses, but also across disciplines . Nevertheless, 85 percent see a need for further adaptation for students in technical subjects – in health sciences the figure is as high as 93 percent.

In retrospect, nine out of ten universities rated the digital Corona summer semester 2020 as good. Initial fears that a series of events would have to be canceled and that the entire semester might “not count” turned out to be unfounded. A majority of 56 percent of universities even rated political support as good. Eight out of ten rectors say their autonomy is large enough to be able to make the necessary decisions in the pandemic. Unlike schools, most universities and technical colleges in Germany meanwhile have global budgets that they can use independently. They are also usually autonomous in personnel matters.

The overall mood at German universities, at least before the outbreak of the corona crisis, was better than it had been since 2011. On a scale from minus 100 to plus 100, the value was 30 points. However, there are enormous differences: the universities that benefit from the federal government’s billion-dollar excellence strategy get almost 49 points – the others only 17. The differences do not only relate to the research promoted by the excellence strategy. The massive funding apparently also spurs teaching: Here, the profiteers rate their competitiveness significantly higher. This is probably due to the fact that with the extra research funds from the federal government, they gain many excellent scientists, who are of course also attractive to the students.

The university barometer is compiled annually by the Stifterverband and the Heinz Nixdorf Foundation. Follow-up surveys were also made this year due to the corona crisis.