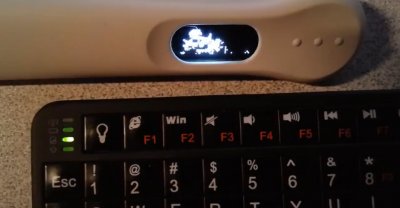 FPS still cult, Doom has been officially released on many consoles, but unofficial versions number in the hundreds since the source code was shared in 1997. The shooting game ofid Software runs on a bunch of devices, even on the Touch Bar of Macbook Pro, but a certain Foone Turing went even further.

Yesterday I had a lot of retweets and reddit posts and such for playing Doom on a pregnancy test.
But as I explained then, it wasn’t really PLAYING on a pregnancy test, it was just a video being played back, not an interactive game.

The latter got his hands on an electronic pregnancy test, another internet user having discovered that the device only reads the result on the paper (the famous lines) to transcribe it on a digital screen. Foone Turing therefore wanted to verify this deception on his side, it is indeed the case, but he especially wanted to make the most of the capabilities of the device, which has an 8-bit microcontroller, more powerful than the one embedded in the first computer ofIBM, powered by a small button cell battery. The user therefore ran a few videos on the pregnancy test screen, a monochrome model displaying an image in 128×32 pixels, including the clip Never Gonna Give You Up by Rick Astley and gameplay of Doom.

But then he had the idea to tweak the pregnancy test to “play” at Doom, and he succeeded! As you can see from the video above, Foone Turing managed to display Doom on a pregnancy test, but the picture is obviously very crude and it takes imagination to recognize environments and enemies. The achievement is impressive and, yes, it also works with Skyrim, which is definitely also everywhere.

A fun result, but if you really want to enjoy Doom, you might as well turn to the PS4, Xbox One, Switch, PC, iOS and Android versions that recently received an update, where to DOOM Eternal, sold € 33.84 on Amazon.fr.

At 46 years old, Zaskia Sungkar’s father shows off his intimacy with his beautiful wife