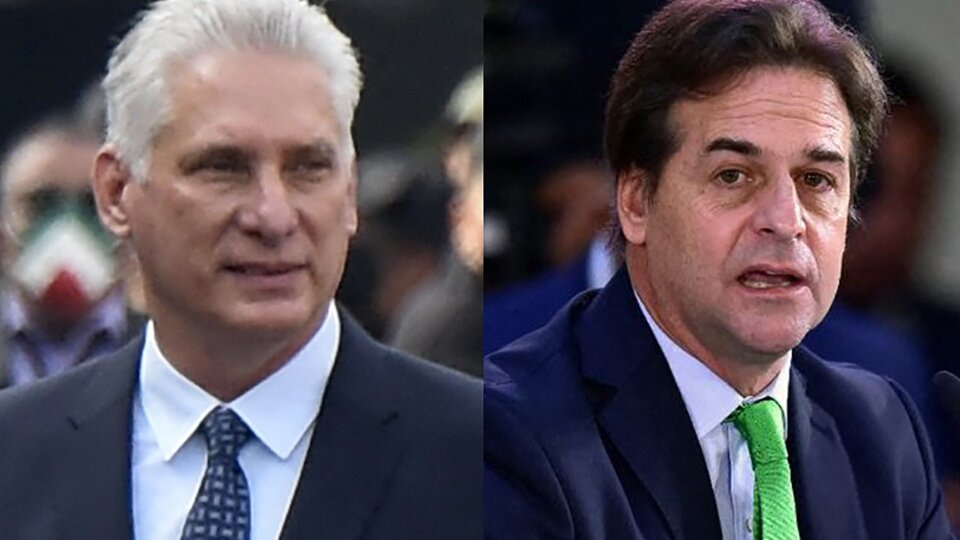 The Uruguayan community residing in Cuba rejected the “interference expressions” Regarding the island of the president of Uruguay, Luis Lacalle Pou, during the sixth summit of the Community of Latin American and Caribbean States (Celac) held in Mexico. Saturday Lacalle Pou had criticized the governments of Cuba, Nicaragua and Venezuela for “not respecting human rights”. His words prompted a harsh response from the President of Cuba, Miguel Diaz-Canel, who awarded him an “ignorance of reality” and recommended that he “listen to his people” after the successful opposition campaign to convene a referendum in order to remove items from the Urgent Consideration Law (LUC), regressive in economic and social terms.

“We enjoy rights that many would like to have”

“The rude and false accusations exposed by him there shame us,” underlined the note of Uruguayan residents in Cuba, in relation to the words of Lacalle Pou in Mexico. They criticized the president’s lack of respect “towards a people and its government that has welcomed us as children” and added: “EnjoyWe have rights that many human beings in the world would like to have“.

The statement released on the Facebook account of the former Uruguayan ambassador to Cuba, Eduardo Lorier, acknowledges that Lacalle Pou “did not speak on behalf of the Uruguayan people, who are friends and brothers of the Cuban people” and concludes with a message to Cuba of “our permanent respect and gratitude.”

Lacalle Pou’s words also had an echo in the Uruguayan opposition. The deputy of the Broad Front, Daniel Caggiani, said that “the president is doing very wrong to confuse his personal or partisan position with the position of our country in a regional forum such as the Celac 2021 Summit.” The also legislator Bettiana Diaz he tweeted that “it must be a lie that President Lacalle Pou is showing his face to teach respect for Human Rights at the Celac Summit, while this is happening in Uruguayan prisons.” Díaz referred to the case of a detainee who was held by other inmates for 40 days in a cell, naked, subjected to torture and in a state of malnutrition.

The crosses during the summit

The frictions in the Celac meeting began when the Paraguayan president, Mario Abdo Benítez, affirmed that he does not recognize Nicolás Maduro as president of Venezuela. “I say to the president of Paraguay: put the date, the place and the hour for a debate on democracy in Paraguay, Venezuela and Latin America! Put you, President Lacalle, the date and the place!”, He replied Mature before the plenary session.

In tune with his Paraguayan counterpart, Lacalle Pou said that participating in the summit did not mean being “complacent” with countries where “there is no full democracy, the repressive apparatus is used to silence protests, when opponents are imprisoned. “In his speech during the sixth regional summit, the right-wing leader said: “We seriously see what happens in Cuba, Nicaragua and Venezuela”.

The President of Cuba, Miguel Diaz-Canel, he assured that Lacalle Pou’s word “denotes his ignorance of reality.” What’s more He advised his Uruguayan counterpart to “listen to his people, who collected more than 700 thousand signatures against the LUC” that Lacalle Pou “imposed and changed the conditions to adjust fuel prices, eviction, reduce the role of public companies and modify the criminal process.”

For Díaz-Canel, it is “a neoliberal package or package”. “With neoliberalism what has multiplied is instability, speculation, foreign debt, more frequent financial crises, poverty, inequality … and a gulf between the affluent north and the dispossessed south“added the first secretary of the Cuban Communist Party.

“Fortunately, in my country, the opposition has democratic resources to complain. That is the great difference with the Cuban regime,” Lacalle Pou replied when exercising his right to reply, reading a fragment of the song “Patria y vida”, an anthem of the historic July protests in Cuba. “It seems that President Lacalle has very bad taste in music. That song is a lie and a construction among some artists against the Cuban Revolution, “was Díaz-Canel’s lapidary response.