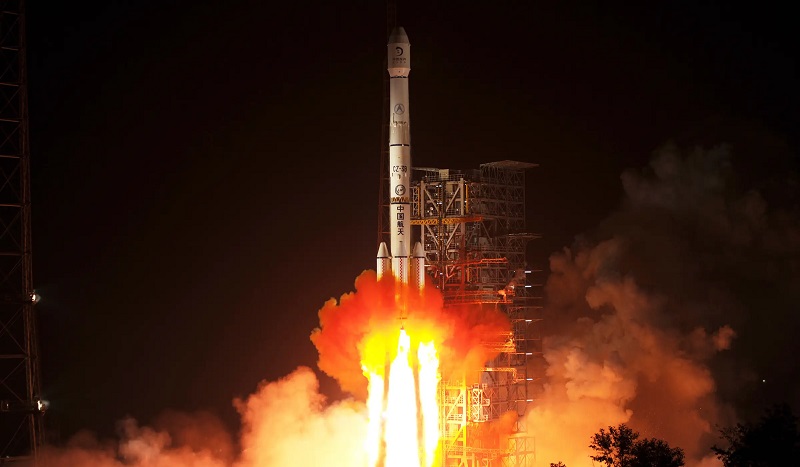 During the Cold War, the Soviet Union had developed a system of “fractional orbital bombardment” [OGCh pour Orbital’noi Golovnoi Chasti] which, based in particular on a modified RS-36 missile, consisted of deploying a nuclear weapon in a low orbit in order to take NORAD from the rear [Commandement de la Défense aérospatiale de l’Amérique du Nord, ndlr], whose radars were responsible for detecting any missiles following a direct path passing through the North Pole.

Subsequently, the development of an advanced warning device by the United States got the better of this “fractional orbital bombardment system” … And the Soviet Union officially renounced it within the framework of its SALT 2 disarmament agreements, signed in 1983.

However, in March 2018, during a presentation of the new Russian “invisible” weapons, the head of the Kremlin, Vladimir Putin, hinted that Russia had recovered such a capacity with the intercontinental ballistic missile RS-28 Sarmat. [code Otan : SS-X-30], whose operation would be similar to OGCh. In any case, such a weapon would be compatible with the Outer Space Treaty, which prohibits the placing of nuclear weapons into orbit.

Would China have followed the same path? This is indeed what Frank Kendall, the secretary of the US Air Force, suspects. And he opened it up during a speech at the annual “Air, Space, & Cyber” conference on September 20, according to reports. through Air Force Magazine.

Thus, according to him, several elements show that Beijing is seeking to acquire a so-called “first strike” capability, with the rapid increase in its nuclear arsenal, the construction of several ballistic missile silos and the development ” hypersonic weapons, a full range of anti-satellite systems As well as cyber weapons and electronic warfare means.

China has ” intelligently invested in prohibition and denial of access systems designed to neutralize the projection of American power “, with ” precision weapons with constantly increasing range and increasing number Frank Kendall noted. And that would therefore include a capacity of ” strike from space ».

« There is a potential for weapons to be launched from space under this old Cold War concept called the Fractional Orbital Bombardment System. So said Mr. Kendall. ” If you use this type of approach, you no longer have to use a traditional intercontinental ballistic missile trajectory. It is a way to thwart early warning devices and missile defense systems », He developed.

« Our strategic competitors have studied the way we fight and they have taken asymmetric steps to exploit our vulnerabilities and defeat us. We must react urgently, but also taking the time necessary to make wise choices about our future and our investments “, Also argued the secretary of the US Air Force.

In addition, and with regard to anti-satellite systems, Mr. Kendall stressed that Beijing has already deployed the satellite Shijian-17, which, according to US Space Command, could be “used in a future system” intended to capture other spacecraft in orbit using robotic arms.

This system would thus be sold in addition to the KT missiles. [Kaituozhe] and Dong Neng-3, capable of destroying spacecraft in orbit, as well as laser devices capable of blinding observation satellites. For China, such capabilities would make it possible to neutralize the satellites used by the American forces in order to make them “blind and deaf”.