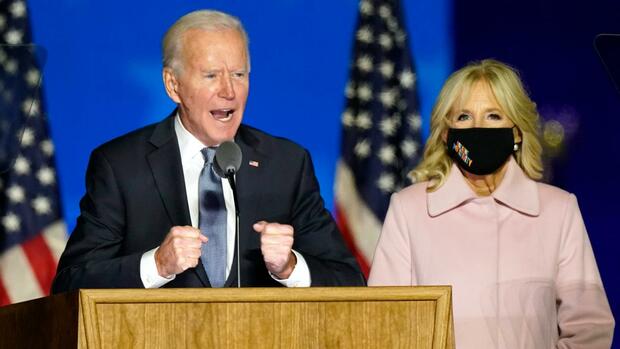 Joe Biden is confident of victory in a first speech.

Washington Just before the first polling stations closed, Donald Trump spoke up on Twitter. “It looks really good for us all over the country!” He wrote in capital letters. And even if “across the country” was not the reality, the Republicans were able to achieve an early and solid success with Florida.

In all polls, the influential swing state was narrowly forecast for Trump and against its challenger Joe Biden; both campaigns had often toured Florida and competed aggressively. It now looks like the president has defended the embattled tropical country.

Election night is far from over, but Trump’s victory in the southeast shows: The race for the White House is not a sure-fire success for Biden, especially if Trump should also get the important states of Georgia and North Carolina. Trump can already win the electoral votes from Ohio, as does the state of Iowa. For this, Joe Biden brings the former Republican stronghold of Arizona.

The night is likely to drag on until a clear tendency for a candidate emerges. “I am full of hope,” said Biden and urged his followers to be patient in a first address.

The more than 100 million early and postal voters must all be counted and verified. You could delay a reliable result and should tend towards Biden.

These elections are not an ordinary vote, they are a referendum on the future of the world’s largest economy in a crisis. The USA had recently approached almost 100,000 people infected with corona every day, and more than 230,000 people died in connection with the virus. At the same time, the effects of the lightning recession in spring paralyzed the country, and there are still ten million jobs missing compared to the beginning of the year.

According to the AP news agency, a large majority of voters are personally affected by the consequences of the pandemic, with four out of ten respondents saying they have experienced financial or health consequences.

The economy and the health system are among the most pressing issues. Trump promises to return the economy to its old vigor with low taxes and minimal intervention. Biden strongly condemns Trump’s crisis management, he calls for a national strategy against the virus and a strengthening of the health system.

The pandemic and political polarization encouraged a record number of people to vote before the actual election day. This indicates a high level of mobilization, which does not necessarily have to be good for Trump. The Republican had also benefited in 2016 from disappointed Democrats staying home and enabling Trump to win razor-sharp victories in former Democratic strongholds.

Trump is currently in the White House with around a hundred guests, including family members, friends, donors and employees. Hundreds of demonstrators gathered in front of the White House that evening. Biden is spending election night in his home in Wilmington, Delaware.