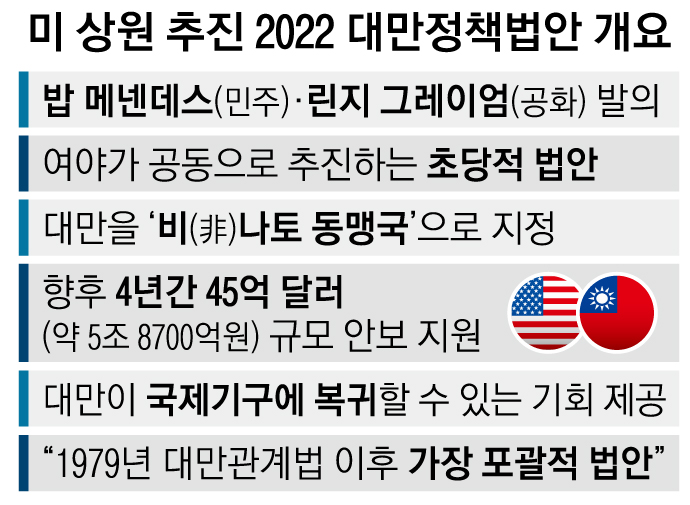 With the US-China conflict reaching its climax after US House Speaker Nancy Pelosi’s visit to Taiwan, the US Congress’s full support for Taiwan has emerged as a new trigger for the clash between the two countries. There are concerns that it will further stimulate Beijing as it intends to upgrade Taiwan to a de facto ally.

According to Politico, a political media outlet on the 7th (local time), the White House is working to amend the US Senate-led ‘2022 Taiwan Policy Bill’ as being too pro-Taiwan. The law, jointly initiated by Senate Foreign Affairs Committee Chairman Bob Menendez, a Democrat, and Republican Rep. Lindsey Graham, would designate Taiwan as a “non-NATO ally” and cost $4.5 billion (about 5.87 trillion won) over the next four years. ) to provide security support at scale. Non-NATO allies are countries that maintain alliances with the United States even though they are not NATO members, such as South Korea and Japan. Chairman Menendez expressed his pride, saying, “This is the most comprehensive redefinition of US policy toward Taiwan since the enactment of the Taiwan Relations Act in 1979.” The bill also contains provisions to provide diplomatic opportunities for Taiwan to participate in multilateral trade agreements with various international organizations.

If the bill is passed by the US Congress, Taiwan will become a de facto ally of the US. China has no choice but to react strongly. Public opinion on the mainland that the US and Taiwan should take military action before they get closer is also likely to rise. The White House is concerned that if the bill goes into effect at a time when tensions between the United States and China have escalated due to Pelosi’s visit to Taiwan, relations between the two countries could be catastrophic.

For this reason, attempts are being made to amend some contents of the bill. However, the media explained that the outcome cannot be optimistic as the hardliners in the parliament are protesting, saying, “Is China that scary?”

Meanwhile, the Chinese military, which announced that it would hold an all-round military exercise around Taiwan from the 4th to the 7th of this month, extended the schedule without notice and continued the exercise on the 8th. Considering that the Chinese military did not mention the timing of the end of the war, it is interpreted that the intention is to maximize the fear of the Taiwanese by maintaining all-round military pressure on Taipei for the time being.