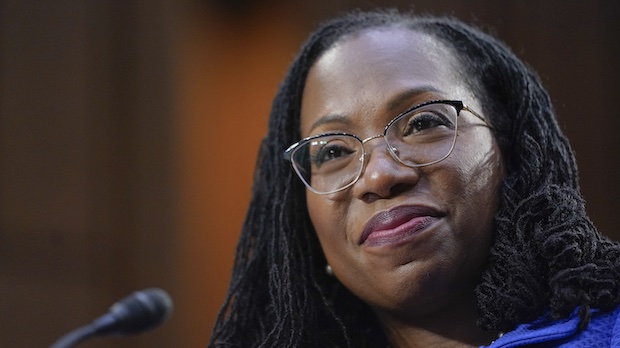 Democrats are fighting with Republicans to elect Justice Ketanji Brown Jackson as the first black woman to the US Supreme Court. A tough fight where there doesn’t seem to be much to gain.

Former US President Trump was lucky, if you want to call it that. To be able to send two new judges to the Supreme Court in the first two years of his term in office and then, shortly before their inglorious end, to cement the conservative majority of judges with a third female judge, that was something of a jackpot for the Republicans. After all, the Supreme Court in the USA has an enormously important position and is considered even more powerful than the German Federal Constitutional Court. Any decision about who will occupy one of the nine Judgment Seats has far-reaching implications for the entire country.

On closer inspection, it was not just luck, but also a result of partisan and judicial policy tactics, that Trump was actually able to fill three judgeships. The first nomination, which the conservative judge Neil Gorsuch finally received from Trump, would actually have fallen to his predecessor Barack Obama if there had been no Republican avoidance maneuvers. Trump’s second nominee, Brett Kavanaugh, came to court because another conservative judge, Anthony Kennedy, voluntarily gave up his seat for a younger successor. In the end, it was the death of Ruth Bader Ginsburg that not only hurt the Democrats because of their personal and professional loss, but also cost them a liberal vote in the already conservative Supreme Court.

Now the Liberal has cleared the way for Stephen Breyer, as Kennedy did before him. In doing so, he has probably thrown his own convictions of an apolitical judiciary overboard, presumably because of the overtly politicized nomination procedures in recent years. That means it’s now the Democrats’ turn. The nomination is naturally important for the party, which is even considering increasing the number of seats in view of the power structure on the court that has been shifted by Trump’s nominations.

Biden’s choice fell on Ketanji Brown Jackson, who was one of the favorites from the start. She has all the characteristics that typically predestine someone for the highest judicial office in the USA: Ivy League qualification, work as a “law clerk” on the Supreme Court (incidentally for the judge Breyer whom she is now to replace) and since last year also a position at the Washington Federal Circuit Court of Appeals known as a springboard to the top.

But the 51-year-old mother of two has also thought outside the box of the typical elite resume. She worked as a public defender and represented an Afghan Guantanamo detainee, later she worked for the lawyer Kenneth Feinberg, who gained notoriety as a special foreman of the US government’s compensation fund for victims of September 11, 2001. Twice she belonged to a so-called Sentencing Commission, which sets guidelines for the punishment in the USA. She not only has the necessary references, but also – especially in the area of ​​criminal law – a wealth of experience that could make her a valuable addition to the court.

But Jackson is more than just highly qualified, her personality also plays a role, because she is a woman and she is black. This combination has never existed in the more than 200-year history of the Supreme Court. Your nomination will also become an identity-political project for the Democrats. Here President Biden can show that he is willing to modernize America. That’s why he had already promised someone with Brown’s profile for the Supreme Court during the election campaign and again shortly after his election.

And yet her nomination is at most superficially about her person. Your background and career are suitable for setting a social sign. However, the “hard facts”, as the Americans say, are not decided in public, but in the deliberation rooms of the Supreme Court on First Street in Washington, DC. It is about how the court will position itself in the future on controversial legal issues such as abortion or gun rights. If you look at Jackson’s personal details from this perspective, you get the impression that, despite her outstanding qualities, she is unlikely to make a difference. Because their confirmation would initially only mean exchanging a liberal vote for a liberal vote. The balance of power in the court cannot be shifted in this way. The fact that it is now up to Democratic President Biden to nominate a successor to Stephen Breyer means preventing another Republican candidate. But even then, the Conservatives still have a 6-to-3 majority on the court.

Added to this is the fact that the current incumbent, Stephen Breyer, is someone whom Washington likes to call – sometimes derogatory, sometimes admiringly – a “consensus builder”: someone who not only knows how to convincingly represent his point of view, but who also occasionally shakes the other side can get on board. During his time at court, he was often the one to reach out to the right from within the liberal camp. And sometimes she got caught. While that doesn’t mean conservative judges regularly change their beliefs, in close voting someone like Breyer can potentially make a difference.

Can Jackson now follow in those footsteps? Or will it possibly even become part of a deeper division in the court, as a kind of reflection of American society? After her nomination, Republican MP Lindsey Graham already pointed out that the “radical left” within the Democrats had once again imposed their will on the president. Jackson is considered across party lines to be an excellent lawyer who, above all, works very precisely and pragmatically. For example, some judges appointed by the Bush presidents publicly speak highly of Jackson, police organizations support their nomination, and even former companions on the Supreme Court who worked for conservative judges only find words of appreciation. For this reason, President Biden also referred to her as a “proven consensus builder” when she was nominated. And even last year Graham, along with two party colleagues, voted for her nomination to the federal appeals court.

And what does Jackson himself say? At her hearing for her current job at the Federal Circuit Court of Appeals last year, she emphasized that her background could be valuable to the court, although her ethnicity would not play a role in the performance of her job. She emphasized this again in the Judiciary Committee. She finds it inappropriate, Jackson said, to bring her personal background to bear on a case. But that doesn’t mean the judge didn’t make some significant decisions against Republicans in her recent career. Last December, for example, she and two colleagues rejected Trump’s request to block the release of records by the White House on the events surrounding the riot at the Washington Capitol on January 6, 2021 to the responsible investigative committee. It also ruled that Donald McGahn, former President Trump’s legal adviser, must comply with a subpoena from a congressional committee investigating Trump’s possible obstruction of Special Counsel Robert Mueller. However, these decisions are probably less the result of Jackson’s partisan political stance than of the absurd events that took place during Trump’s tenure.

Republicans, however, never tire of branding them as part of an identity-fixated postmodern left that has lost its sense of what matters. They also tried to embroil Jackson in a culture war at the Judiciary Committee hearings, with which they obviously want nothing to do. “Can you provide a definition for the word ‘woman’?” asked Marsha Blackburn, Republican Senator from Tennessee. “No,” Jackson replied, probably providing the answer that the conservative camp, which was already anticipating a rage, had feared or even hoped for. Republican Senator Ted Cruz from Texas even asked the judge if she agreed that babies are racist – a misleading allusion to a children’s book dealing with the connection between upbringing and racism. There is no evidence that Jackson could consider babies to be racist.

However, there is one case that Republicans are now holding against her – that of Wesley Hawkins. In 2013, the then 19-year-old was on trial for being caught with pornographic images of underage boys on his laptop and cellphone. He had also published five videos of minors engaging in sexual activity on YouTube – none of which he had recorded himself. The judge in his case was Ketanji Brown Jackson. The strict US sex criminal law and the guidelines of the Sentencing Commission provided for a regular sentence of eight to ten years imprisonment for such a case, but the public prosecutor only asked for two, the defense just one day with subsequent surveillance for five years. Jackson sent the young man to jail for three months, house arrest for another three months, and ordered six years of follow-up surveillance, which included the possibility of searches of his home and computer. According to their own statements, the background to their decision was, among other things, that the minors shown in the pictures found were not much younger than Hawkins himself was at the time of the crime. Then, in 2019, Jackson decreed that Hawkins had to move into a transitional facility for the final six months of his tenure. The reason for the order is not public, Jackson himself said when asked that he could not remember it. MPs from the Republican Party now suspect that Hawkins has relapsed and accuse Jackson of dealing too laxly with the sex offender. A report of Washington Post suggests, however, that no new crimes have been committed.

In any case, it’s unlikely that Jackson’s nomination will ultimately depend on this case. It doesn’t even depend on Republican votes, because the Democrats have a razor-thin majority in the Senate, which ultimately makes the decision, until the midterm elections. However, this narrow majority also means that practically no decision is certain from the outset these days. Some conservative Democratic MPs are a constant risk factor for Biden’s plans. But Jackson’s personal details are comparatively uncontroversial, despite the Republican attacks, so that their confirmation is at least likely. Democrats hope to confirm Jackson’s nomination as early as April. Whether, should this succeed, it can actually be a new “consensus builder” will probably only become clear in the course of time. Your term of office would then not only be a sign of America’s modernization, but also a little hope that the highest instance of its jurisdiction can retain some independence.

this is the MIJIA Electric Scooter 3 Lite