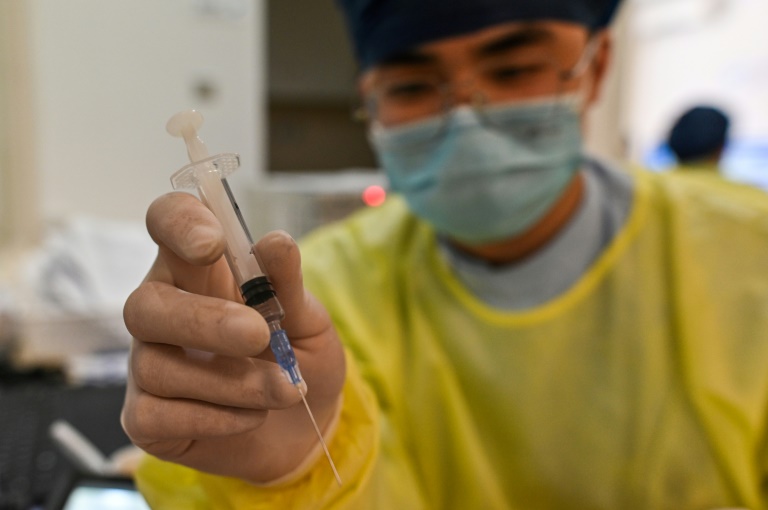 As China finally begins its exit from “zero Covid”, the low rate of vaccination of the elderly is worrying, the virus being estimated to cause the death of up to 2.1 million people.

A third of Chinese people aged 80 and over are still not fully vaccinated, out of a vaccination rate of less than 10% of the total population.

Health authorities announced on Wednesday a general easing of restrictions but experts warn that China could now face an uncontrolled rise in infections, for which its health system is not prepared.

Among the most exposed: the elderly, still reluctant. Ms. Sun, 76, thus assures AFP that she “will not receive any other dose”, after having accepted an injection in exchange for 100 yuan (14 dollars) and a bag of rice.

“There have been no cases in the area, and I rarely travel outside my neighborhood, so it is not necessary,” said this resident of Zhejiang province (east).

To arrive at this figure, she was inspired by the 5th wave which occurred in Hong Kong this year, where the hesitation of the elderly to be vaccinated was dramatic.

Of the more than 10,500 deaths recorded then, 67% concerned non-immune people and more than 95%, people aged 60 and over. The average age of the victims was 86 years old.

For nearly three years, Beijing’s strict health policy led to the confinement of neighborhoods and even entire cities, while the population had to be tested almost every day.

But the authorities did not want to impose a vaccination obligation, instead offering rewards – shopping vouchers, free meals … – to encourage the elderly to be immunized.

In July, when the city of Beijing wanted to restrict access to public places to only vaccinated people, it quickly had to give up in the face of the anger of the population, still traumatized by scandals linked to Chinese vaccines in recent years.

The “zero Covid” strategy has “tended to marginalize the role of vaccines in enforcement,” according to Yanzhong Huang of the Council on International Relations, a New York-based think tank.

And, unlike other countries where the oldest were a priority for vaccination, China preferred, by launching its campaign in 2021, to put employees in “high risk” sectors first, then people in working age.

Today, the absence of clear guidelines still makes Chinese seniors doubt the safety of vaccines, observes Ben Cowling, professor of epidemiology at the School of Public Health at the University of Hong Kong.

And the limited number of cases in China so far has meant that “the perceived benefit of vaccination is still quite small,” he explains: “If you are not likely to be infected…you you may not derive any benefit from vaccination”.

Local authorities should produce “easy-to-understand brochures” about vaccinations and rely on families to encourage their older members to get the shots, the Chinese government said last week.

In Beijing, Ms. Tian says her elderly parents and in-laws finally agreed to have a dose after seeing their neighbors do the same.

“If you see a lot of people you know lining up to get vaccinated, then you’re probably not going to be too worried about getting a shot,” she says.

But even if China manages to raise its vaccination rate, doubts persist about the long-term effectiveness of Chinese vaccines.

“Nationalism plays a big role” in this refusal, recently commented Yanzhong Huang, J. Stephen Morrison and Scott Kennedy in a text published by the Center for Strategic and International Studies.

Which “means Western formulas like RNA vaccines and antivirals are out of the game.”

Certainly, a study from the University of Hong Kong showed that three doses of Sinovac provide “high levels of protection against severe cases”, especially for those aged 60 and over.

If three doses of a Chinese vaccine indeed “effectively reduce” the number of deaths, China will have to offer RNA vaccines to immunize its population in the long term, advocates Xi Chen, associate professor at the school of public health. from Yale University.

When the 300 euros will come to the pensioner’s account