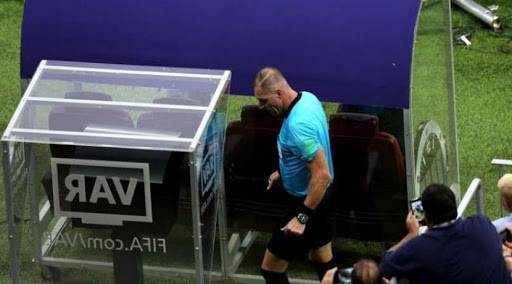 Marseille – AFP
Three years after his global debut in the World Cup in Russia 2018, the video assistant referee (VAR) is making his debut in the European Football Championship, at a time when opinions are still divided about it and its effectiveness in reducing refereeing errors.
The European Union “UEFA” for a long time resisted the idea of ​​using “VAR” in its continental competitions, before eventually succumbing to media pressure and the president of the Swiss International Federation, Gianni Infantino, who was one of the most prominent advocates of the use of this technology.
In September 2018, Slovenian Confederation President Aleksandar Ceferin bowed to pressure after a Russian World Cup in which he used VAR to a large extent, even in the presence of some critical voices, such as France’s penalty in the final against Croatia (4 -2) The VAR’s decision seemed fair to the party that received the penalty kick and unfair to Luka Modric and his companions.
Even without going to the extent of the opposition of his French predecessor, Michel Platini, to the use of this technology, which he called the “Great Damn” the former “roosters” star in November 2019, Ceferin was not entirely convinced by the use of VAR.
In December 2019, in an interview with the British newspaper “Mirror”, Ceferin referred to “a real chaos”, considering that the instructions for the technology were interpreted differently by country.
And he explained, “Some referees in England do not resort to him (VAR) even for a review, in Italy, they resort to him every half an hour,” believing despite all that that “there is no possible going back,” that is, to abandon the use of VAR. in Europe.